It's not the first time that a China-based health scare has impacted Chinatown. My doctor calls this "mass hysteria" and says you should most definitely go get some soup dumplings today. 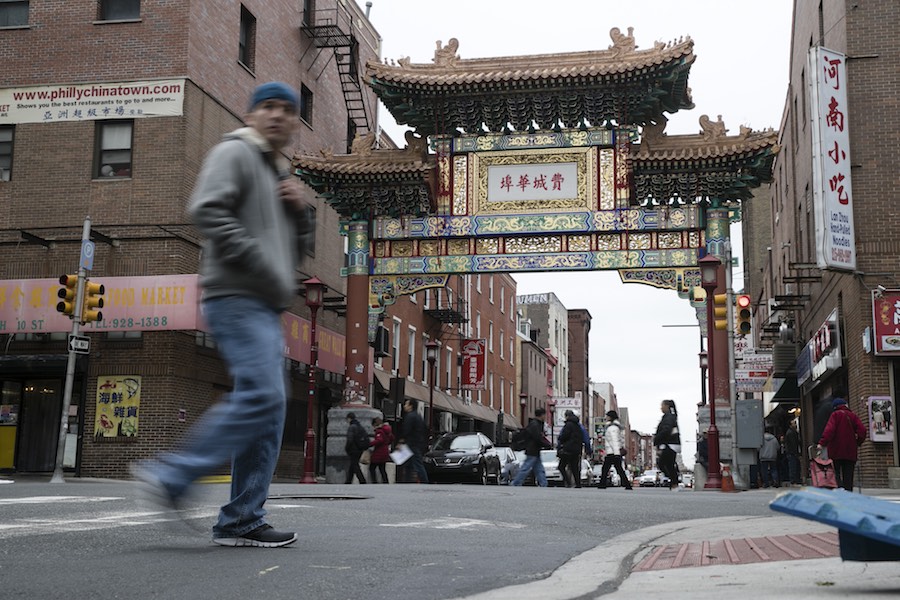 The Chinatown Friendship Gate at 10th and Race streets in Philadelphia, photographed in 2017. Now, some people won’t eat in Chinatown restaurants because of coronavirus. (AP Photo/Matt Rourke)

I was supposed to go to dinner in Philly’s Chinatown with a group of 10 tonight. But now that’s not happening. Why? You can blame the coronavirus. Or, rather, the hysteria over the coronavirus.

This all started a week or so ago, when my wife told me we would be meeting friends at a Chinese restaurant in Chinatown. I was excited. I love going to Chinatown.

Then, earlier this week, we got an email from the main organizer of this dinner. She explained that she and her partner aren’t “comfortable” eating in Chinatown. She’s concerned that she (and we) might somehow contract the coronavirus by heading to Race Street for some egg rolls and lo mein and that free tea they pass out.

Okay, so that’s one person with a very paranoid and, arguably, racist view of things, right? Well, it turns out she’s not the only one crossing Chinatown off her list for the time being.

I thought my anti-Chinatown friend’s aversion was odd. So I mentioned it to a few acquaintances, just conversationally. None of them thought it was particularly wrongheaded to avoid Chinatown while the coronavirus is still a thing. Two said point-blank that they wouldn’t step foot inside a Chinatown restaurant until the world gets an all-clear.

Okay, okay, so that’s a few people with a very paranoid and, arguably, racist view of things. A very small sampling. So I opened the question up for more input via — what else? — Facebook polls. I placed the polls in two local Facebook community groups.

Restoring my faith in humanity to some extent, the majority of respondents to both polls said they had no issues eating in a Chinatown restaurant. But (you knew there had to be a but coming, right?) there were plenty of people who said they did.

In one of the admittedly unscientific polls, with 69 people responding, a third said they wouldn’t eat in Philly’s Chinatown until the coronavirus scare is over. And in the other poll, with more than 100 respondents, close to 40 percent said they’d avoid Chinatown restaurants for now.

One respondent noted that she and her husband were planning to go to Chinatown this Saturday, but she claims she asked her doctor about doing so and that her doctor actually advised against it because of, yes, the coronavirus.

“There is mass hysteria about this coronavirus,” says my doctor, Penn’s Mike Cirigliano, who thinks the woman’s doctor is “crazy” if that’s the advice that was actually given. “You need to remind people that the flu kills 35,000 people a year. So what people should really fear is not getting a flu shot. I mean, I wouldn’t advise you to fly to Wuhan right now. But if I didn’t have plans tonight already, I would take you out to dinner in Chinatown with no trepidation whatsoever. And I would have the duck. People are worried about the birds. I mean, c’mon!”

Still, in spite of logic, science, and the opinions of esteemed medical professionals, people are clearly having some major coronavirus anxiety here in the Philadelphia area. Just last week, a Chinese New Year celebration on the Main Line — billed as the region’s biggest such celebration — was canceled by organizers “out of an abundance of caution.”

I asked the organizer if there were performers or vendors involved with the Chinese New Year festival who had recently traveled to affected areas. She said no, but the festival was, nonetheless, canceled. And keep in mind that this was before there was a single confirmed case of human-to-human transmission of coronavirus in the United States, of which there is now exactly one. Nowhere near Philadelphia.

I reached out to several Chinatown restaurants to get an answer. In some cases, there was a language barrier that prevented conversation. In other cases, the restaurant owners or managers just didn’t want to discuss the matter.

“I’m sure their business is impacted,” says one Philly entrepreneur with close ties to Chinatown. “But they’re never going to go on the record with the press about it.”

John Chin, executive director of the Philadelphia Chinatown Development Corporation, says it’s too early to know for sure how the restaurants in Chinatown are being — or will be — affected by fears over the coronavirus. But he says he’s heard, anecdotally, that “things are slow in the neighborhood.”

If that’s the case, there’s historical precedent for it here in Philadelphia.

Back in 2003, business in Chinatown took a nosedive amid concerns over the SARS virus, which also originated in China. So then-mayor John Street headed to Chinatown with 30 staff members to show everybody it was perfectly safe to eat there. 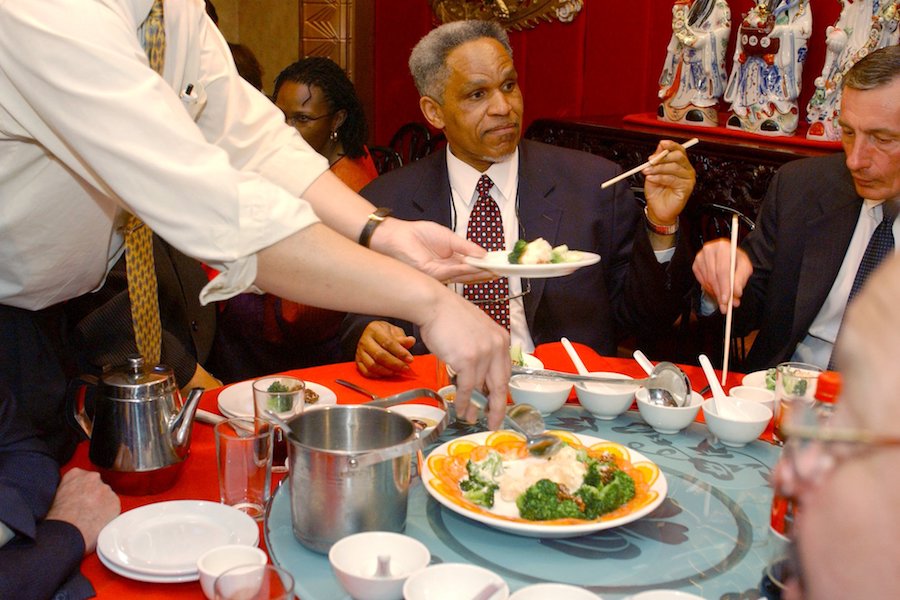 Before the current coronavirus outbreak, there was SARS, which negatively impacted Chinatown restaurants in Philadelphia. On April 14, 2003, then-mayor John Street ate in Chinatown to show the public it was safe. (AP Photo/Sabina Louise Pierce)

“There’s great eating, and there’s nothing to be afraid about,” Street said during the meal, according to an account in the Inquirer. “I’m going to have a little bit of everything.”

That Inquirer story went on to say that business in Chinatown was reportedly down 40 to 60 percent. Once all was said and done, there were 27 confirmed cases of SARS in the United States. Deaths? Zero. You had a much, much better chance of catching the flu than of catching SARS, and, as Cirigliano pointed out earlier, the same is the case with the coronavirus.

Therefore, Philadelphia, whatever eating-out plans you have for this weekend, I say cancel them and head to Chinatown. Turn your back on racism, xenophobia, paranoia, ignorance, and whatever else you want to call it, and instead show support for the neighborhood and community.

And by all means, enjoy the soup dumplings.