Cabin Fever Chronicles: Looking to Foster a Pet in These Stressful Times? Take Mine. Please.

A few things you should know about cats — or my cat, anyway — before taking in a lockdown companion. 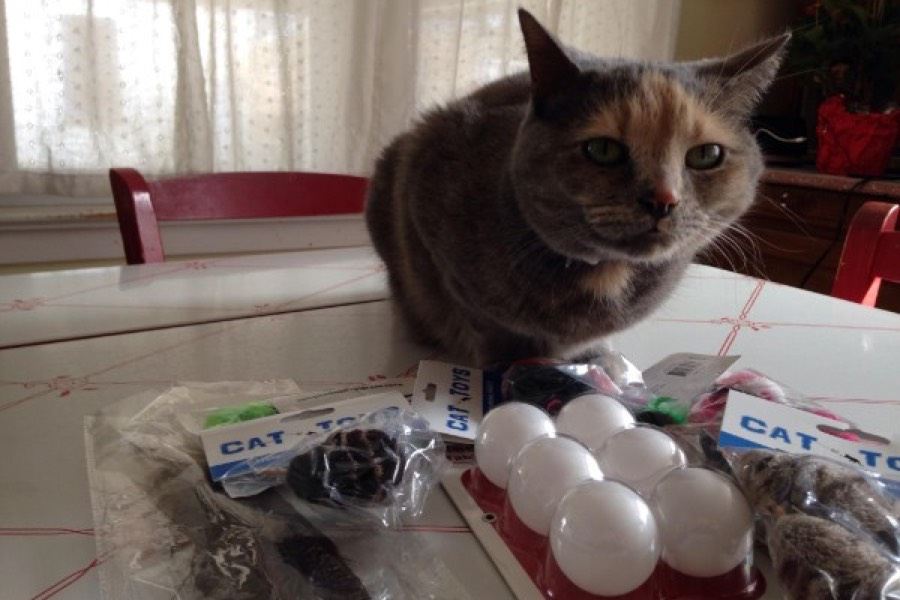 Welcome to the Cabin Fever Chronicles, in which the author, stuck at home, muses on the perils of coronapocalyptic existence.

Last week, both the New York Times and the Washington Post offered up deeply heartwarming articles about how all across the U.S. of A., lonely, virus-isolated humans are procuring pets to provide them with companionship. There’s been a particular surge in New York City in applications for fostering — short-term housing, feeding and care for critters. Applicants are saying they were always interested in pets but didn’t feel it was fair to have them, since they (like most Americans) are never at home. As Katy Hansen, a spokeswoman for Animal Care Centers of NYC, explained it, “For people that are by themselves, having another heartbeat in the house makes it feel less lonely.” Friends, this is a big pile of shit — a metaphor that pet companionship brings new meaning to.

A few years back, I inadvertently acquired a cat. Believe me, I didn’t mean to. My kids were grown, and my house was finally my own, after many years of many cats and one very big but very good-natured mutt. That dog was so awesome that if it hadn’t been so hard to lose him to cancer, I would have gotten another dog ASAP.

But this cat needed a home. She was a small cat, not particularly attractive, cat-colored and cat-shaped, with cat-like eyes. She didn’t seem especially nice, let alone affectionate. Still, she appealed to my nurturing instincts. Into the house she came, and she’s still here.

The cats I used to have were outdoor cats. When we lived in the city, that sometimes meant they didn’t live long. They did better here in the suburbs. But somewhere along the way, I hung out a bird feeder and started watching birds and read about how cats, even ones that are affectionate, are killing billions of birds every year, and between the premature deaths of both cats and birds, I decided this cat would have to live inside.

This didn’t seem to be a problem, because she’s extremely excitable. If Stephen A. Smith, for example, is a 10 on a one-to-10 scale of excitability, this cat’s an 18. She lives in a constant state of high alert. A rustle of wind makes her shoot up the stairs in terror. The slightest shift in position while I’m watching TV on the couch sends her tearing off to cower in the basement. If you cough, she bolts. Let outdoors, she’d have a feline coronary in 10 seconds flat.

Perhaps as a consequence of this nervousness, the cat’s not, as I mentioned, very nice. She’s clawed at babies. She’s drawn blood from ankles. She once launched a full-tilt teeth-bared attack at one of my in-laws. (Hey, no one’s all bad.) I’m the hand that feeds her, and she bites me regularly. Somehow I always imagined, though, that her meanness was mostly my fault. Like those New Yorkers, I was hardly ever home. She simply needed more attention than I was able to give her. If I had been around more, I told myself, she’d be nicer, just as my kids would have turned out nicer if I’d stayed home with them.

We’re on Day 17 now of my new work-from-home regimen, and I’m here to tell you: This cat’s a total bitch.

I’m with her 24/7. I’m lonely and worried and bored and anxious myself, and constantly on edge. I could really use a soft, furry, loving companion. One that sat on my lap and let me stroke her. Even one that sat on my computer keyboard at the worst possible times.

And what do I get? A cat that sleeps for 22 hours out of every day. Who only emerges at breakfast and dinnertime, and only to meow insistently and incessantly until I provide her with cat treats and clean her litter box. A cat for whom the last thing I did as all hell broke loose and life as we knew it was ending was order $63.55 in handmade artisan cat toys in the forlorn hope that I could entice her into playing with me while I’m stuck at home.

The cat toys arrived the other day. I brought the box inside gingerly, opened it, and washed my hands for 10 minutes. The cat took a look at the array of tiny, expensive, painstakingly crafted bees and worms and birds, yawned, and went back to sleep.

Instead, I opened my heart to this small, heartless creature, fed her, housed her, even took her to the vet, where from inside her cat carrier she terrorized trained animal-handling professionals to the point that they placed said carrier in a tent and pumped in sleeping gas so they could vaccinate her. She’s watching me right now, with her sleepy cat eyes. And in those eyes, I see a terrible truth: When I die, she will eat me. She’s patient. She has no shame. She’s a cat. She’s got all the time in the world.