Five years ago, we were told to expect a new and improved bridge … this year. So why are we stuck with a crumbling colossus, monster icicles and dripping white goop? 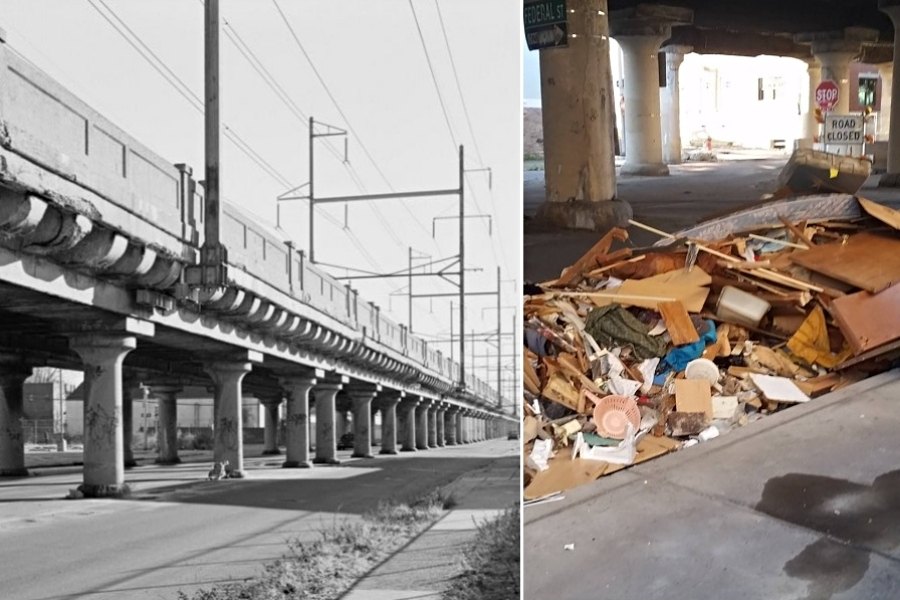 L: The 25th Street Viaduct in 1968, via the Library of Congress | R: Dumping under the viaduct in 2018, photo courtesy of Erica Townsend

Raise your hand if you remember when, in 2015, City Councilmember Kenyatta Johnson stood with officials from the railroad company CSX, shovel in hand, and announced plans to renovate the crumbling 25th Street Viaduct in South Philadelphia.

Here at Philadelphia magazine, we remember. Back then, our reporter — like many others at various outlets — blasted out the welcome news. We were relieved: After all, though CSX has maintained that the bridge is structurally sound, sections looked like they could tumble any minute. The month that the renovation plans were announced, a piece of concrete fell from the infrastructure and shattered the windshield of a passing car.

“Well then, it sounds like in five short years, we’ll have a new and improved bridge on our hands,” Philly Mag wrote at the time of the announcement. (Wishful thinking! How cute!)

Five years have now passed — none of which I’d call “short” — and there’s no new-and-improved 25th Street Viaduct in South Philly, despite initial claims that the project would wrap up this year. Residents are ticked off and asking: What the hell happened?

Johnson, for his part, blames CSX — and the city, a little. CSX says it’s started some of the work, including placing a net under the bridge to catch falling concrete. Otherwise, the company hasn’t been very forthcoming about its progress and the delays.

What we’ve gotten after five years, folks? Not a renovated viaduct, just more of the same old problems. Neighbors say the 1.2-mile-long eyesore of a bridge is still breaking apart, not to mention attracting illegal dumpers. Oh yeah, it’s also leaking a white liquid that stains their cars … among other problems. And the entities that were supposed to see it fixed this year are shrugging their shoulders.

The 25th Street Viaduct, formerly a railroad track known as the Delaware Extension, was born in 1863, amid the nation’s first great railway building boom. The Pennsylvania Railroad built the tracks, at ground level at first, to provide access to the city’s ports at Girard Point (near where the Schuylkill River flows into the Delaware) and Greenwich Point (east of the Navy Yard), as well as to transport coal to PGW in South Philly.

In 1913, Mayor Rudolph “The Dutch Cleanser” Blankenburg (what a name) announced plans to elevate the tracks. Much like the recent renovation proposal, Blankenburg’s plans were delayed and eventually completed in the late 1920s. (Let’s hope CSX’s proposal doesn’t take that long.) 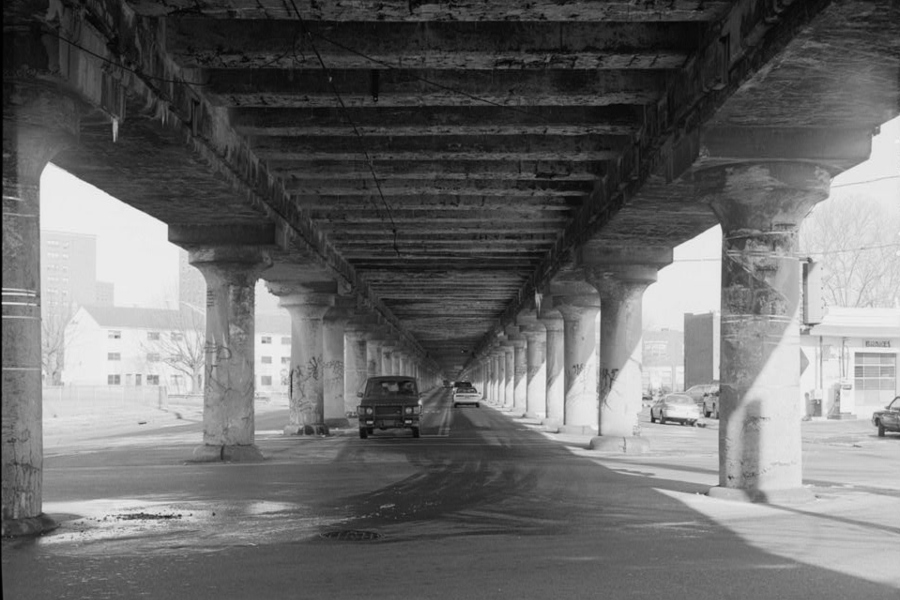 The viaduct is still active today. CSX became its fourth owner in 1999, after the Florida transportation and real estate company purchased it from Philly-based rail corporation Conrail. The bridge’s two tracks are mainly used for freight; CSX operates a train yard in South Philadelphia, and the viaduct serves other businesses as well. These include the fire-damaged Philadelphia Energy Solutions refinery, which used the tracks to transport oil products. (PES announced it would close this past summer after the infamous explosion on the property; CSX says the refinery shutdown will have little impact on the viaduct’s train frequency.)

The 25th Street bridge stretches just over a mile, from the Schuylkill River and Washington Avenue down to Passyunk Avenue, cleaving Point Breeze from Grays Ferry. There are four lanes of vehicular traffic under and around the viaduct: two lanes below, and one lane on either side of the bridge, running parallel to the tracks. (Only two lanes are currently in use, according to the Streets Department.) The structure is held up by three-feet-wide pillars — large concrete barriers that sometimes block drivers’ lines of sight when they’re crossing beneath the tracks.

The pillars, a lack of traffic signals, the absence of streetlights (they were removed by the Streets Department as part of the renovation project), and the presence of four traffic lanes make crossing beneath the viaduct an adventure, neighbors say. Other issues with the bridge? The aforementioned white liquid, and giant icicles that form and hang from that protective netting CSX installed in 2015 to catch falling concrete.

“The icicles that hang down are the size of swords,” South Philly resident James Gitto says. “You drive under there and walk under there, and you’re, you know, dancing with death.”

Streets Department Deputy Commissioner of Transportation Richard Montanez says the protective netting installed by CSX as part of the first phase of the renovation project prevents the agency from replacing both the streetlights and the traffic signals. The persistent darkness, according to both neighbors and the Streets Department, has encouraged heaps of short dumping (think: massive piles of bricks, mattresses, car parts, trash and more).

Gitto, who’s president of the West Passyunk Civic Association, says residents complain about viaduct issues at the organization’s monthly meetings (as in, at every single meeting). The group has reached out to Johnson’s office as well as to CSX via email multiple times since 2015, Gitto says, but hasn’t received any substantial updates on renovation. “I feel like it’s one of those classic Philadelphia things where [officials] went and cut the ribbon and everything stopped immediately after the cameras left,” Gitto says.

Councilmember Johnson acknowledges in a statement to Philadelphia magazine that the “delay in the project has brought down the quality of life in the area” and has contributed to an increase in trash and illegal dumping. He says he “discussed the 25th Street Viaduct issue with CSX and the Streets Department several months ago to get an update on the project.” 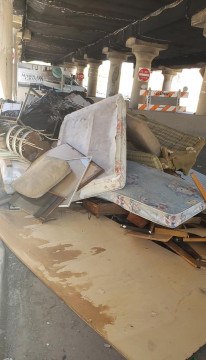 Dumping underneath the viaduct | Photo via Erica Townsend

“While CSX has done some repairs to the 25th Street Viaduct over the past five years, I have been very disappointed by the failure of the Philadelphia Streets Department and CSX to move the project forward,” Johnson says, adding that he hopes “Streets Department and CSX will finally settle their differences on this issue as soon as possible and make the needed repairs to the area.”

But the Streets Department maintains that it’s not hindering any progress. Montanez says workers can’t replace traffic signals and streetlights, which would discourage dumping, until the netting underneath the viaduct is gone. He blames the lack of progress on the fact that railroads are federally regulated and says CSX has told his department not to mount anything on the structure without the company’s permission.

“We are not the delay,” Montanez says. “It’s a quality-of-life issue to us, and so we do want it resolved. We want CSX to do their due diligence and repair the structure so Streets can once again restore the equipment that was there prior to them putting up the netting.

“If the netting is going to be there indefinitely, we would have to look at another [lighting and traffic signal] project [that] would entail trenching the street, putting in conduits [for wires], installing foundations, and putting in poles for streetlights,” Montanez adds, stressing that such a project would require capital budget funding.

In an email, CSX doesn’t offer any insight as to when neighbors can expect progress on the renovations — or any reason for the delays. Instead, the company says it conducts “thorough” examinations of the bridge at least once a year and “continues to maintain ongoing communication with the City of Philadelphia on next steps for [the] project.”

CSX has removed language from its website regarding the project, replacing it with a “project subscription form” through which people can subscribe via email to receive information about the renovations “when it becomes available.”

The next steps for the company, according to the plan put out in 2015, would be to repair and replace the viaduct’s drainage system, waterproof the decking that supports the railroad tracks, remove the debris net, and resurface the underside of the viaduct. But this time around, we’re not making any guesses as to when that will happen.