By Defending Bloomberg on Stop-and-Frisk, Nutter Tarnishes His Legacy and Betrays Philly

The former Philly mayor is on the campaign trail, backing one of the most blatant forms of state-sanctioned racism. This isn't just disappointing; it sets a scary precedent. 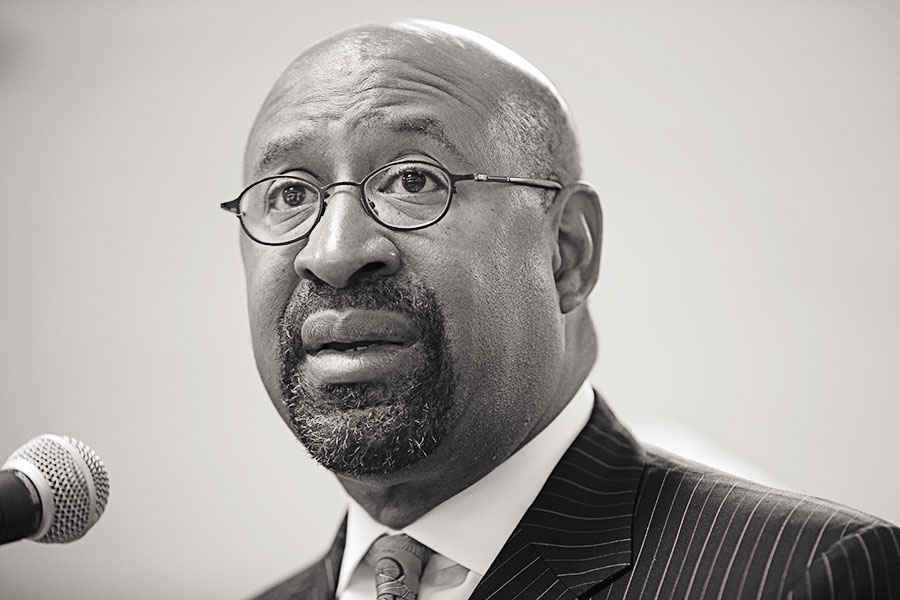 In defending Michael Bloomberg on stop-and-frisk, former mayor Michael Nutter’s use of the policy is coming under fire. | Photo: Associated Press

There’s an oft-quoted line from the Batman film The Dark Knight that goes: “You either die a hero, or you live long enough to see yourself become the villain.”  I couldn’t help but reflect on that line as I read headlines reporting that former Philadelphia mayor Michael Nutter wasn’t apologizing for the controversial police policy known as stop-and-frisk.

“I wanted to focus on getting guns off the street and stop brothers from killing each other,” Nutter said during a recent interview on WHYY while discussing reports from 2007 that there were 391 murders in Philadelphia a year before he began his first term. “That’s slightly more than one a day, so I thought we needed to do something.”

That “something” was a police policy that violated the self-respect and dignity of thousands of mostly black and brown men who were innocent. I can still remember the times I was stopped and frisked just a block away from my alma mater, the University of Pennsylvania, in broad daylight. Those triggering experiences instilled in me a heightened sense of caution when I walk in public spaces — one I haven’t been able to shake. I was one of thousands of black men who became collateral damage in Nutter’s “something.”

In 2010, the American Civil Liberties Union of Pennsylvania sued the city for such actions. In its federal class-action lawsuit, it alleged that “thousands of people each year are stopped, frisked, searched, and detained solely on the basis of their race or ethnicity by the Philadelphia Police Department as part of its stop-and-frisk policy.”

The city would later settle with the organization and agree to terms meant to stop racial profiling. And while there has been some reduction of stop-and-frisks, the policy still disproportionately plagues marginalized communities within the city.

Nutter, a black man, will have to live with the fact that he advanced a policy that traumatized people who look just like him. After years of credible research have consistently shown that stop-and-frisk is ineffective as a crime deterrent, for him to double down on its usage while championing one of its biggest proponents, Democratic presidential candidate Michael Bloomberg, is a slap in the face to the city.

As mayor of New York City from 2002-2013, Bloomberg had the NYPD stop and frisk people more than five million times, and this policy disproportionately affected black and brown men. Victims under his stop-and-frisk regime — most notably the late Kalief Browder, who spent three years on Rikers Island without being convicted after his stop-and-frisk at age 16 — have been forever traumatized as a result.

While criminal justice reform and the Black Lives Matter movement gained traction, Bloomberg continued to defend the racial profiling of black and brown men after his terms as mayor. “Ninety-five percent of your murders and murderers and murder victims fit one M.O. You can just take the description and Xerox it and pass it out to all the cops,” he said during an appearance at the Aspen Institute in 2015. “They are male minorities 15 to 25.”

“Why’d we do it? Because that’s where all the crime is,” Bloomberg added when discussing why the NYPD targeted neighborhoods of color. “And the way you should get the guns out of the kids’ hands is throw them against the wall and frisk them.”

Some observers may claim that Nutter is only standing up for Bloomberg because he serves as the national political director of the latter’s presidential campaign. But that Nutter joined the Bloomberg campaign in the first place is proof enough that he agrees with the policy. And his acquiescence sets a disgusting precedent for the Democratic Party.

When a candidate chooses to deny the facts, humanity, and constitutional rights of the very voters he is wooing, that candidate doesn’t deserve our respect. In seeking to exonerate Bloomberg, Nutter is trying to expunge his own legacy as well. By minimizing the role of stop-and-frisk in the further marginalization of vulnerable populations, Nutter is divorcing himself from reality — and accountability.

If we let any liberal or progressive try to defend stop-and-frisk in any way, we are dismissing the lived experiences and activism of those we claim to champion. I can’t view Nutter as a hero — only as a villain — so long as he defends his and Bloomberg’s poor decisions on stop-and-frisk.