We counted seven Scabbys (or is it Scabbies?) along 6th and Chestnut streets as part of a building trades demonstration outside the Public Ledger Building. 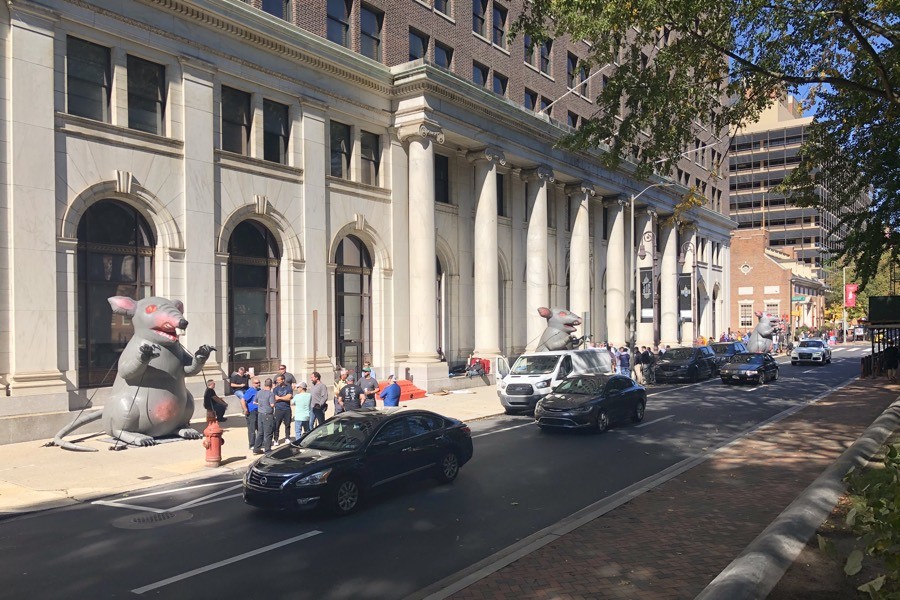 Let’s get one thing out of the way: The rodent infestation you might have seen on Monday and Tuesday in front of the world’s biggest Wawa has nothing to do with hoagies.

No, the mischief of Scabby the rats that descended in front of the Public Ledger Building — where Wawa just happens to be a tenant — have their inflatable bloodshot eyes on a New York City-based development company by the name of Heights Advisors. According to the union members protesting, Heights has been hiring nonunion labor to perform demolition inside the building. (A representative for the company couldn’t be reached for comment.)

So the local building trades, as they are wont to do, decided to bring out a Scabby contingent to try and get some attention.

“Contingent” might be understating things, really. We’re not quite sure we’ve ever seen this many Scabbys all in one place. One union member, who declined to give his name, said he thought the seven total rats — each one expressing solidarity on behalf of a different local — was an all-time record, too. 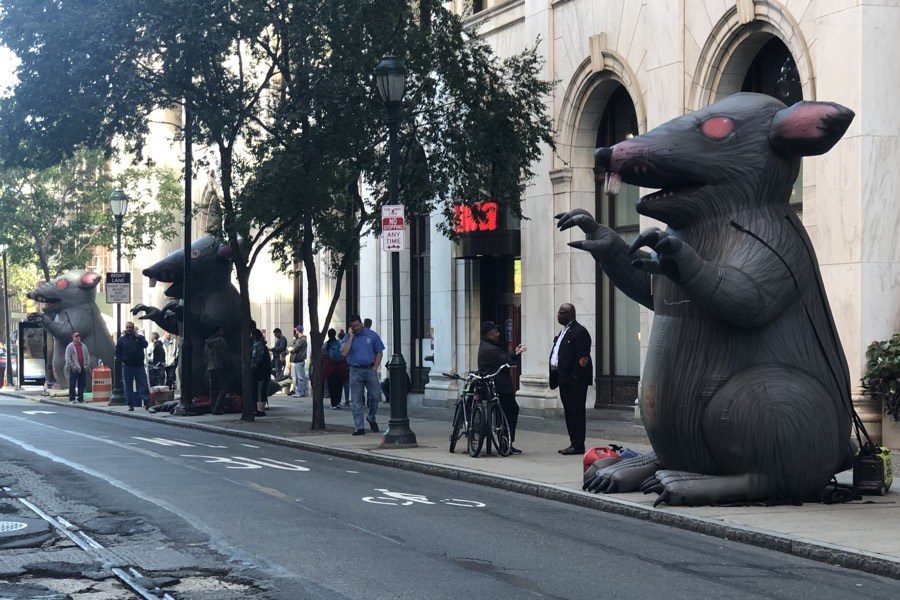 Judging from its website, Heights Advisors appears to be most active in Brooklyn. But the company isn’t entirely new to Philly. Heights was also involved with the recently renovated “West Lofts,” housed in the former West Philadelphia High School. (That development was not without its own share of controversy.)

We tried to find out more about the work going on inside the Public Ledger Building, but the various building trade members present on Monday were pretty tight-lipped. No one wished to even share their specific local affiliation, the rationale being that their efforts would be better served by presenting a unified, nondenominational front.

Still, it was pretty easy to get an idea of the cast of characters, since nearly everyone protesting was wearing clothes bearing the name of a particular local. We spotted the following groups in attendance: Laborers Local 332, Glazers Local 252, Roofers Local 30, Sheet Metal Workers Local 19, and Steamfitters Local 420.

Although Scabby the rat was mostly among friends on Monday, the rodent is not without human opponents. Many unfair labor practice cases have been filed before the National Labor Relations Board over Scabby’s 30-year history, attempting to claim that the rat constitutes a form of coercive illegal picketing. (The argument is essentially that Scabby is so fearsome it coerces people not involved in the labor dispute into supporting the unions.) Courts have typically trashed that argument, upholding Scabby as protected First Amendment speech. In 2011, the Obama NLRB ruled in favor of Scabby as well.

But recently, the NLRB’s general counsel — who’s a Trump appointee — made an about-face, deciding that now is the time to bust out the Uncle Sam–sized rat trap and take on Scabby yet again. In July, the NLRB filed an anti-Scabby brief in a case about Philly Local 98’s use of the rat during a hotel protest back in 2018. That case, which could have implications for the entire family of Scabbys nationwide, is still ongoing.

At least for now, the rat is legal — and as inflated as ever. But if the NLRB has its way, he may not be around forever, so you may as well get another glimpse while you know you still can.