Progressives, Your Support for Safe Injection Sites Is “White Lives Matter” by Another Name

Backing efforts to end America’s opioid epidemic is noble, but you need to think through why people of color who have endured similar atrocities aren’t automatically standing with you. 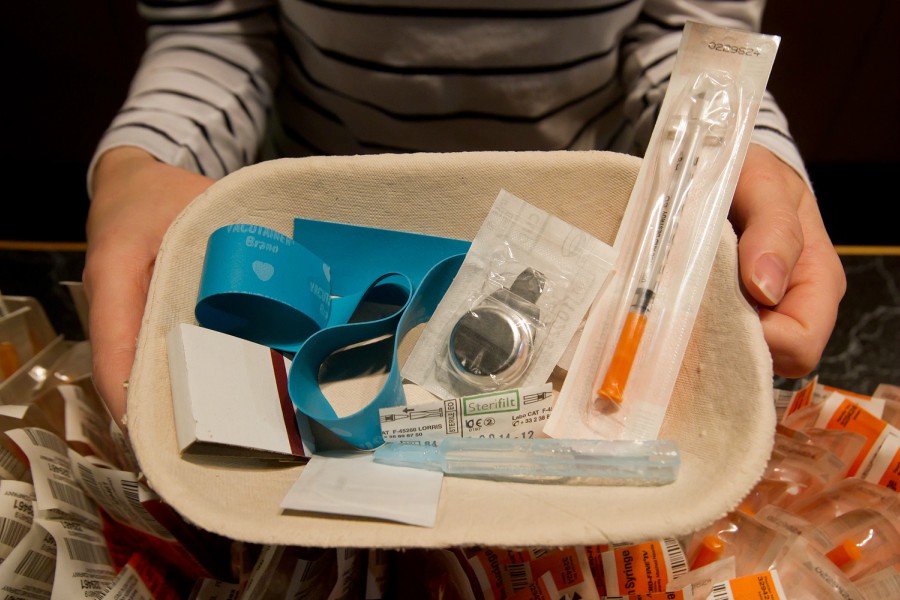 A registered nurse holds a tray of supplies to be used by a drug addict at the Insite safe injection clinic in Vancouver, B.C., on Wednesday May 11, 2011. (AP File Photo/The Canadian Press, Darryl Dyck)

The decision, although expected to face more legal challenges, is an undeniable breakthrough for proponents who have pushed back against the U.S. Attorney’s assertion that such sites would serve more as crackhouses than treatment facilities.

But despite the fact that more than 1,100 people died last year of accidental opioid overdoses in the city, support among Philadelphians for such a facility remains split. Reactions to the court’s ruling on my social media feeds revealed very stark contrasts: Most of my older Black followers were against the decision, while many of my white followers were in favor. There appeared to be mixed support among diverse millennials. However, the more outwardly progressive the commenters claimed to be, the more they appeared to approve of safe injection sites.

Similar sentiments were reflected in the positions taken by this spring’s City Council primary candidates. According to the results of a Philadelphia Inquirer questionnaire filled out by the 54 Democrats and Republicans who ran for City Council, half of them opposed safe injection sites, while 18 were in favor and 9 didn’t respond on the issue. Most of the progressive white candidates who ran supported safe injection facilities, while a large majority of Black candidates didn’t. Even more revealing was the fact that only three of the City Council incumbents who ran for reelection supported it (Helen Gym, Allan Domb, and Jannie Blackwell), while the remaining 12 who also ran were either against it or didn’t take a position.

Advocates frequently dismiss those who are still on the fence about safe injection sites as either ignorant or heartless. But I was one of those people — and even now my support is tempered with caution. It’s hard to deny that too many lives have been irresponsibly lost due to this epidemic, but the basis of my change of opinion is solely due to the data pointing to it as being the most feasible way of helping reverse the trend.

Why is this such a fraught issue for me and others? The movement pushing for safe injection sites appears to be framing it as a predominately white issue in a city that has a majority of color already facing a myriad of other problems.

My initial reluctance to back safe injection sites stemmed from a lot of white progressives touting that the opioid crisis is one of the most devastating public health crises in American history. It’s true that this epidemic affects white populations disproportionately, but if you ask Black and brown people which crisis has been the most devastating public health issue in their lifetimes, many will point to the crack epidemic, or HIV/AIDS, or gun violence — three problems with multigenerational impact in communities of color.

“People of color must not support safe injection sites, especially if those sites are not accompanied by a comprehensive plan to right the wrongs of the crack era,” wrote Solomon Jones, a Black activist and columnist in a 2018 Inquirer op-ed. “Blacks were criminalized for the same thing that our city now proposes supporting for mostly white heroin addicts.”

“It’s taken a long time for us to hit rock bottom here,” said City Councilwoman Maria Quinones Sanchez, whose 7th District encompasses Kensington, to reporters. “Do we want to now send a message that you can come here and buy the cheapest drugs available and then actually have a place to use them?”

Although no one in my immediate family suffered from crack-related addiction, the war on drugs created policies that harmed the communities we lived in. The newfound sympathy and advocacy for those struggling with opioid addiction is largely related to who the face of the crisis is. When white people suffer, the public is called to take immediate action. When Black and brown people die, the sense of urgency isn’t reciprocal. When people prioritize the necessity of safe injection sites in a city where Black and brown communities have been calling for a resolution to gun violence, poverty, and anti-discrimination, it feels to us like someone chanting “white lives matter” at a Black Lives Matter protest.

There is a way for the city to tackle these urgent matters, but it will require those who are more powerful and privileged to have deference for those living in diverse communities, such as Kensington, where a proposed safe injection site is intended to launch. It will take advocates of the safe injection sites recognizing deep-seated racial disparities and finding ways to negotiate funding and resources that not only serve those afflicted by opioid addiction, but those living in their neighborhoods as well.

Simply put, white Philadelphians need to keep that same energy for addressing racial disparities within poverty, gun violence, and discrimination as they do when calling on the city to rally behind safe injection sites. This is the kind of restorative justice that will help prioritize all lives while still holding nuance for diverse communities still being left out of the conversation.