The state’s Bureau of Forestry says we’re in for a “great fall foliage season!” 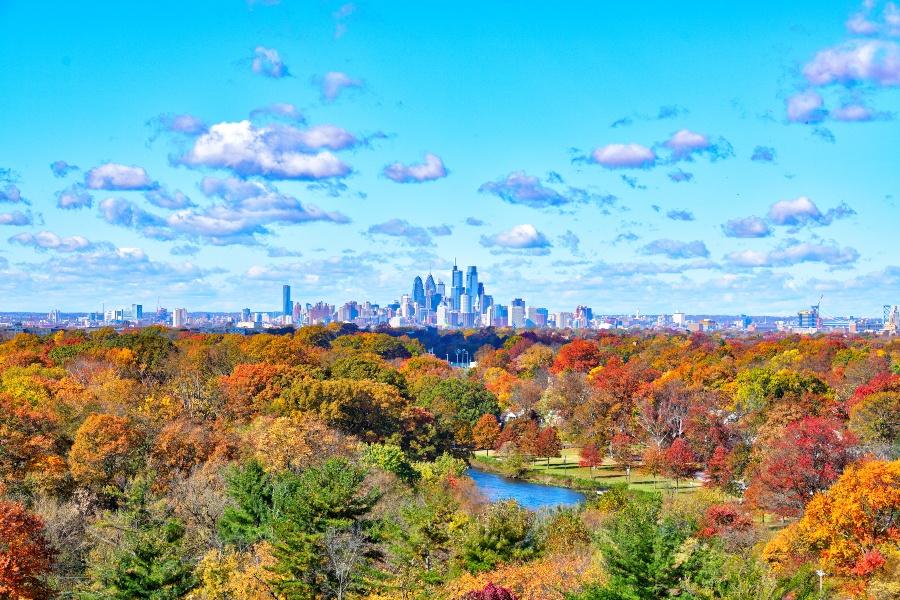 The best time of the year — leaf-peeping season — is almost upon us.

Pennsylvania’s Bureau of Forestry (yes, such an entity exists, and it’s a very, very important one) has released its first fall foliage report of 2019, giving us eager folks a look at when leaves are expected to be their most colorful this year.

Right now, trees in Pennsylvania are still pretty green — except for in the northeastern Wayne and Susquehanna counties, where leaves are approaching their peak color, according to the Bureau of Forestry. (If you’re sick of all the hot weather and ready to experience autumn a little early this year, you might want to plan a road trip north this weekend.)

Trees in Philadelphia and the surrounding counties are expected to reach peak color in three weeks to a month, per the Pennsylvania Department of Conservation and Natural Resources. Prime time for local leaf-peeping excursions should arrive somewhere between October 21st and 28th and last as late as mid-November.

We know what you’re thinking: Aren’t we in for some unseasonably hot temperatures in the next few days? And could those temperatures affect leaf color? Yes and yes.

The DCNR says unseasonably warm weather could delay the onset of fall color in areas receiving rainfall — but it could also speed up color change and leaf drop in dryer areas. Either way, though, don’t worry too much: Our state’s leaf-peeping experts say Pennsylvania forests “seem less affected by fungus this year and appear poised to deliver a great fall foliage season!”

The map below shows where leaf color currently stands in Pennsylvania’s 67 counties. Yellow regions, as mentioned, will reach peak color in one week, while light green counties are expected to experience peak color in two or three weeks. 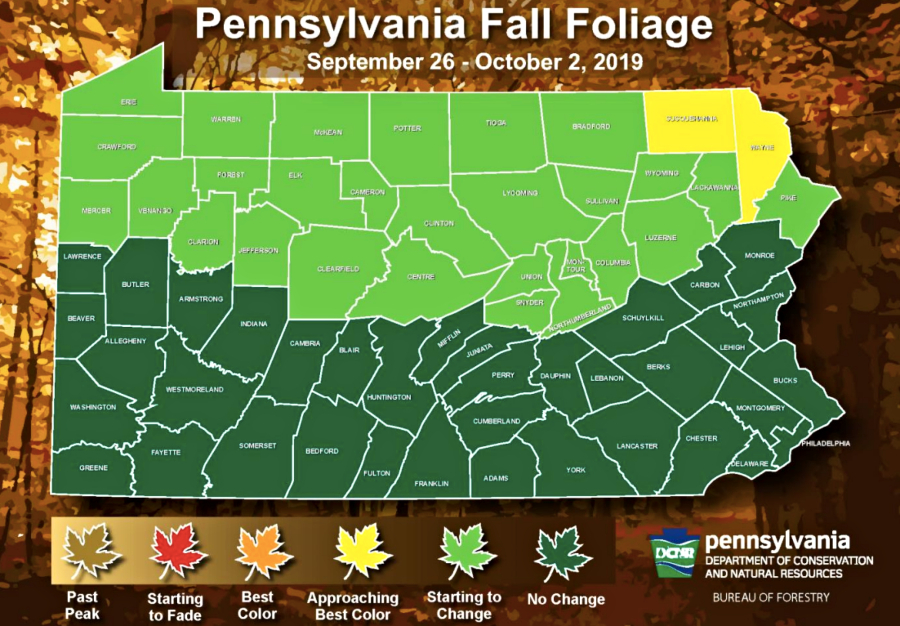 Pennsylvania has a longer and more varied fall foliage season than any other state in the nation — or anywhere in the world, according to the DCNR. Only three regions across the globe support the deciduous forests that display fall autumn color: Eastern North America, the British Isles and parts of northwestern Europe, and Northeastern China and northern Japan.

The state is well-poised as the meeting ground of Northern and Southern tree species. (Northern tree species in Pennsylvania include gray and paper white birches, mountain maple, American mountain ash, quaking aspen, and pin cherry, while Southern ones include black gum, black walnut, flowering dogwood, southern red and scarlet oaks, magnolias, persimmon and pawpaw. May all of this information bring a little more appreciation to your heart as you embark on your 2019 leaf-peeping journey.)

Wondering where you can find optimal leaf-peeping views? The DCNR offers an interactive map of prime fall foliage locations, as well as directions for scenic driving tours through the southern and northern portions of the state. If you want to stay local, we’ve rounded up 10 nearby fall foliage hikes and walks. Go forth!