Some 30,000 people came out to watch the Owls beat a nationally ranked Big 10 team over the weekend. If ever there was a time to move forward with an on-campus stadium, this is it. 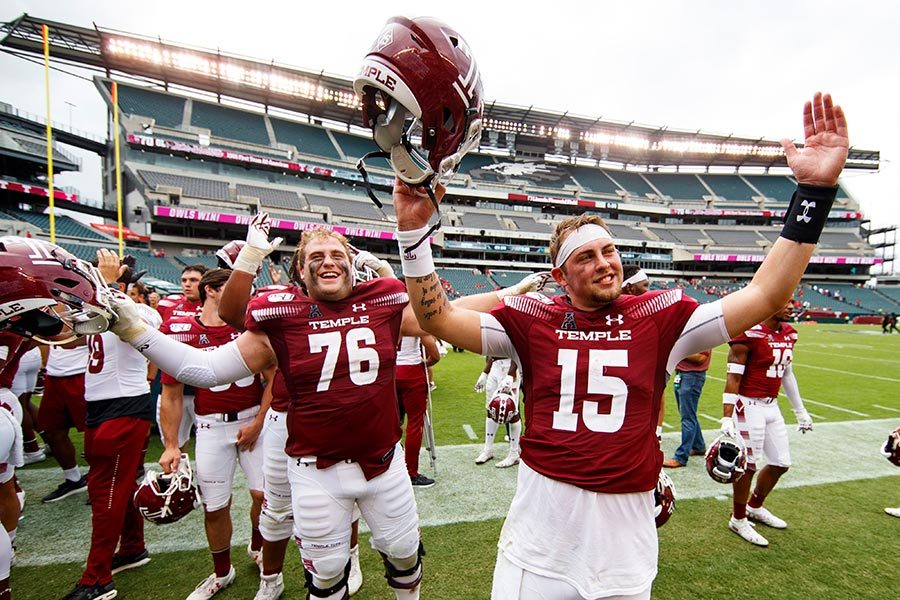 Temple players celebrate a 20-17 win over Maryland in front of entire levels of empty seats at the Linc. Photo by Chris Szagola/AP

It is an unusually warm day for football — 80 muggy degrees under a cloudy sky. The Temple Owls are playing the Maryland Terrapins, the 21st-ranked team in the country.

Suddenly I am taken back to my own, unremarkable football career at Temple, some 25-plus years ago — I watched more than I played. Back then, we spent warm Saturdays in September facing the likes of the University of Miami — yes, that Miami, “The U” of Warren Sapp, Dwayne Johnson, and Ray Lewis — and Penn State, along with the rest of the powerful Big East teams of the ’90s.

As we inevitably received our comeuppance against teams with which we had no business sharing a field, I wondered what would become of our football program. Here we were, in front of 6,000 sweaty spectators in a cavernous mausoleum called Veterans Stadium, enduring public floggings week after week that would cause even the heartiest diehards to avert their eyes.

But 25 years forward, on Saturday, here we are again, but this time we are holding our own against a nationally ranked team. Some 30,000 plus people have come out to watch Temple play — CBS is even airing the game. Pity that it’s being played in a half-empty stadium.

Ironically enough, this crowd would be about the capacity of Temple’s new football stadium, if it existed, on its campus. Instead, the Owls are still playing home games in front of about 40,000 empty seats at Lincoln Financial Field. It’s a bad look, in person and on TV.

This game, and the attention surrounding it, should have been a great opportunity to showcase our North Broad Street campus. After all, Temple is no longer just a commuter school serving the region — it’s a nationally recognized university. But we’re here in South Philly, hearing our own echoes.

Temple doesn’t have its own football stadium because there have been enough loud, opposition voices in the neighborhood to convince City Council president Darrell Clarke to do absolutely nothing to support the project, or even to attempt to mediate neighbors’ concerns.

“To this day we haven’t seen a single person willing to publicly stand up and support it,” he said last year.

Of course, Clarke himself could support it. He could see the potential for job creation, for enhancing the school’s reputation as a beacon for young people who want to position themselves to live and work in Philadelphia after graduation.

Legitimizing Temple football with a home would be a valuable recruiting tool, and not just for athletes. Prospective students are attracted to the spirit and sense of community that events like football games bring to a campus. According to the proposal for the $130 million facility, there would also be meeting and research space, along with a retail complex, in the area of the new stadium.

The stadium would be funded by donations, loans, and grants. It would not affect tuition, and in fact would save Temple the $2 million per year it pays to rent Lincoln Financial Field. That money could be used for research and education.

The proposal calls for two main entrances: one at Broad Street and Polett Walk, and the other at Broad and Norris streets. On two sides, the stadium would be built 25 feet below sidewalk level, respecting the surrounding rowhomes.

The university seems to have all the right answers to neighbors’ questions about noise, traffic, lights, and trash. Residents are also concerned that rents and home prices will continue to rise, forcing low-income folks out of the neighborhood, but the campus is booming and investments are being made in the neighborhood regardless of the stadium. And, let’s not forget the commerce the stadium would generate in the immediate area.

How any of this is bad for the surrounding neighborhood is a mystery to me.

Still, after several years of planning, feasibility and traffic studies, town hall meetings, and protests, and despite Temple’s pledge to make a significant investment in other community projects, the stadium remains stalled, which is exactly where many neighbors, and even some members of the Temple community, want to keep it.

“People don’t go to Temple to watch football games,” Temple English professor Eli Goldblatt told Philly Mag in 2018. “You’re not going to build a football program at Temple. This is a misunderstanding about who we are, about ourselves!”

This sort of sentiment is misguided. Temple has, indeed, built a football program, and a successful one at that. The days of getting demolished by Miami and Penn State at the Vet are gone. If ever there was a time in Temple’s history to move forward with a new facility, this is it.

I know this because on this unusually warm, September afternoon, Temple beats Maryland — Big 10 team — in a victory worthy of celebration, and one that further legitimizes the Owls’ football program.

If only such a triumph hadn’t taken place on a rented field, in front of 40,000 empty seats.

James D. Schultz is the chair of the Government and Regulatory practice at Philadelphia law firm Cozen O’Connor. He served as the general counsel to Pennsylvania Gov. Tom Corbett from 2011 to 2014 and was senior associate counsel to the president in the Office of White House Counsel during the Trump administration. The views and opinions expressed in this op-ed are those of the author and do not reflect the policy or position of Cozen O’Connor.