The most serious allegations in the lawsuit against the Philadelphia Police Department that led to the downfall of commissioner Richard Ross, who himself only makes a brief appearance in the suit. 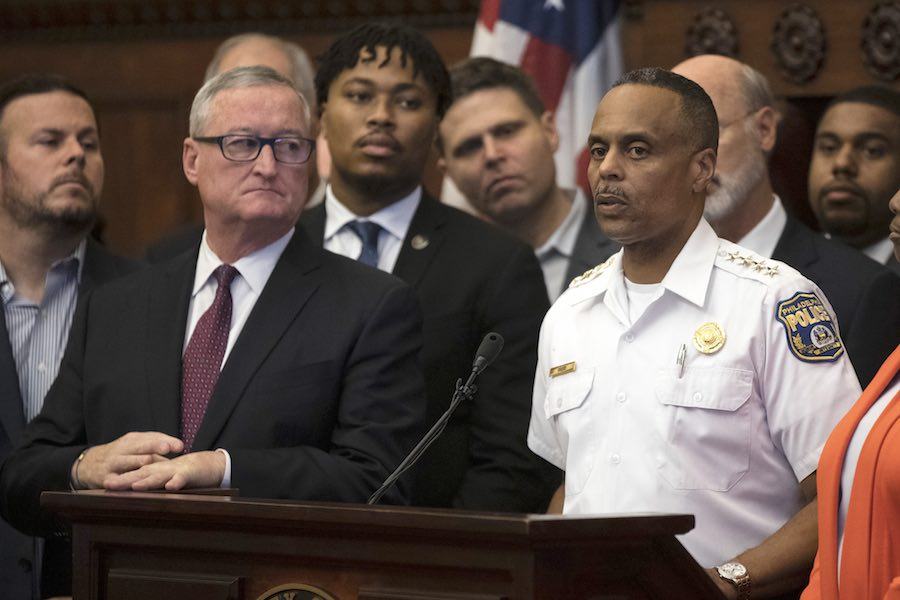 Virtually no one saw it coming. Philadelphia Police Commissioner Richard Ross shocked the city on Tuesday when he announced his resignation amid a sexual harassment scandal that was just beginning to unfurl thanks to a new court document in a federal lawsuit filed by two female Philly cops.

Here’s what we know about the lawsuit, which names the city, Ross, and ten other police officials as defendants.

The Plaintiffs in the Philly Police Lawsuit

Throughout her 15-year career with the Philadelphia Police Department, McCowan has worked at the 23rd Police District, the Police Board of Inquiry, the Philadelphia Police Academy, Internal Affairs, and, most recently, the Real Time Crime Center at the Delaware Valley Intelligence Center, a special agency that deals with things like terrorism threats in the region.

Allen, 38, is a black Hispanic mother of three, who is also married to a Philly cop, Edward Allen.

According to court documents, both McCowan and Allen have received temporary reassignments while the suit progresses: McCowan is working police radio and Allen has been assigned to the Neighborhood Services Unit.

The Defendants in the Philly Police Lawsuit

Those who stand accused in the lawsuit are as follows:

• Interim commissioner Christine Coulter, who just received that appointment in light of the Ross’s abrupt resignation. Prior to that, she was a deputy commissioner.

• The City of Philadelphia, which is routinely named as a defendant in lawsuits against the Philadelphia Police Department.

It’s worth noting at this point that none of the defendants in the lawsuit has commented on any of its specific allegations, as is standard operating procedure in any suit against city departments. They have yet to file a formal answer to the complaint in court.

The Gist of the Philly Police Lawsuit

At its crux, the lawsuit alleges that, federally speaking, McCowan and Allen have been the victims of sexual harassment, sexual discrimination, racial discrimination, and retaliation. Allen also claims that there were violations of the rights granted to her by the federal Fair Labor Standards Act.

There are also nonfederal claims, including assault and battery, intentional infliction of emotional distress, and violations of whistleblower laws, all of which fall under Pennsylvania statutes.

The lawsuit claims that “these experienced and hard-working public servants have suffered continuous and ongoing sexual harassment and discrimination by both coworkers and supervisors.”

The Specific Allegations in the Philly Police Lawsuit

The federal lawsuit filed by McCowan and Allen against the Philadelphia Police Department is a whopper of a lawsuit. The complaint is more than 100 pages long — in terms of lawsuits of this kind, this is definitely a long one — and there are numerous highly specific allegations put forth in the suit by McCowan and Allen.

If you’re a big fan of digesting legalese, we’ve provided a complete copy of the complaint in the Philly police lawsuit here. If you’re not, we’ve pulled out some key allegations.

McCowan claims that she had a two-year affair with Ross. This is pretty much the bombshell allegation that led to Ross’s resignation, but it appears in the complaint almost as an aside. In the suit, McCowan says that she called Ross in February 2019 to complain to him about the way that Curtis Younger had been treating her (more on that below) and that Ross essentially dismissed her allegations. The suit claims that he did that “in retribution for her breaking off their two-year affair, which lasted from 2009 to 2011.”

Allen and McCowan both claim that Younger sexually harassed them, with most of the instances cited in the lawsuit dating from January 2019 and later.

Allen alleges that Younger once picked her up by the waist, saying, “You’re so small!” She also accuses him of looking at her breasts while saying, “It looks like you need to go pump because they are looking big.” He’s also accused of telling her, “You lost your ass after having the baby” and “If you gained 15 more pounds, you would be on point.”

McCowan says that Younger called her “babe” and made repeated comments about her wedding photos on her desk. “Are you pregnant in that picture?” he allegedly asked of one of the wedding photos. Then he allegedly remarked, “You have pictures of this motherfucker all over your desk. My wife doesn’t have pictures like this on her desk … Oh, I forgot, y’all are still wet. It’s still new.” McCowan also claims that Younger grabbed her hand and tried to forcibly remove her wedding band.

According to the suit, Allen had a lot of issues surrounding her right to express breast milk after she came back from maternity leave late in 2018.

In January 2019, she says, some of the breast milk she had expressed was stolen from a bag inside a refrigerator at work. She reported the incident and says that for “the next several weeks, whenever Sergeant Williford saw Ms. Allen carrying her milk bag from the locker room to her refrigerator he laughed and joked about her milk being stolen and made comments about ‘wanting chocolate milk ….’”

The suit goes on to say that her supervisors made it difficult for her to express breast milk on the schedule that she needed to and that they did not provide an appropriate location for her to do so.

The Rest of the Allegations

In addition to the sexual harassment accusations against Younger, there are allegations of unwanted groping and other inappropriate touching against other members of the Philadelphia Police Department, who are not named as defendants in the lawsuit.

As for the remainder of the defendants, they appear in the suit because Allen and McCowen claim that when they tried and tried again to report and escalate their concerns, these reports fell on deaf ears. Allen and McCowen say that their higher-ups failed to act and, in some cases, retaliated against them.