Flash Flooding and Severe Storms Could Dampen Your Evening Commute

Tuesday afternoon will likely bring heavy rains to the area — which means you could be in for a messy ride home yet again. (Thank global warming.) 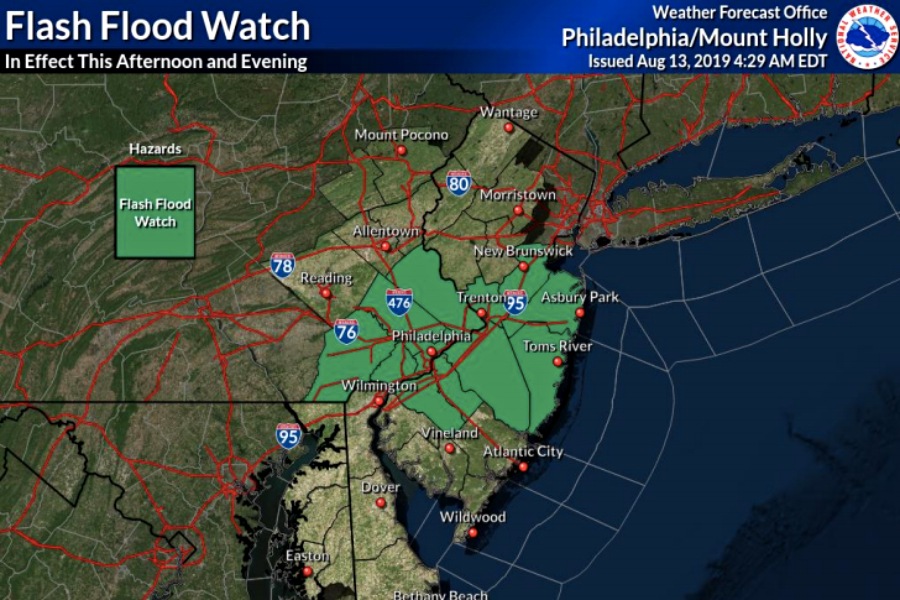 Roughy a week after storms and downpours left some evening commuters stranded last Wednesday, more flash flooding is headed to our area on Tuesday — and it could complicate your trip home yet again.

Forecasters with the National Weather Service say the afternoon will likely bring to the area heavy rains and the potential for severe storms. We could see a few showers and a thunderstorm or two on Tuesday morning; both are more likely to occur and intensify after noon.

Storms could produce gusty winds and flooding. The heaviest rainfall could fall from northern Delmarva east across southern New Jersey, where isolated intense storms, damaging winds, large hail, and tornadoes are possible. If the area continues to destabilize further throughout the afternoon, the threat for severe thunderstorms will expand into the Philly area this afternoon and last into at least the early evening.

Storms will be capable of producing damaging wind gusts and heavy rainfall that may lead to flash flooding. Large hail and isolated tornadoes cannot be ruled out. Refer to our latest briefing package for details: https://t.co/JiD09BPJVv

All of this means your evening commute could be messy yet again, of course. Last week, storms and flash flooding downed trees and overhead wires in the area, stranding some vehicles and thousands of SEPTA riders. A quarter of SEPTA’s trains were delayed last Wednesday, and the Norristown High Speed Line and some trolley tracks were flooded, according to PlanPhilly.

How does SEPTA plan to adapt to climate change? With a few developments, including upgrading signals and placing them on stilts, relying less on commercial power generation, and improving customer service (including communication and rescue buses) ahead of weather events, per PlanPhilly. Still, flooding and things like downed trees — which halted a Regional Rail line for hours this past Saturday — promise to cause some headaches in the future.

Tuesday could bring another test to SEPTA’s preparedness. We’ll see how transit agency fares compared to last week. In the meantime, you might want to prepare for the heavy rain coming our way as best you can.