Two of the companies named in the product liability suit have alleged ties to Pennsylvania — but it doesn’t hurt that Philadelphia juries have a reputation for doling out huge damages. 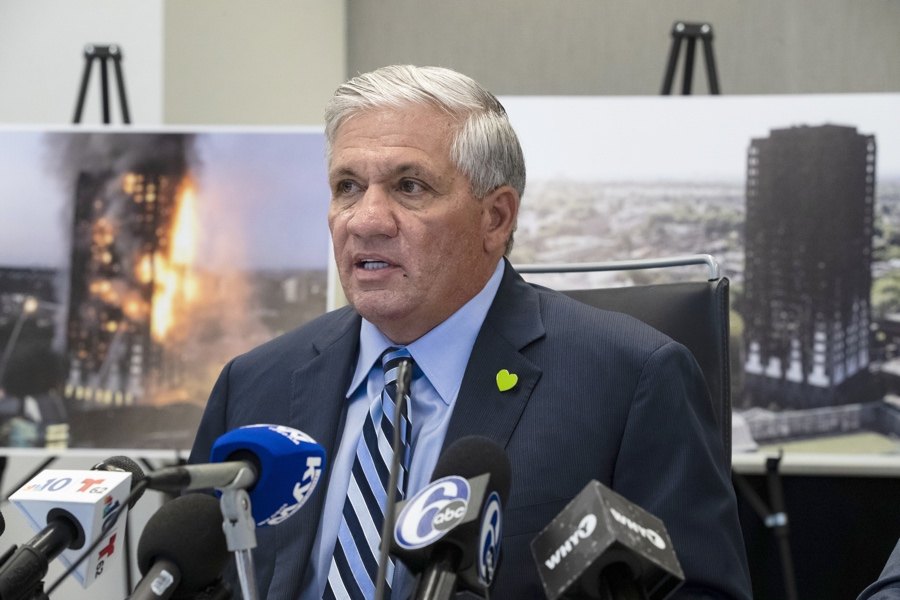 Robert Mongeluzzi, representing the estates of those who died in the 2017 Grenfell Tower fire in London, has filed suit in Philadelphia court. Photo by Matt Rourke/AP.

On June 14, 2017, the Grenfell Tower apartment complex caught fire in London. The fire, which quickly consumed the 24-story building and killed 72 people, occurred a world away from Philadelphia — 3,542 miles, to be precise. And yet, despite the fact that the victims were British, and despite the fact that the blaze took place a continent away, a civil lawsuit alleging negligence was filed in Philadelphia Common Pleas court earlier this year.

There is, however, according to the lawsuit, a connection between the British plaintiffs and Pennsylvania. Arconic, a company that has its headquarters in Pittsburgh, allegedly produced the tower’s cladding through a European subsidiary. A second company, Saint-Gobain, with its U.S. headquarters in Malvern, allegedly produced the tower’s insulation through a British subsidiary called Celotex. According to investigators, both the insulation and cladding were flammable and may have helped propel the fire upward like a bellows. (Arconic and Saint-Gobain both say their U.S. corporations are entirely separate from the European ones that made the cladding and insulation.) Robert Mongeluzzi, the Philly attorney filing the suit, is betting that link is enough to justify his transcontinental legal shipment.

There might also be a less obvious reason why Mongeluzzi chose Philly Common Pleas, of all places, for his initial filing: The court has long been thought of as a place where the scales of justice are weighted in favor of the plaintiffs. In part, that’s because the court accepts a huge number of cases: at the most recent count in 2017, there were 39,00 pending cases before the court — many of which are pharmaceutical suits not even filed by plaintiffs from Pennsylvania. And unlike courts in the U.K., Philly juries have also been known to award huge damages, like the $44 million verdict in a 2016 medical malpractice case against Penn.

To some observers, these are hardly positive traits. The American Tort Reform Association, a civil litigation reform group, has dubbed Philly Common Pleas Court a “judicial hell hole.” To ATRA, as the group is known, the court’s wide-open doors — and the potential cornucopia that lies just within them — are signs of a judicial system that has lost all sign of calibration.

But angling to get one’s case in front of a generous jury is widespread. The practice even has its own name: “forum shopping.” And while Mongeluzzi rejects the notion of Philadelphia as a hell hole, he doesn’t exactly dispute a bit of forum shopping, either: “I certainly try to file a case in location that is most favorable to my client, just like defendants try to move to jurisdictions that are most favorable to their clients,” he says. “That is what we are obligated to do as attorneys.”

These are the rules of the game, in other words, and you’d be stupid not to play by them.

In Philly, Jury Verdicts Are Rare, But Lucrative

For all the talk of generous jury verdicts, it’s quite uncommon for a case to reach that terminal stage in the legal process. In 2017, Philadelphia Common Pleas Court held only 293 jury trials, even as some 48,000 total cases were filed. Both plaintiff’s and defense lawyers know that juries can be fickle, so there’s often considerable incentive for both sides to settle a case before engaging the game of roulette that is a trial.

But of those cases that do end up in front of a Philly jury, more tend to be decided in favor of the plaintiffs than elsewhere. In the past five years, state court juries in Philadelphia have ruled in favor of plaintiffs in medical malpractice cases 37 percent of the time, compared to just 20 percent across the rest of the state in similar cases.

Is that enough to constitute a hell hole? Philly lawyers — defense and plaintiff’s attorneys alike — tend to defend their community. “It’s not like Philly juries are less objective than others,” says plaintiff’s attorney Jim Beasley. “That’s insulting to Philadelphia jurors.” And yet, no one really disputes the reputation that Philly juries are plaintiff-friendly, either. “City juries are more sympathetic than suburban juries,” says Jim Heller, a local defense attorney.

Many Philly Common Pleas Cases Aren’t Even Filed by Pennsylvanians

ATRA, the tort reform advocacy group, argues that juries are just one among a litany of factors that make Philly Common Pleas court a hell hole. Perhaps even more hell-hole-inducing, ATRA argues, is the fact that Philly Common Pleas judges often agree to hear cases from plaintiffs with no in-state connection to Pennsylvania, let alone Philly. “State courts exist to serve interest of people within that state,” says ATRA president Tiger Joyce. “They’re not there to be the courtroom of first resort of individuals from other jurisdictions.”

The flooding of Philly Common Pleas court with out-of-staters is especially common with so-called mass torts — a group of similar cases that has many plaintiffs but a few defendants. Pennsylvania had the highest percentage of mass torts in a 2015 survey of 28 state court systems. In Philly, most of these cases are related to pharmaceuticals: In 2017, more than 5,400 mass tort cases were filed in Common Pleas Court, most of which came from a single set of lawsuits pertaining to the schizophrenia drug Risperdal. Eighty-six percent of Philly’s new pharmaceutical civil suits are brought by out-of-state plaintiffs.

But the lawyers in Philly says there’s a perfectly reasonable explanation for this: Philly Common Pleas is simply more efficient, thanks to a special division, the Complex Litigation Center, that’s explicitly dedicated to mass tort lawsuits. “It’s the single most efficient jurisdiction in Pennsylvania,” says Mongeluzzi. The massive number of pharma cases may also have something to do with the fact that many of the companies producing these drugs — like Janssen Pharmaceuticals, a Johnson & Johnson subsidiary — are based either in or near Philadelphia.

Tiger Joyce remains unconvinced: “There’s no holy writ that states Court of Common Pleas in Philadelphia should become the center of the universe for pharmaceutical litigation.”

Stephen Burbank, a professor at Penn’s law school, says hell hole labels are nothing but “compilations of anecdotes,” and that discrepancies between jury verdicts don’t hold up to empirical scrutiny. But that hardly even matters. Because even if juries in Philadelphia don’t give outsized verdicts, plaintiff’s attorneys clearly think they do, which means they fight to bring cases to Philly, which then leaves Philly with a weighted selection of the most severe cases in the state — and then, when a jury happens to award damages in one of those cases, people see it as a sign of generous Philly juries and you’re left with a self-perpetuating feedback loop.

“Forum Shopping” Is Baked Into the Current System. But That’s Changing.

Left to their own devices, lawyers will likely continue to shop for juries they perceive to be favorable. But a series of legislative and court decisions is slowly limiting that freedom. Pennsylvania already enacted one significant constraint in 2002, mandating that all medical malpractice cases must be brought to a court in the same county where the alleged malpractice occurred. That put a quick end to forum shopping: lawyers used to file an average of 1,204 medical malpractice cases in Philly from 2000 to 2002; now, the yearly figure hasn’t topped 450 at any point this decade.

The U.S. Supreme Court is erecting new barriers, too. A series of recent decisions has maintained that plaintiffs can only sue in an out-of-state court if that state is where the defendant primarily does its business. That could have negative implications for Mongeluzzi’s Grenfell Tower case, considering Arconic maintains it was not the Pennsylvania business that manufactured the building’s cladding, but rather its separate European subsidiary. Saint-Gobain, the other multinational company named in the suit, says that it is completely separate from Celotex, the producer of Grenfell’s insulation — even though the company’s website clearly lists Celotex as one of its brands. A Saint-Gobain spokesperson wrote in a statement, “Saint-Gobain Corporation is a U.S. holding company, with no direct or indirect ownership interest or control over Celotex Limited, a U.K. business.”

Then there is the question of geography. With virtually all of the physical evidence located in Britain, some legal experts feel the case doesn’t belong in the U.S. “It would shock me if that stayed in Philadelphia,” says Jim Heller, the local defense attorney.

Defense attorneys for Arconic and Saint-Gobain made the same point in a recent filing, arguing, “Future civil litigation in the U.K. will be the appropriate place to resolve questions of liability arising out of the Grenfell Tower fire. This case has no meaningful connection to the U.S., and it should not be litigated here.”

Mongeluzzi, needless to say, disagrees with that assessment. He intends to argue that in today’s global economy, geographic distance is irrelevant. If he can prove the business decisions that led to the sale of the Grenfell cladding and insulation happened in Pennsylvania — a point both companies deny — then he believes the case belongs there. “Why shouldn’t they be held accountable in their own home court?” Mongeluzzi says.

But he’ll be making that argument in front of a different court now. After defense attorneys filed a motion to remove the case to federal court, the case now resides in the Eastern District of Pennsylvania — which is still headquartered in Philly. For the time being, Mongeluzzi appears content to let the case stay there.

In some respects, the distinction between federal or state court is irrelevant. The fundamental question at stake — if the case belongs in the United States legal system at all — remains the same. And in a global economy with ever more diffuse, tenuous multinational corporations, a judge’s decision on the Grenfell case will be a bellwether in determining the limits, or not, to forum shopping.