Free Streets Is a Nice Yearly Gimmick. Now Philly Should Do It For Real

Cities in Europe pedestrianized certain streets decades ago, to considerable success. Philly can too — and help invigorate its retail corridors along the way. 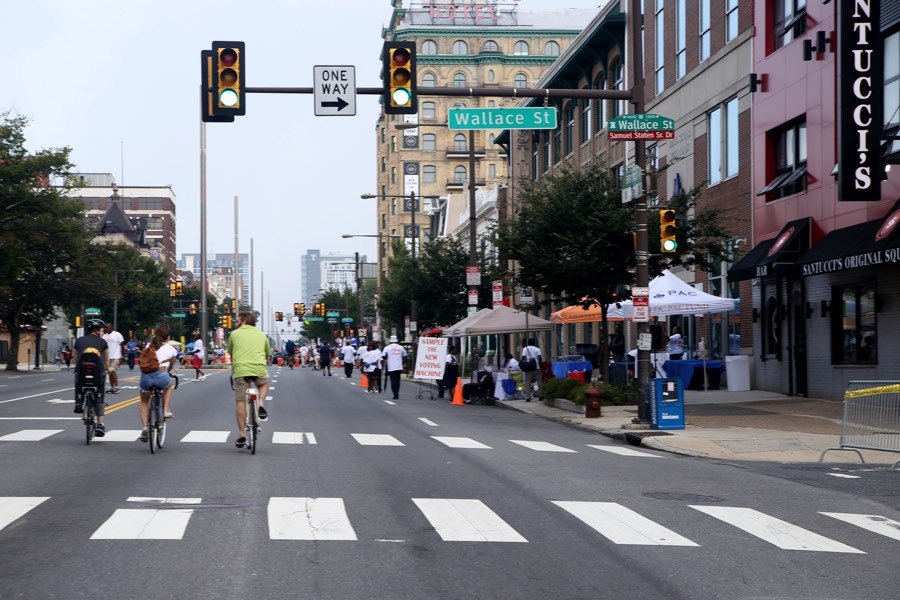 There are 2,575 miles of public roadway in Philadelphia. Usually these streets belong to cars, but once a year, thanks to the Philly Free Streets program, the city does its best impression of Europe and opens up a stretch of road — most recently four miles of North Broad Street — exclusively for pedestrians and cyclists. And then the next day, the street goes back to the way it was before: filled with cars, buses, and your occasional dose of road rage.

That’s fair enough. The asphalt superhighway that is North Broad is best suited for car travel. But if there is one city in the United States that could actually adopt the sort of pedestrianized infrastructure so common in Europe, it’s Philly. And Philly Free Streets, nice idea though it may be, obscures this fact by taking place on a wide street with diffuse retail — that is, a space entirely ill-suited for permanent pedestrianization. Don’t let that muddle your perspective: Pedestrianization is a viable policy in this city, for reasons both aesthetic and economic.

The aesthetic point is an easy one: Take a look at this before-and-after photo of a block of Seville, Spain, which recently underwent pedestrianization. Which looks more inviting? 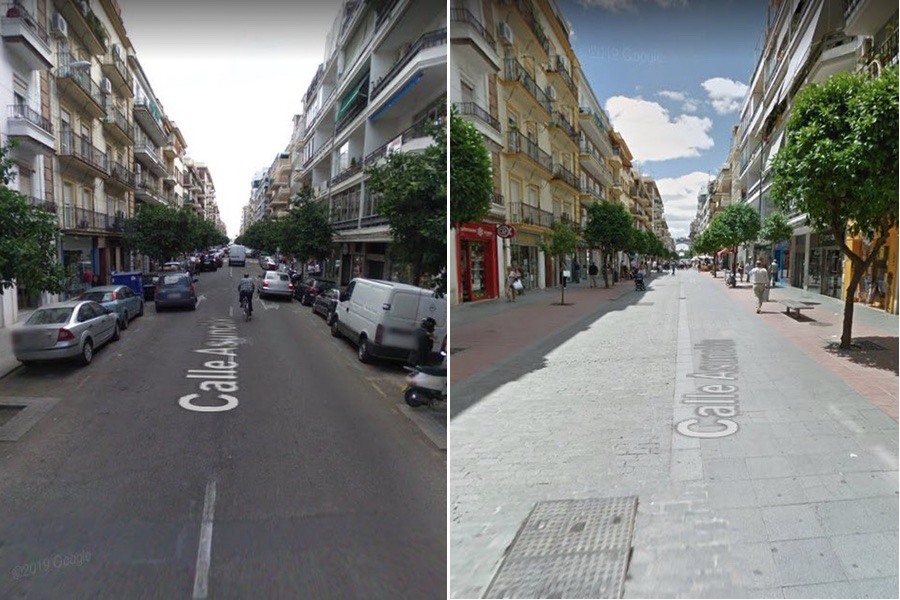 Unless you’re an asphalt contractor, I rest my case.

Now, on to what people really care about: the money.

Europe, despite its present reputation, wasn’t always the land of pedestrian boulevards. That only came about in the late 1960s and early 1970s, when many cities changed their urban layout to favor foot traffic rather than vehicles. The transition provides a useful, if dated, case study. One analysis of 11 different cities in Germany found that in the aftermath of pedestrianization, 83 percent of businesses reported an increase in revenue, compared to just 20 percent of those outside the walker-friendly area. The shops in the pedestrian street also reported higher rates of profitability than other stores — even when accounting for higher rents inside the newly desirable pedestrian space.

The European towns that underwent pedestrianization more than 40 years ago of course did so in an economic climate vastly different from the one in which businesses operate today. But even online retail doesn’t seem to have blunted the economic boon of pedestrianization: A 2011 study of a pedestrianized street found that in Hong Kong, too, commercial rents increased 17 percent in the aftermath of the new policy. That would seem to suggest that if businesses can afford higher rents, they must be making more money.

But we don’t even need to look internationally for role models. In 2009, New York City unveiled a new vision for Times Square — one that pushed cars off Broadway and created a full pedestrian plaza in its place. (If people can pedestrianize land in one of the densest stretches of commercialism on planet earth, there’s no reason we couldn’t do the same in Philly.) Retail rents tripled in the decade after the plaza’s construction, and the area experienced a 30 percent increase in foot traffic — which makes sense, considering the plaza nearly doubled the amount of available space to pedestrians.

Philadelphia, it must be said, has previously sought to modify its traffic in the name of boosting retail — most notably with the Chestnut Street Transitway of the 1970s, which imagined it might clear congestion off the street by transforming it into a bus-only thoroughfare. That policy was a failure. But as Inquirer architecture critic Inga Saffron recently argued, the Transitway’s cause of death may have had as much to do with the sagging economic vitality of Philly in the 1970s and 1980s than it did the layout of the street.

In any case, Chestnut Street probably isn’t the ideal location for a newly pedestrianized street. There is, however, one obvious candidate: the Italian Market.

Think about it: Ninth Street has the two essential traits a pedestrian corridor needs — narrow streets and concentrated retail. And with its outdoor stalls, produce vendors, and trash barrel fires, the Italian Market already has a retro air about it. Why not steer all the way into the vibe and ditch cars?

There could be other candidates for pedestrianization, too: maybe a stretch of East Passyunk Avenue, or 18th Street near Rittenhouse. Second Street in Northern Liberties, or 13th Street in Midtown Village seem like viable options, too.

Car people will rage that traffic is already bad enough in the city and that pedestrianization would only exacerbate matters. But there’s no divine ordinance that states cities must be set up primarily for cars. And in any case, there are gradients to pedestrianization. Not every street has to be converted into a full-time walker’s paradise. We could install pop-up bollards that block off streets at appointed times of the day, as they do in other cities. Think of it like a custody agreement: motor vehicles could have weekday mornings and rush hour; pedestrians could have weekend afternoons.

If the turnout at Philly Free Streets is any indication, there’s appetite for this sort of policy. And remember: Philadelphia still has a total of 2,575 miles of street. If the city were to create two or three pedestrianized areas and that were to drop to 2,573, I suspect everyone would survive just fine.