Another project is currently underway along 11th Street in South Philly – and here’s why it looks especially promising for cyclists and street safety. 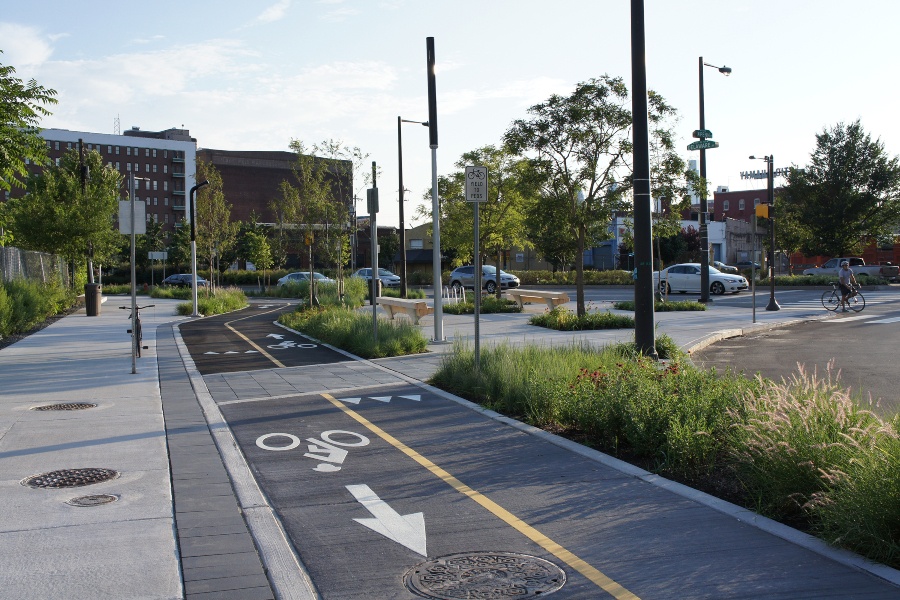 Philly’s getting another two-way protected bike lane, and this time it’ll be located a little closer to the heart of the city.

The project will run along 11th Street between Bainbridge and Reed streets, helping to move cyclists through the bustling South Street area (near Magic Gardens) to the heart of the Passyunk Avenue restaurant corridor, just west of Philly’s cheesesteak Vegas. In other words, the bike lane is coming to a high-profile area frequented by residents and tourists alike.

The project is part of an effort by the Office of Transportation, Infrastructure and Sustainability to revamp road safety measures during the city’s 2019 paving schedule. Part of those plans include the highly traversed Spruce and Pine street bike lanes, which are currently being swapped from the right to the left sides of the roads. (Construction for that project began this week.)

The 11th Street two-way bike lane will be the third of its kind in the city — but it seems especially promising for cyclists because of its high-density location. Existing two-way protected lanes include the Ryan Avenue bike lane way out in Northeast Philly and the Penn Street Trail lane in Northern Liberties. (Lanes on Parkside Avenue and American Street are currently under construction.) The latter is situated a bit closer to Center City, between Spring Garden and Ellen streets, but its trail isn’t quite as foot-traffic-heavy as the forthcoming South Philly project’s.

After all, placing two-way protected bike lanes — which urbanists in more bike-friendly cities sometimes dub “cycle superhighways,” depending on their size and scale — in high-profile locations could help to increase the visibility of cycling infrastructure in Philly, as well as the conversation surrounding such projects. By expanding the presence of these bike lanes in popular areas, street safety could become more of a norm in Philly — and with one of the highest rates of traffic fatalities among the nation’s largest cities, Philly certainly stands to benefit from more street safety. In fact, the stretch of 11th Street where the two-way bike lane will be implemented saw 31 crashes between 2013 and 2017, according to OTIS. Ninety percent of those incidents resulted in injuries.

The city expects to complete the 11th Street project by winter. Workers will pave over the road’s unused trolley tracks — which can pose a serious threat to people on bikes — between South and Reed streets. They’ll also add bulb-out pedestrian areas at intersections to reduce long pedestrian crossing distances, as well as prevent illegal parking at street corners.

Kelley Yemen, director of the city’s Complete Streets program, said the city settled on a two-way protected bike lane rather than two separate one-way lanes on 11th Street because the configuration allows the road to retain its diagonal parking spaces — which, she said, “we wanted to keep as much of as possible.”

“With two-way or one-way [bike lanes], it really depends on the goal of what we’re trying to fit in the roadway,” Yemen said. “There’s some advantage sometimes to keeping them one-way on each side of the street. We want to make sure we’re having a network connection that serves the city with the highest quality that fits the streets. For 11th Street, it made sense.”

OTIS will hold a pop-up meeting to discuss the 11th Street project construction with residents and community members between 5 p.m. and 7 p.m. on Tuesday, July 16th, at the corner of 11th and Fitzwater streets. You can find more information on the project right here.