On the 100th anniversary of Pennsylvania’s ratification of the 19th Amendment, it’s time you read up on the Justice Bell. It looks almost identical to the Liberty Bell — except it’s not cracked. 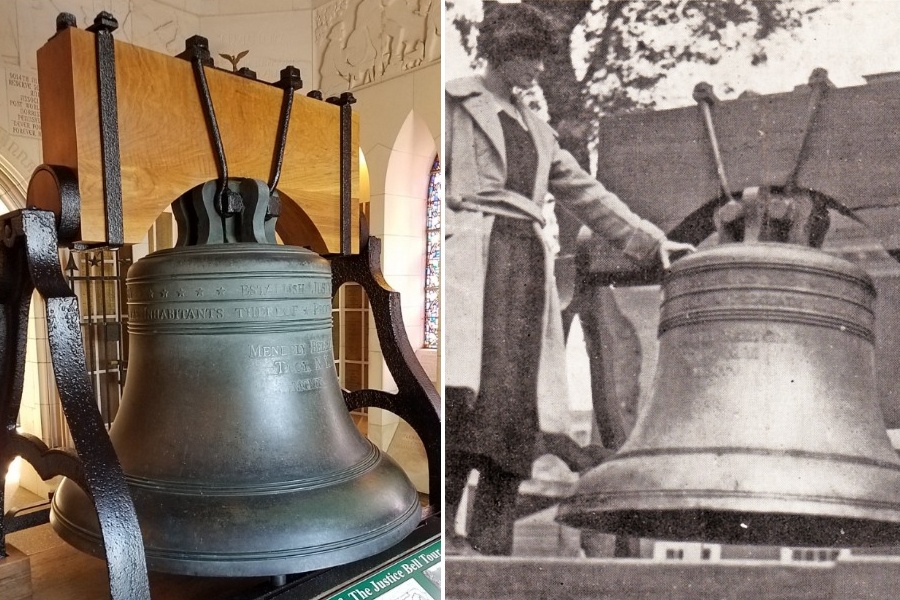 Monday marks the 100th anniversary of women’s suffrage in Pennsylvania — the day when the state voted to ratify the newly passed 19th Amendment. Women today are encouraged to celebrate by wearing white (or purple or gold), harking back to those who, a century ago, lauded the occasion by ringing a replica of the Liberty Bell they’d come to claim as their own.

First, some background: Pennsylvania signed the 19th Amendment on June 24th, 1919. But it wouldn’t become law until August 1920, when at least 35 other states threw their support behind women’s right to vote, ratifying the legislation. The victory was a long time coming for women everywhere — and especially in Pennsylvania.

Here, women had embarked on a symbolic equal rights campaign unlike any other, involving a monument close to the hearts of Philadelphians: the Liberty Bell. Only the bell of suffragettes, a close replica of its cousin at Independence Mall, wasn’t cracked.

The Justice Bell (also referred to as the Women’s Liberty Bell or the Suffrage Bell), was commissioned by Chester County-raised suffragist Katherine Wentworth Ruschenberger in 1915. Maybe you’ve seen it before — it’s on display in Valley Forge, in the Washington Memorial Chapel, located at 2000 Valley Forge Park Road.

The Justice Bell was made at the Meneeley Bell Foundry in Troy, New York. (The Liberty Bell was cast in London.) It reads:

ESTABLISH JUSTICE
PROCLAIM LIBERTY THROUGHOUT ALL THE LAND UNTO ALL THE INHABITANTS THEREOF
MENEELEY BELL CO
TROY, NY
MCMXV

The year the bell was made, suffragettes like Rushenberer and Pittsburgh’s Jennie Bradley Roessing mounted it on the bed of a pickup truck (also purchased by Ruschenberer) and embarked on a four-month, 5,000-mile road trip to all of Pennsylvania’s 67 counties. Their purpose was to campaign for a statewide referendum on suffrage, which, at the time, they saw as the most viable path to women’s suffrage. Throughout the journey, the bell’s clapper was chained, preventing it from ringing out and symbolizing how voiceless women felt without the right to vote. 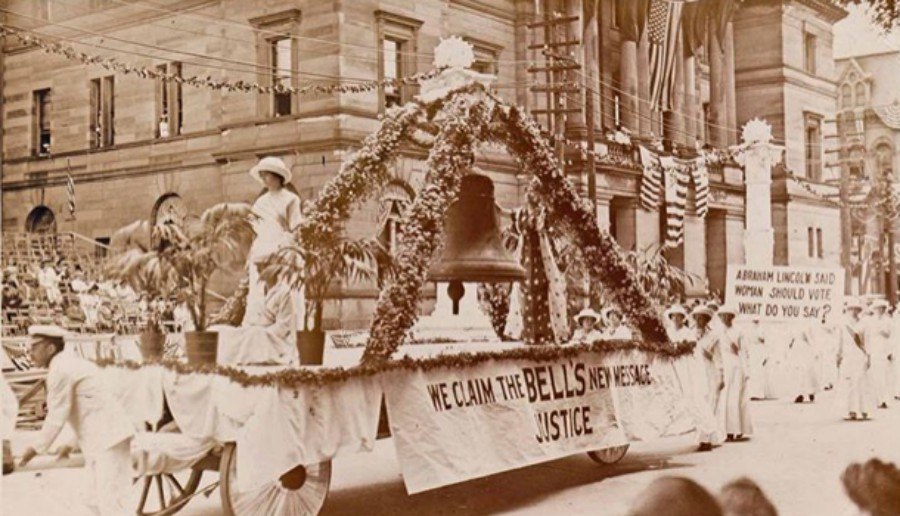 Photo courtesy of the collection of Dr. Kenneth Florey

The referendum was defeated that year, but women across the country continued to fight for the right to vote, including, notably, Alice Paul, a descendent of William Penn who attended Swarthmore College and earned her PhD from the University of Pennsylvania. Paul, who was imprisoned multiple times during her fight for suffrage, is credited with organizing several important marches for suffrage, including a high-profile demonstration in Rittenhouse Square in 1914.

It’s important to note that historical accounts reveal that Paul quietly discouraged black women from marching alongside white women at her events. In general, black women often faced another layer of struggle — racial exclusion — in the fight for suffrage. Many times, they were neglected from or purposefully left out of white women’s efforts. (It’s also worth noting that after the 19th Amendment passed, many black women continued to be barred from voting, whether they were defrauded by voting registrars or were simply driven away from registration offices. It wasn’t until the Voting Rights Act of 1965 that many black women felt they truly had access to the polls, and even now, many argue the nation still has a lot more progress to make.)

One of many black women fighting for equality in Pennsylvania around the time of women’s suffrage was Daisy Lampkin, who is best known for becoming the first women to be elected to the national board of the NAACP. Lampkin was born in Reading but spent the majority of her career as an activist in Pittsburgh. 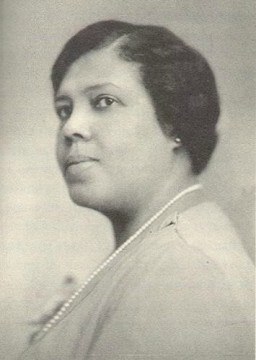 There, she served as a motivational speaker for women, as well as an active member of the Lucy Stone Women’s Suffrage League, the National Suffrage League and the National Association for Colored Women (of which she was later named national organizer and chair of the executive board). In 1929, after the suffrage battle was won, Lampkin was elected vice-president of the Courier Publishing Company, which owned the Pittsburgh Courier.

Here in Philadelphia, black suffragists like Harriet Forten Purvis and Margaretta Forten (daughters of the wealthy Philadelphia abolitionists James and Charlotte Forten and founding members of the Philadelphia Female Anti-Slavery Society) helped bring the Fifth National Woman’s Rights Convention to the city in 1854, pushing forward the conversation that would inspire Lampkin and eventually secure women everywhere the right to vote.

Because of those women — and Rushenberer, Roessing and Paul, as well Philadelphia Quaker Lucretia Coffin Mott, of course, and more — a second Justice Bell road campaign took place in 1920, this time around the country. The difference? Congress had just passed the 19th Amendment, and now the women were working to rally the required 36 states behind ratification of the amendment.

The Justice Bell would finally ring for the first time on September 25th, after Tennessee declared support for the amendment, making it law. Women at last rung the bell, then located at Independence Square, 48 times — once for each state in the union at the time — and that fall, 44 years after women like Susan B. Anthony fought boldly for suffrage at the U.S. Centennial Exhibition in Philadelphia, Pennsylvania women saw their first opportunity to vote.

The Justice Bell sounded again this Monday afternoon: The First Lady of Pennsylvania, Frances Wolf, joined Alexandra “Sandy” Tatnall, a descendant of Ruschenberger, in ringing the bell at Valley Forge. Plus, the state’s original document ratifying the 19th Amendment to the U.S. Constitution will be on display in the Capital Rotunda in Harrisburg on Monday.

“One hundred years ago, our suffragettes wore white to show their support for granting women the right to vote,” Wolf said. “As Pennsylvanians we can all be proud of our role in women’s suffrage and we can participate in this celebration by showing our pride and donning the colors of women’s suffrage to honor this day in history, and setting the stage for the national centennial of the 19th amendment in 2020.”