What to Know About “Flesh-Eating” Bacteria in the Delaware Bay

Thanks to climate change, a tissue-destroying infection is becoming more common in the region, according to a new study. Here’s how to stay safe at the Shore. 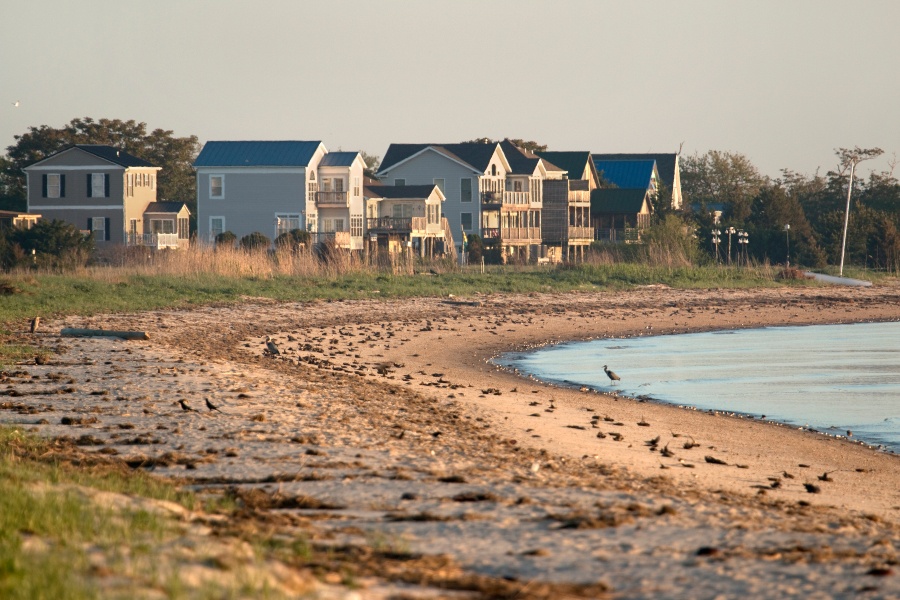 Slaughter Beach on the Delaware Bay. Photo by milehightraveler/Getty Images

You’re going to want to file this one under “all the terrifying ways climate change is affecting our planet.”

A study published on Tuesday warns that medical cases involving a potentially deadly bacterial infection are on the rise in the Delaware Bay area, thanks to warming ocean temperatures. The analysis, published in the Annals of Internal Medicine and co-authored by researchers at the University of the Sciences in Southwest Philadelphia and Cooper University Health Care in Camden, looked specifically at the dangerous Vibrio vulnificus bacterium.

The rare, tissue-destroying bacterium has presented itself in the bay before, but before 2017, doctors at Cooper University Health Care noted just one case involving Vibrio vulnificus at the hospital in the last eight years. Then, in the summers of 2017 and 2018, the hospital treated five related cases, including one that resulted in death.

The bacterium inhabits warm coastal waters, typically off the southeast coast, including in the Gulf of Mexico. Cases of infection have been reported in the Chesapeake Bay area, but until recently they were less common in the cooler, more northern Delaware Bay. The study found that conditions in the bay, which lies between Delaware and New Jersey, are now more favorable for Vibrio growth thanks to climate change. Madeleine King, an assistant professor at the University of the Sciences who co-authored the study, said she expects the bacterium to continue to migrate north as sea temperatures become warmer.

Katherine Doktor of Cooper University Health Care, a senior author of the study, told Medscape Medical News that medical facilities in the vicinity of the Delaware Bay need to be aware of the potential for infection as ocean temperatures rise. Vibrio vulnificus can lead to serious illness and limb amputation, and about one in five infected people die, sometimes within a day or two of becoming ill. The CDC estimates that Vibrio vulnificus affects roughly 205 people per year.

In all of the patients, necrotizing fasciitis, an infection that destroys skin and muscle tissue, progressed rapidly, requiring emergency care. It’s worth noting that all five men suffered from previous medical conditions that researchers believe likely made them more susceptible to Vibrio complications.

One of the men, a 64-year-old with untreated hepatitis C, died following cardiac complications that arose as a result of the disease. A 60-year-old man with Parkinson’s disease developed shock and respiratory failure and required amputation of all four major limbs. The other three men had previously suffered from an untreated hepatitis infections and type 2 diabetes, among other things. Two of the men had also previously experienced leg injuries while crabbing in the Delaware Bay.

Before you swear off the bay: Doktor told Medscape that healthy individuals don’t typically face an increased risk of Vibrio in or around the Delaware Bay. But, she said, people who have weakened immune systems or other complications (like chronic liver diseases) should consider avoiding the bay and/or seafood from the bay — and immediately contact a doctor if they notice any skin changes after contact with water or seafood. Plus, even if you’re completely healthy, you should be extra cautious if you have broken skin — the bacterium can enter through any wound or abrasion.

The researchers said people who comes in contact with brackish water — where seawater meets fresh water — are more often at risk of infection. The bacterium has been reported in saltwater as well, though, and King stressed that “there are many other bacteria that live in open water, which could also pose a risk. So this would be good advice for anyone with a break in the skin.”

King said anyone who is considering crabbing in the Delaware Bay, or in any area where Vibrio vulnificus has been found, should be careful, particularly when handling oysters, crabs, or other shellfish. Of the nation’s 80,000 vibriosis illnesses each year (which includes Vibrio vulnificus), the CDC estimates that 52,000 are caused by eating contaminated food. King also recommended making sure food is properly cleaned and cooked, as well as covering body parts that might be exposed to waters, as abrasions from crabs or oysters could lead to an infection.