I Tried the “New” Center City Sips. You Can Keep It.

Older crowds, snobby vibes, and a dearth of large outdoor venues hosting in the heart of the city made me miss the untamed Wednesday nights gone by. 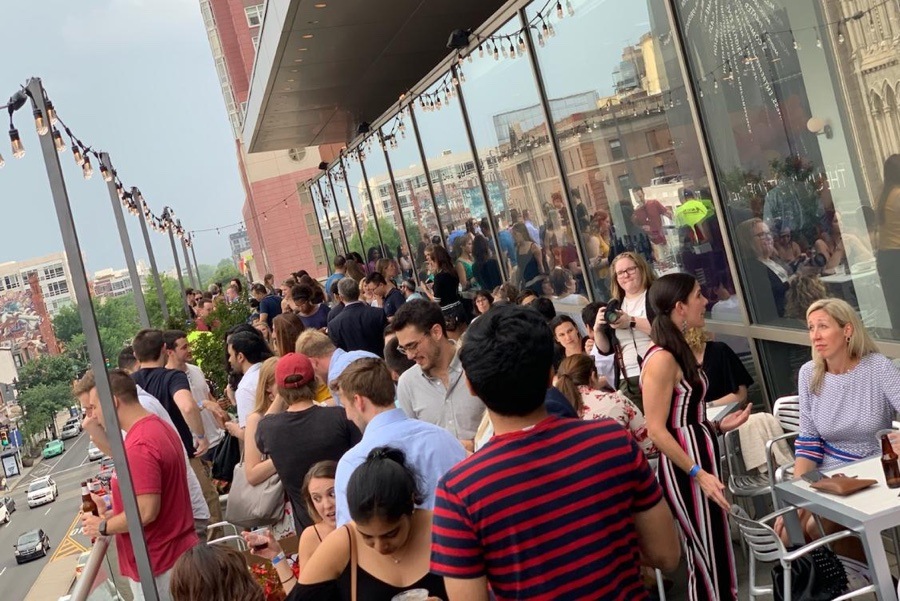 Summertime downtown used to be fun, thanks to the booze-infused phenomenon known as Center City Sips.

Every Wednesday in June, July, and August, I would leave my intern gig a little early to be the first in line to get $5 drinks and rave as DJs spun Top 40 hits. The scene was young, fresh, and flirty, and people from all over the region would let their hair all the way down. Sure, there were some over-the-top moments (like this one guy I ran into from Delco who threw up right next to me), but these were just blips in what was essentially a high-energy, no-frills outdoor party for yuppies.

But after garnering a reputation for getting a little too rowdy and ratchet over the last few years, Center City Sips is shooting for a tamer vibe in its 16th season. Cocktail specials are $6 now, having increased last year, and the refreshed marketing — “Every sip has a story” — practically demands that you take it slow and act like a grownup.

Every once in a while, though, new actually does turn out to be better, so with that in mind I decided to stroll through some of the old popular haunts in the heart of Sips on its first two Wednesdays this year. 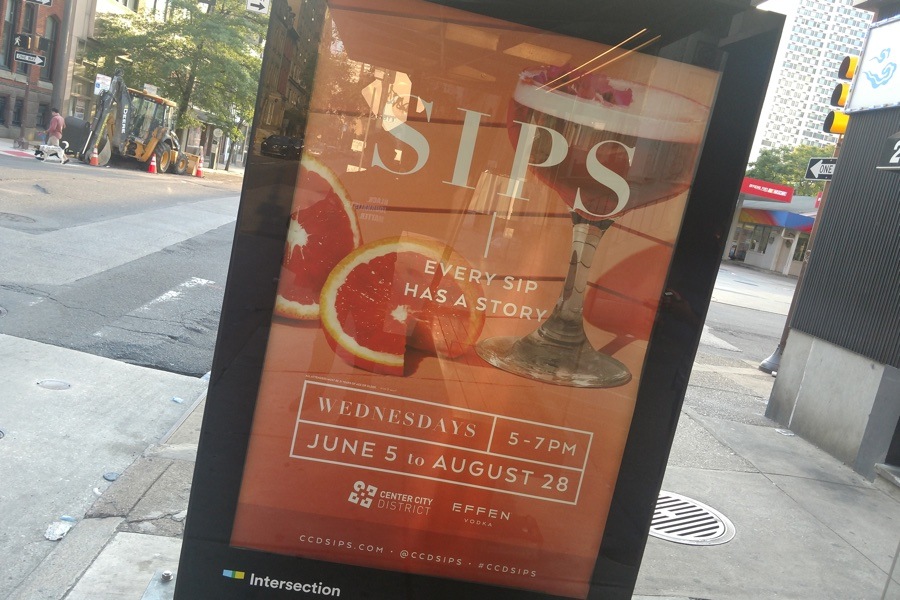 My first stop was at Comcast Center Plaza near 17th and JFK, home of the infamous brawl that many point to as the end of the Center City Sips we all once knew. Anyone who has ever been to Sips knows this was prime real estate for what has defined the experience in recent years. This time around, despite the perfect weather, the once-beloved hotspot was empty — security told me that the venue wasn’t hosting a Sips happy hour anymore. Several other attendees who’d headed there to jumpstart their drink-a-thon weren’t too pleased with the news either.

“This is bullshit,” said Anna, 22, an intern for the city who was “totes annoyed” about the disappearance of Sips at Comcast. “I heard this was the best one. Now I don’t know where I wanna go.”

It was once the ultimate destination for endless cheap thrills, and now it was dead. Chasing more memories, I headed up to 20th and Market, where DuJour Cafe and Bar’s outdoor scene was as vibrant as Comcast’s, and … that’s right, no longer participating in Sips. The traction of these two spots used to make Sips feel like a weekly downtown street festival, setting a tone that reached even more distant Sips venues. What’s the alternative now? 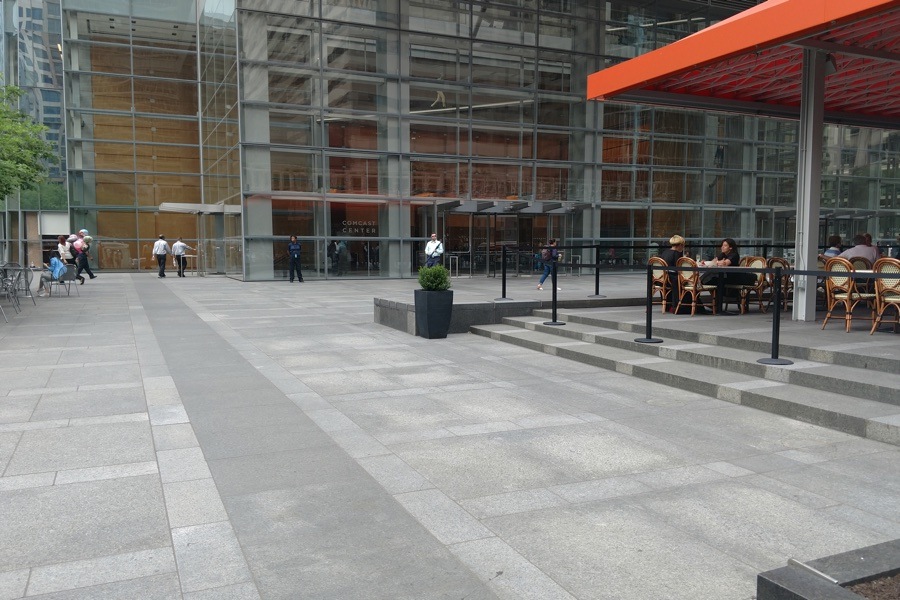 Center City Sips is no longer at the Comcast Center. | Photo by Ernest Owens

Oh, right: the pop-up Uptown Beer Garden. Across the street from the Comcast Center, a roaring old-school ’90s playlist was jamming an R. Kelly classic (I guess someone missed Helen Gym’s memo) as I joined a huge line of heartbroken Comcast Sips veterans waiting to get in. 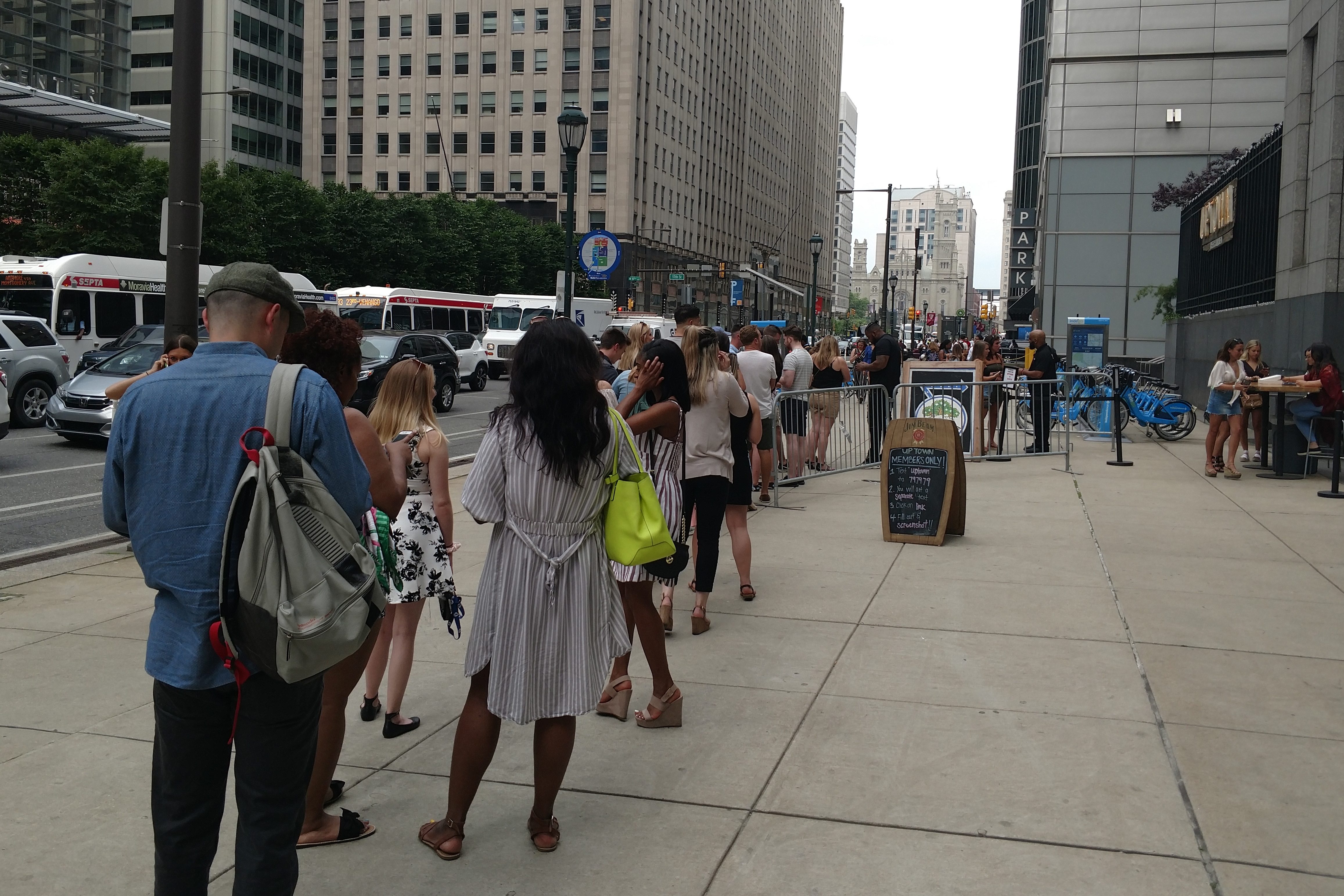 As I got closer to the front, the line began to get backed up. Typical 2019 shit, I thought: People neck deep in their phones, oblivious to those behind them. But no — they were actually using the phones to get in.

Eventually I saw the sign — attendees have to show the bouncer a screenshot confirmation that they’ve filled out a “members” form online. I later discovered that this step is required at these kinds of pop-ups, but at the time I just weighed whether a closed-off space fronted by something that felt more like a nightclub VIP entrance than an outdoor party was worth it. Perfect for a Friday with friends, maybe, but a little too much hassle for a happy hour on hump day. 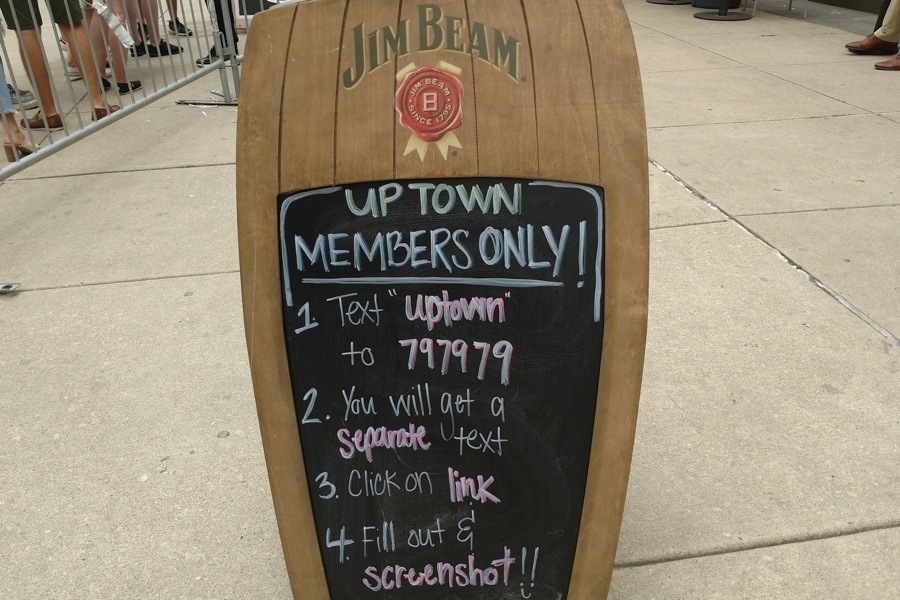 I set off again, walking right by the ever-cramped, ever-uninspiring Marathon Grill outdoor venue at 19th and Market on my way toward Broad Street. 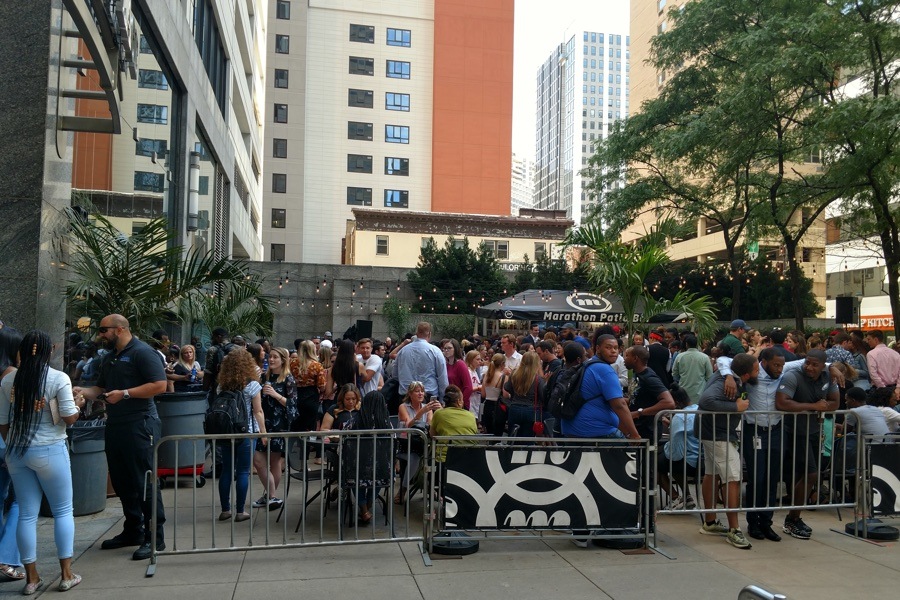 I eventually got my first drink of the night at the Marathon on Sansom, but the “rosé vodka mule,” made with EFFEN Vodka, tasted more like lemonade with a dash of spice and a whiff of alcohol cut with melting ice. I didn’t linger. 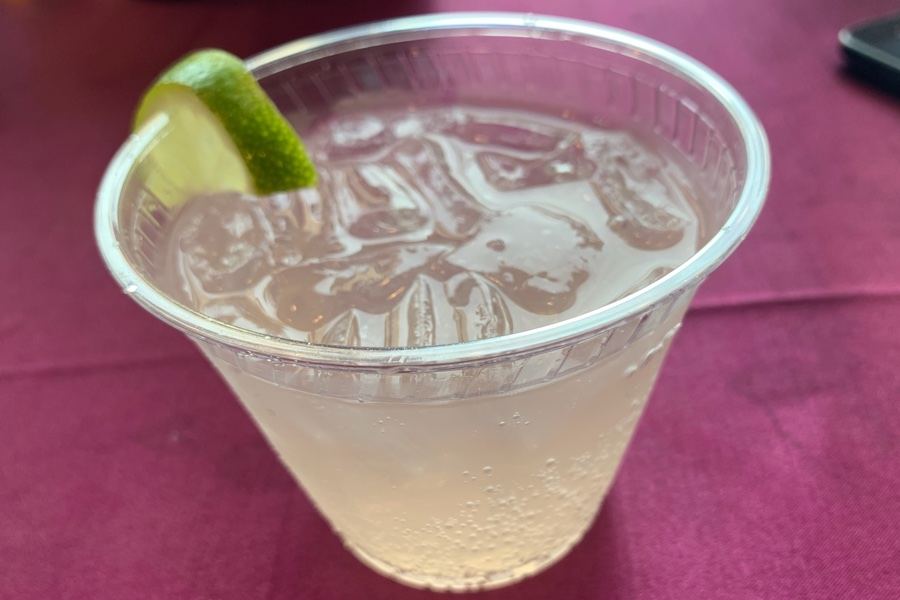 Giuseppe & Sons, one of the new venues added to the Sips roster, was a bit too stuffy for my interest: The super-dark space was occupied more with lawyer types and corporate suits than young professionals trying to mingle. The same can also be said for Harp & Crown next door. After a short stop at the Kimmel Center — which I’d been told was now the “height of sophistication for Sips,” but felt more like a summer party for a wealthy aunt trying to be “hip” — I called it a night.

My second attempt at the new Sips the next week did nothing to change my mind. On that night the scene at Tradesman’s, for example, was mild, and BRU had so much empty space on the main floor that it didn’t even feel like a Sips partner. It felt like I was going through the motions at this point: Nobody was dancing, and most of the action consisted of getting the right selfie look. 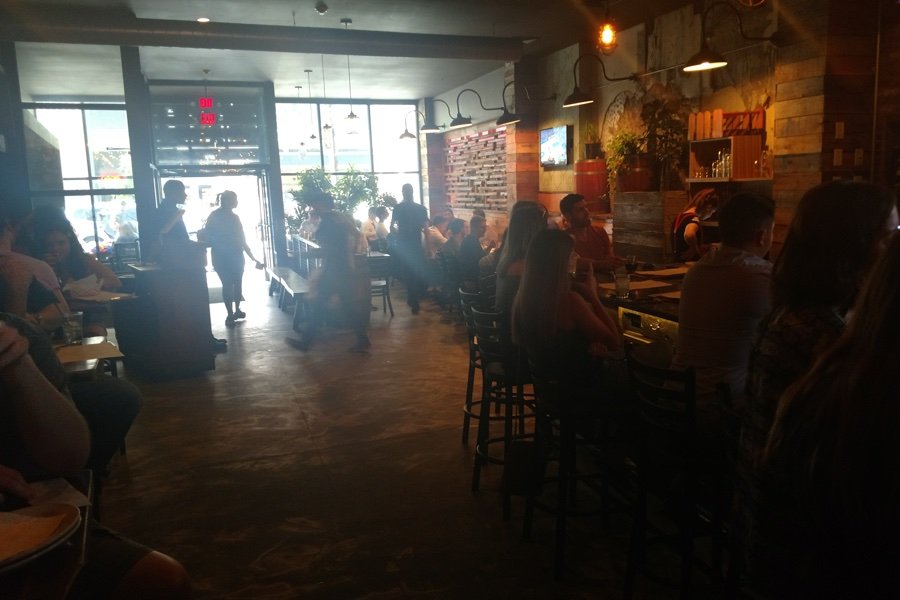 BRU with too much empty floor at Center City Sips.

I hate to admit it, but the “new” Center City Sips sucks. I get that nobody wants a sleazy frat party dressed up as a downtown happy hour, but we also shouldn’t replace it with a posh summer soirée that only my parents would find enjoyable. Go back to the drawing board, Center City District — this isn’t it.