The Center City District should pull the plug on the sloppy mess this summer happy hour has devolved into, before someone really gets hurt. 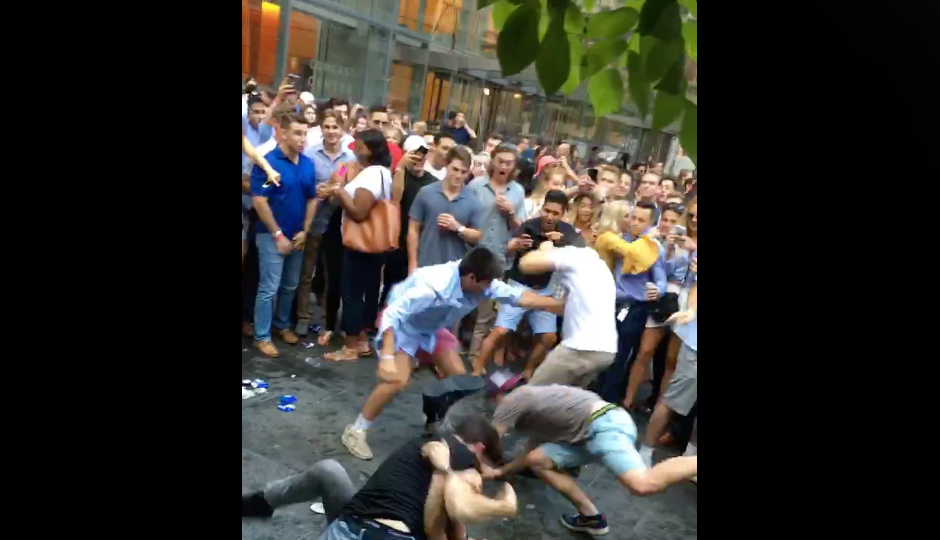 I haven’t been to Center City Sips in a couple of years. Not because I’ve outgrown it — you’re never too old for happy hour – but more so because it outgrew me. I was the event’s target market when I first started going: a young urban professional fresh out of college working downtown.

Sips was cool back then. It was a fun little summer thing where you got to wear your killer work khakis while getting bombed with your buddies. But it was a classy affair, albeit in a loose sense. Last time I went was probably in 2015. I saw some old faces from high school that I could’ve gone more years without, and all I can recall now is how crowded the damn place was. Definitely a “grab two beers each time at the bar” sort of deal.

Lately all I’ve been hearing from friends who still go is how much Sips has devolved into this over-the-top affair packed with college kids and Jerseyites who come over the bridge to raise hell in Center City. What? You don’t have half-price drinks in Cherry Hill? And shame on these misguided college students: You brats still get dollar beers on the reg while the rest of us are out here paying six bucks for a Yards.

Sips went from Restaurant Week’s funny drunk cousin into abusive alcoholic father. There used to be a handful of participating bars, but now we’ve got more than 80 venues, some holding upward of 1,000 people from God knows where.

And have you seen this fight that broke out on Wednesday outside the Comcast Center?

Not only was it weak as shit (no “Old Philly” Philadelphian throws a punch like that), but it totally puts a black eye on our city to have these frat bros out here tossing wild haymakers and kicking each other like they’re Jean-Claude Van Damme at an event for working professionals. At least when our city’s reputation was based solely on the miscreants in the 700 Level, the fights were still always must-see. Take this nonsense back to the suburbs.

And hockey fights weren’t the only embarrassment last night. Ohhh nooo. We also had people out at Sips hopping in fountains and acting a fool like it’s the Fourth of July on the Parkway:

So what do we do here as a city? And just to be clear, I’m not trying to say I’m above drunken college shenanigans. In fact, I’m sure it won’t come as a shock to hear that I was a party to many stupid things that shall remain unrecorded during my youth. That’s not the point. I did all of that dumb shit in the proper place: at college! Not on the downtown streets with adults looking to get a buzz on after work for whatever reason.

Here’s what the Center City District, which promotes the weekly event, had to say about last night:

“The CCD regrets that inappropriate behavior by six individuals in a 20-second incident that disrupted a relaxing after-work event at one of 90 participating venues last evening has cast a shadow on a highly successful promotional event that hundreds of thousands of guests have enjoyed for more than 11 years,” Michelle Shannon, VP of Marketing and Communications, tells Philly Mag. “The CCD is responsible for marketing the SIPS promotion and continues to urge guests to behave in a responsible manner and bars and restaurants to monitor the safety of their guests.”

So if eliminating Sips is off the table, how can we effectively enforce responsible behavior for this boozefest? More bouncers ready to kick anybody out at will? Is that the right solution? Either way, I know where I’ll be on Wednesday nights after work: on my couch with a six-pack and away from this nonsense. Go home, Sips — you’re drunk.