It’s such a natural fit that you can’t help but wonder what took so long. 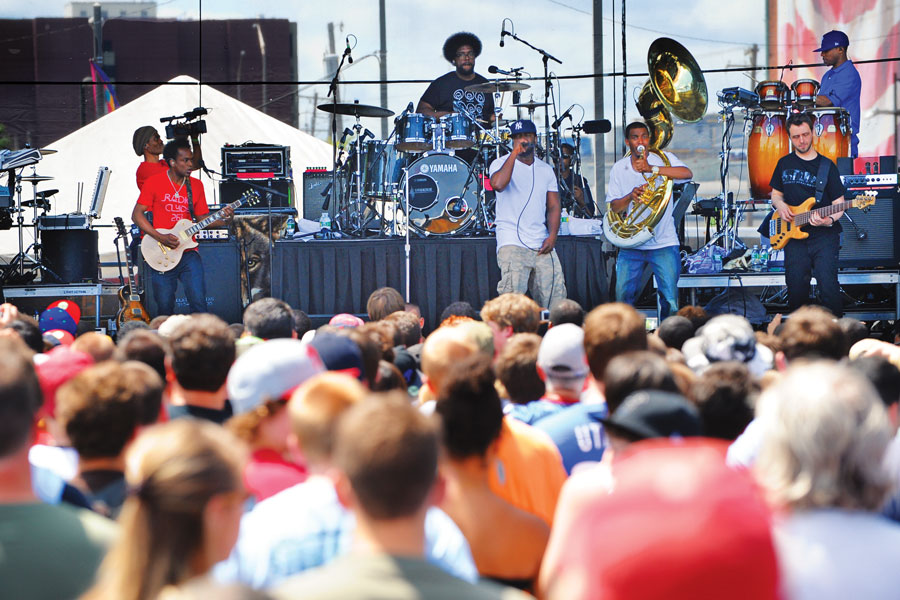 Fewer tears will be shed for ye olde Festival Pier, a sun-baked parking lot just north of the Ben Franklin Bridge that closed down for good at the end of last summer. Some days, you felt like you were watching a concert on a pizza stone, but the place could be charming once the sun went down and the breeze came rolling off the Delaware — at least, until the lights came up and you were ushered out in Temple Grandin-style cattle queues.

Plans for an upriver replacement have been ensnared by zoning issues. What we’ll miss in the meantime is that midsize downtown fresh-air venue, a hassle-free spot at which to see artists of a certain size. No Festival Pier means the annual Hoagie Nation fest, headlined by hometown soft-rock royalty Hall & Oates, is taking the year off.

But for the Roots Picnic, this is a chance to scale up. After 11 years at Festival Pier, Philly’s hip-hop heroes announced that their annual festival was moving inland, to the lush, hilly embrace of the Mann Center. “Finally we have GRASS to have a real picnic!” bandleader Questlove exclaimed on Instagram, before announcing yet another expertly curated lineup for the June 1st jam.

It’s such a natural fit — a picnic at the Mann — that you can’t help but wonder what took so long. Maybe it’s that the Roots are in league with Live Nation — their manager, Shawn Gee, runs the Live Nation Urban imprint — which booked the Pier, while the Mann is usually booked by the other big promoter in town, the Bowery Presents, though the city-owned Mann also hosts non-Bowery events like the Orchestra’s summer series.

So really, it’s all about timing. Festival Pier is up on blocks. The Picnic is ready to grow. The Mann recently underwent $11 million in renovations.

Is this a permanent thing? Nothing’s set in stone, but it’s hard not to hope. “I truly believe the relocation means that the Picnic has found its home,” says Toby Blumenthal, the Mann’s VP of artistic planning and chief innovation officer.

Judging by the official festival map, the Roots are using every available inch of the place, with a DJ and podcast stage, a “lifestyle area,” picnic benches and food trucks. There’s even a stage situated outside the Mann’s usual confines, in the parking lot out front. Never forget your roots.

Published as “Greener Pastures” in the June 2019 issue of Philadelphia magazine.