“I was skeptical,” says Indy Hall co-founder Alex Hillman, who switched his company from “incompetent” Comcast to PhillyWisper. “Internet through the air? But they made me a believer.” 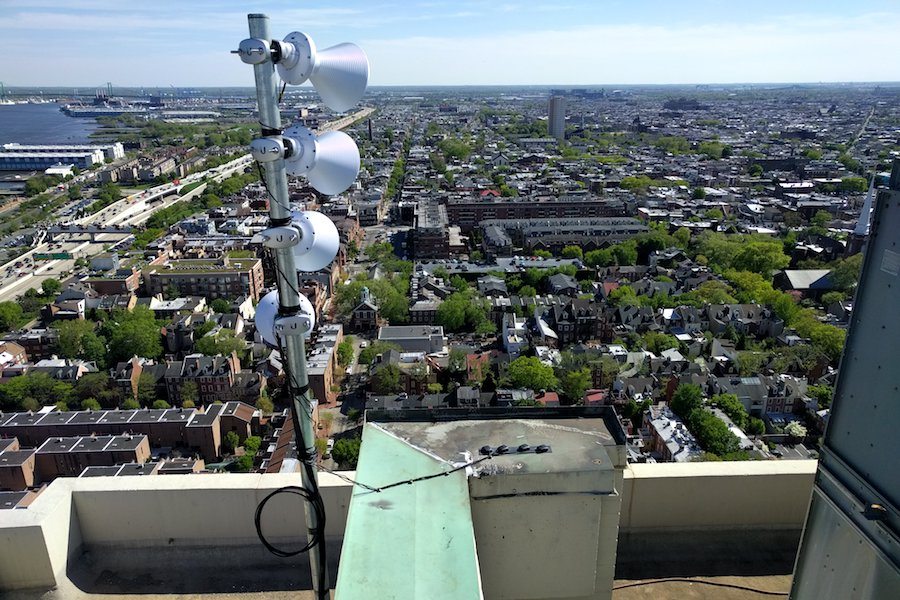 PhillyWisper just installed this radio antenna array in a spot that will allow many South Philadelphia residents to get cheap internet service.

PhillyWisper provides access to the Internet through radio waves. The cost is $50 per month. No contracts. No fee hikes after six months. No “bundles.” No router rentals. (You buy your own.)

“Device rental is a scam,” says Mark Steckel, who co-founded PhillyWisper in 2015 after a tech career at Huffington Post and Change.org. “You pay a company $12 a month for years for a device you can buy for as low as $50.”

There’s a data center at Broad and Callowhill where PhillyWisper, like other Internet service providers, has its primary connection to the Internet. And then the company uses a series of radio antennas starting at that data center to get the Internet to its customers.

The trick is, you have to have a line-of-sight from the roof of your house, where PhillyWisper will install a small antenna, to their main antenna array in your neighborhood. If there’s anything blocking that line-of-sight, they can’t give you service. You know how you lose radio stations when driving through a tunnel? It’s sort of like that.

In most cases, PhillyWisper can determine whether your address is serviceable by simply looking at Google Earth, and the company is currently working with researchers at the University of Pennsylvania to figure out what percentage of Philadelphians could be customers.

PhillyWisper has about 1,000 users from Kensington in the north to Society Hill in the south, and thanks to the pictured antenna array they just installed in an undisclosed location, their radio signal now stretches to Washington Avenue.

If you look closely at the photo, you’ll see the Walt Whitman Bridge in the background, and Steckel says that PhillyWisper’s next move is to bring the service to Camden on the other end of that bridge. He also has his eyes on Fairmount and the Art Museum area, and parts of West Philadelphia are on PhillyWisper’s radar as well.

PhillyWisper also provides a more expensive option for businesses in the areas they serve. One business customer is popular Old City co-working space Indy Hall, which signed on with PhillyWisper after having terrible experiences with a certain Philadelphia Internet service provider.

“Comcast is incompetent,” says Indy Hall co-founder Alex Hillman. “We literally never got the speeds we were promised. Outages were frequent. And Comcast could not muster the capability to actually fix the problem.”

Hillman says that when he first heard about PhillyWisper and its novel approach to providing Internet service in Philadelphia via radio waves, he wasn’t exactly sold.

“I was skeptical,” he admits. “Internet through the air? But they made me a believer. I am very happy with Wisper.”

Hillman said he had concerns that bad weather would cause service problems, but that hasn’t happened in the year and a half he’s been a customer, and Steckel says that weather is almost never a factor in his ability to provide reliable service.

OK, so that’s all well and good. Never having to talk to Comcast or Verizon again is a pretty motivating motivator in and of itself. But c’mon, all we really care about is whether Game of Thrones is going to keep pausing when we’re streaming it over the HBO app on our Apple TV while the kids are using the wifi for whatever it is that they’re doing.

No, insists Steckel, who promises customers that PhillyWisper delivers a minimum of 25 Mbps up and down — I’m currently on Comcast, and Comcast’s own speed test tells me that I’m getting 16.5/5.5 right now — and he says that customers sometimes see speeds closer to 100Mbps or a bit higher.

“See, other companies would take that information and advertise that they offer 100Mbps Internet service,” Steckel points out. “But there’s always an asterisk next to those claims. We want to distinguish ourselves as affordable hassle-free Internet without a fight. And when you call us, you get a live person who knows what they’re talking about.”

When I called PhillyWisper to see if I could get the service in my neighborhood in West Philadelphia — alas, not yet — Steckel was the one who answered the phone. This is one case where smaller definitely is better.