Philadelphia is one of only two major cities that don’t impose municipal council term limits. Think that might have something to do with our stagnant politics? 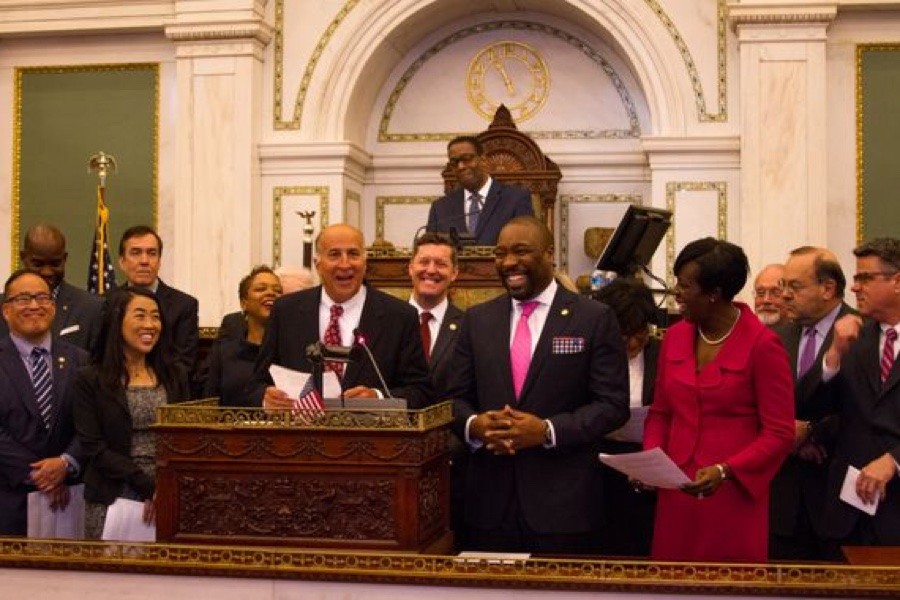 Philadelphians could have a chance to cast the most radical ballot referendum vote in years during the May 21st primary election — if a self-interested City Council contingent would just get out of the damn way.

“The reasons behind this charter change are simple: Eight out of the ten largest cities in the country impose term limits. They allow for fresh ideas and increase diversity in City Council candidates — creating a more engaging democratic process for voters and candidates,” Domb said in a statement. “Term limits move officials to make bold policy decisions and to hold leaders accountable.”

I couldn’t agree more. Domb’s proposal is perhaps the most inwardly accountable bill a City Council member has proposed since 2010, when former Councilman W. Wilson Goode Jr. made a similar call for term limits — and lost. Sadly, it appears as though Domb’s attempt is headed for the same fate.

Overall, seven of the 17 sitting City Council members are currently in their third or greater term. Four of the 10 who represent specific districts and are running for reelection have already announced they’re not supporting the bill — Jannie Blackwell, Brian O’Neill, Kenyatta Johnson, and Curtis Jones. With the exception of Johnson, all of them are currently serving at least a third consecutive term in office.

“I think [the bill] is DOA,” Blackwell, a Democrat who has represented the 3rd District for more than a quarter of a century, told the Philadelphia Tribune.

“It’s a solution without a problem,” said O’Neill, a Republican who represents the 10th District and, at 39 years and counting, is the longest-serving member of City Council. “It’s anti-democratic and anti-American.”

Anti-democratic? I’m 27 years old, and O’Neill was in office long before I was even conceived. Anyone serving in the same seat for that long has some damn nerve lecturing about democracy.

In a country where there are term limits on presidents, governors, and mayors, Philadelphia’s City Council — like our nation’s Congress and Senate — has a problem with incumbencies. And while the Philadelphia Inquirer‘s editorial board seems to have no problem with that, writing on Tuesday that “City Council should let its boss — the voters — decide how many terms is too much,” we should consider the systemic issues that thwart the system.

According to research conducted by the Pew Charitable Trusts, members of Philadelphia City Council have served longer, on average, than their peers in 14 other big cities, with some of the longest-tenured council members in at least the past six decades. In the 2015 election cycle, eight out of the 10 Council District seats had no challengers. But just because your ever-increasing name recognition and its accompanying fundraising advantage can scare off challengers and keep you winning for more than a decade — or four — doesn’t mean that it’s a good thing for Philadelphians.

There’s even a bottom-line argument here: Keeping incumbents in office for such a long time has hurt the city’s pocketbooks tremendously through the Deferred Retirement Option Plan (DROP) program. Remember former City Councilwoman Marian Tasco, who garnered a $478,000 payout in 2011 after retiring on the final day of her then-previous term, only to be sworn in for a new term the following Monday? Tasco, who served in office for 28 years, was able to collect nearly a half a million dollars in early pension benefits because of her tenure. Former Council president Anna Verna, while she actually stayed retired after serving from 1975 to 2012, got a $566,000 payout. Term limits would greatly help reduce this kind of monetary incentive to stay in office as long as possible.

While these reasons aren’t likely to persuade a career politician gunning for a fourth or greater term in City Council, democracy demands that something be done. In a city that is rapidly changing, our power structure should reflect that. According to a 2015 poll by the political action committee Philly 3.0, more than 70 percent of Philadelphians support term limits. I am one of those individuals who think that not only is it necessary for city government, but will determine the survival of our democracy.

If City Council doesn’t pass this commonsense bill, we should prove to every incumbent that term limits are an idea whose time has come — by voting for every single one of their challengers.