With at least 10 other coffee shops within a few blocks (including two other Starbucks locations), people are wondering: Is this really the best use of public space? 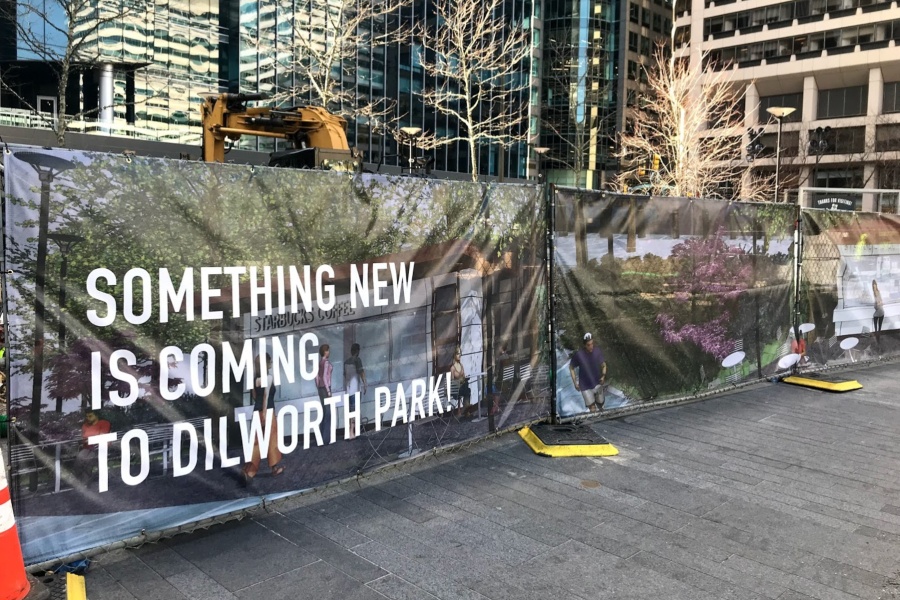 Construction on the Starbucks coming to Dilworth Park began this month. | Photo by Natalie Crane

When news broke back in December that a new, plant-adorned mini-Starbucks would soon open in Dilworth Park, PlanPhilly pointed out a simple fact (which has pretty much all Philadelphians scratching their heads right now): It’s a mere 446 feet away from another Starbucks.

And while we’re discussing distances to nearby coffee shops, we’ll point out that the new location is also about a block from a Temple University-owned coffee shop that serves Starbucks, as well as across the street from the Philly-born La Colombe, three Dunkin’ Donuts, a Bluestone Lane, Passero’s Coffee Roasters, Parliament Coffee, and yes, another Starbucks — all within a few blocks.

Paul Levy, president of the nonprofit Center City District — which manages the park and proposed the coffee shop — offered a curious response to PlanPhilly back in December. “All of us are lazy,” he said. “Walking two blocks to a cafe for a drink is not human nature these days.”

Let’s hope — for humanity’s sake — that people are still willing to walk more than 446 feet to fetch their precious pumpkin spice lattes.

Either way, the new Starbucks is coming. Construction on the shop began this month and is expected to wrap up in April. It’ll be a small, walk-up coffee stand with no seating, run by the local Brûlée Catering company (like its neighbor at the Dilworth Park Cafe on City Hall’s northwest corner). And, like all new things these days, it will be covered in greenery.

Many Philadelphians aren’t happy. Chief among them is local art blogger Conrad Benner, who called the move an example of “bad leadership” in a post on his website.

“I can think of so many better things to build on this tiny parcel of land, if the goal of this add-on was to better serve Philadelphians,” Benner wrote. “Things like … playground equipment for all the kids who enjoy the park to use. Or how about a mini-public library with select community-related services. Or even free-standing mural walls to feature rotating murals by local artists. I guess the answer is obvious, this was not built to better serve the public.”

Benner said that while he typically values public-private partnerships like the one between the city and the CCD (which manages the public park — and, it’s worth mentioning, has provided amenities like the Dilworth Park fountains, as well as the ice skating and roller rinks and a slew of public events), he thinks “our public space is too valuable to be sold off like this just for profit.”

He’s definitely not alone. Philly paparazzo HughE Dillon weighed in on Twitter. As did many others, including some who pointed out the freshness of the controversy that unfolded when two black men were arrested in a Starbucks in Rittenhouse Square last year.

These are just some of the Starbucks already in Center City and yet @ccdphila is proposing to put one IN Dilworth Park, across from 3 local coffee shops like @LaColombeCoffee?https://t.co/TuJ0GrYEhm

.@ccdphila why are you putting corporate interests over public good? pic.twitter.com/3R3fsFxHVZ

Genuinely annoyed that they are putting a Starbucks in Dilworth Park by City Hall. I used to give the company a break because they paid better and at least dangled health insurance over workers' heads but I don't know after that racist manager and the CEO's presidental bullshit.

Put a Target on Dilworth Park with a Starbucks inside of that, cowards. https://t.co/xnH9Uz5mt1

It’s important to mention that not everyone sees the location as a loss, though. Certainly at least more than one person is “hype afffff” about getting another spot for their speciality drinks.

And Drexel University’s urban strategy program has apparently tried (and sort of failed) to make the whole thing a lesson in public space.

A new Starbucks going in at Dilworth Park. Is this the result of “bad leadership” or are we excited to get our ventinofoamsoymilkcaramelextrahotlatte fix on the way to City Hall? https://t.co/4kbRGVlxZt

Emphasis on the public! Preserving the ownership of and access to public spaces in Philadelphia is a constant discussion at URBS. What do you think is the line? Is there any room for public private partnerships in parks? Is the problem that it’s a Starbucks?

The only mark we’re aiming for here is to hear people’s opinions! Thanks for sharing yours.