Why Is It So Damn Hard for Philly to Bring Back Citywide Street Sweeping?

We’ve gone from being street-cleaning pioneers during Ben Franklin’s time to the last major U.S. city without a comprehensive sweeping program. 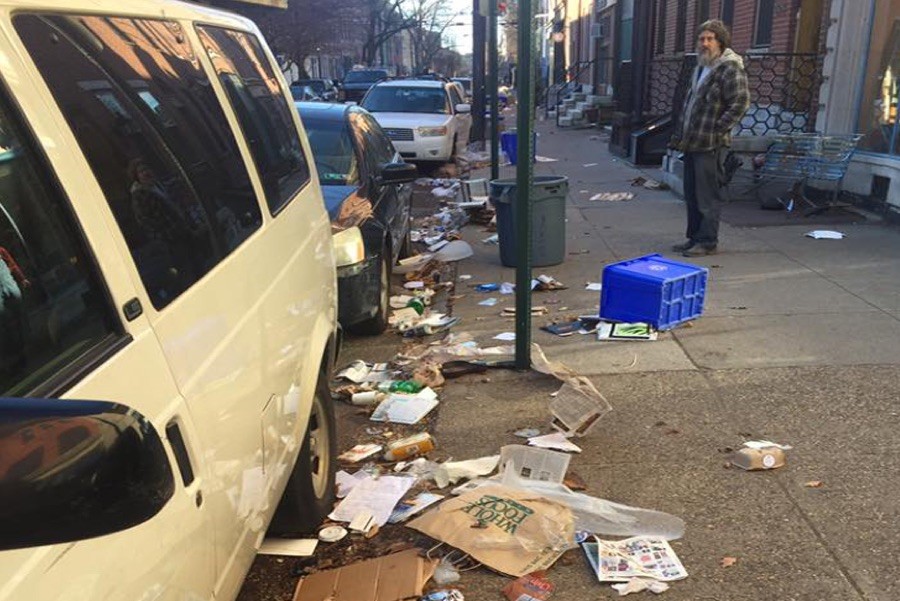 For as long as there’s been trash, Philadelphians have griped about having to pick it up. In fact, we even gripe about having someone else pick it up for us. That’s how we find ourselves in the present situation: living in the only major U.S. municipality without a citywide street-sweeping program.

The classic argument against sweeping, which goes back decades, is that you have to move your car for those bulky sweepers to bump up next to the curb and suck up the trash.

Enter city officials, earlier this month, with a fancy new idea: What if, instead of relying exclusively on those machine sweepers, the city hired manual laborers to blow trash out from underneath parked cars, which could then be swallowed by the machines?

No one will have to move a car! And the only tradeoff will be … the occasional urban trash tornado?

Forgive me for thinking there has to be a better way.

It should be noted that Philly used to have a fairly comprehensive program, which was ended in 2009. New York City, on the other hand, has had its act together since 1895, when George E. Waring Jr. kickstarted a cleaning revolution at the NYC Department of Sanitation. A New York Times reporter at the time raved over the results: “The asphalt pavement was absolutely clean. You could see the epidermis of the street.”

Fast-forward to today, where New York maintains a fleet of 450 street sweepers that traverse some 47,000 distinct routes, for a total distance swept of about 6,000 miles per day. Sure, it’s a pain for motorists, who have to move their cars every so often. But at least according to the Sanitation Department’s own internal data, it appears to be worth the hassle: In 2017, the department reported that more than 95 percent of NYC streets were “acceptably clean.”

Meanwhile, Washington, D.C., spends nearly $5 million annually on its sweeping program, which removed more than 4,300 tons of trash last year from local thoroughfares. (It may be a swamp, but at least it’s a clean one.)

And in Philly? You might be able to see the epidermis of our streets, but I’m pretty sure they’re wearing charcoal face masks.

The city does sweep a modicum of streets — 33 in total, largely in commercial districts, along with eight additional routes — but it’s hardly exhaustive. We spend less than $1 million per year on our cleaning efforts. And according to the city’s own “Litter Index,” well, a lot of the city is filled with litter.

Streets Commissioner Carlton Williams says that asking residents to move their cars every week is simply unreasonable in a dense city like Philly. “In North Philadelphia and South Philadelphia, it would be virtually impossible for [residents] to try to move cars to another area or another section of the street,” he says. “There’s literally no place to go.” Of course, New York manages to find a way to ask its denizens to move once (or sometimes even twice) a week.

“I certainly would like to talk to them to see how effective their program is,” Williams says.

Here in Philly, the status quo doesn’t appear to be such a great option. According to a recent Plan Philly investigation, the eight supplemental routes the city is supposed clean are only getting swept about 25 percent of the time. But that isn’t stopping the Parking Authority from ticketing cars for blocking the (nonexistent) sweepers.

Williams says the low-show rate when Plan Philly was investigating is a consequence of bad timing more than anything else: “During that time, we were running behind on leaf collection, and we reassigned those brooms.”

We weren’t always this inept. Back in 1916, according to an old Literary Digest magazine story, the city had an officially appointed street-cleaning czar by the name of Mrs. Edith W. Pierce. Edith’s job was to organize cleaning cohorts, made up of school children and housekeepers, and assign them little swaths of street to beautify. (She was apparently also the only woman in the city to own a police badge.)

And now 103 years of growth and grime later, the city’s new plan is basically the same: hire a small army of Ediths to get the trash — since nobody can be bothered to move their cars and make way for the machine sweepers.

Mayor Jim Kenney has tried to sell the public on a street-cleaning program similar to every other big city’s. “They do [street cleaning] once a week in Manhattan, and parking is no easier there than it is in South Philadelphia,” he told the Inquirer back in 2015 as a mayoral candidate. “I can’t see why everybody should suffer as a result of the selfishness of some people that just don’t want to move their cars for a couple hours one day a week.”

But don’t just listen to the mayor. Take it from Ben Franklin, one of the early pioneers of street cleaning in American history.

Franklin noted in his autobiography that city streets used to be filled with muck. “The reason given for not sweeping the dusty streets,” Franklin wrote, “was that the dust would fly into the windows of shops and houses.” (A minor annoyance, to be sure! Perhaps the 18th-century equivalent of having to move one’s car?)

Undeterred, Franklin pressed onward and instituted his sweeping program. The initial hesitance of the populace, Franklin wrote to a friend, soon wore off: “All the Inhabitants of the City were delighted with the Cleanliness of the Pavement that surrounded the Market, it being a Convenience to all.”