An Anonymous Wawa Employee Tells All

The longtime Wawa worker tells us about bloody in-store fights, idiotic customers, and the one sandwich you should never, ever order. 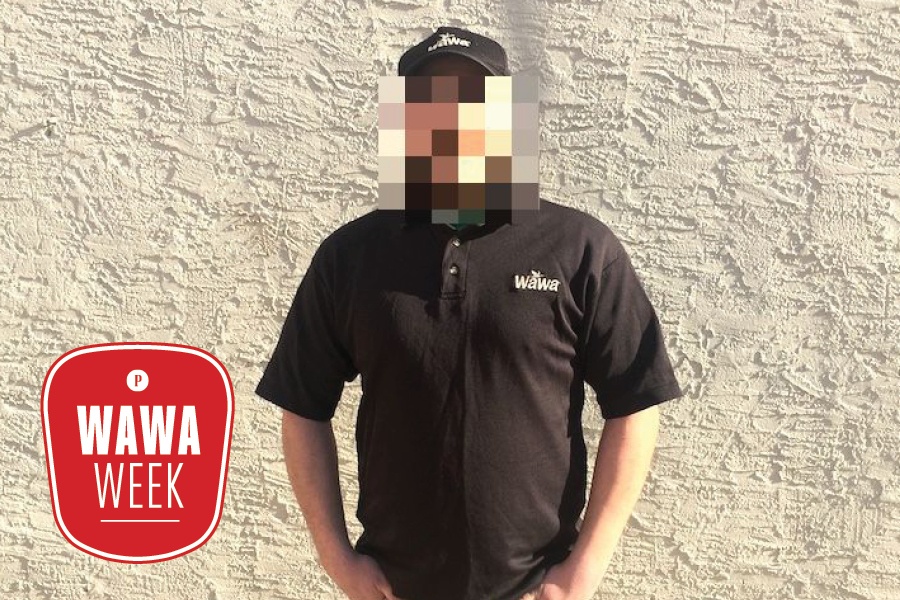 The Wawa corporate office is plenty helpful when it comes to press inquiries, but, as we all know, they just give you the party line. For something a little different, we spoke with a veteran Wawa employee who has worked at multiple locations within the city. Here’s what he had to say.

Did you grow up dreaming of working at Wawa?
Absolutely not. It was my first job in high school, and I just never left.

So I’m guessing most people are ordering turkey sandwiches, Italian hoagies and things like that. Any really odd orders?
I’ve seen sandwiches where I think “This has to be a joke.” Like, who would order a meatball sandwich with yellow mustard on it? That’s not OK. One time, there was a local scavenger hunt and one of the items they had to get was a Wawa hoagie with everything you could possibly get on it. It was very annoying to make. I made five of them that day. It was so obnoxious.

What one thing should a person never, ever order at Wawa?
The cold Gobbler sandwich. Do you know about that one? The regular Gobbler is hot turkey with gravy. But the cold one is made with cold lunchmeat turkey, and it’s a terrible sandwich.

And what’s your favorite thing to eat at Wawa?
I’m a big proponent of our meatballs. And people crap on our pretzels, but they are actually really good.

Is the Broad and Walnut Wawa as terrible as people say it is?
Day shift is pretty OK, but it’s insane there at night. But all the Wawas in Center City kind of have crazy overnights, and so do the Port Richmond Wawas, like Aramingo Avenue and Richmond Street. And one of the South Philly Wawas is crazy because it’s close to all of the strip clubs. So it has quite the late-night crowd. Lots of fights.

I’ve never seen a fight at a Wawa, I have to say.
I’ve seen a fight where one guy smashed the other guy’s head on our counter and broke that charity change thing. There was blood all over the counter. It was insane. And then at a gas store, a customer was on drugs and freaking out in the parking lot and punched through their own car window and bled all over the parking lot. And one time, a manager tried to break up a fight and one of the people fighting maced the manager.

How are the other people you work with? Lots of idiots?
Not really. I work with mostly reliable and consistent people. It’s not the other workers that’s a problem. It’s the customers.

Do tell.
The customers are so bad. People are impatient and rude. They need their hand held.

There are people who come in and see the touch screens. We’ve had touch screens for years, and there are regular customers who come in and say “I don’t know how this thing works.” And I’m just like, you have all of the things you need to do this. You can read. You have fingers. You literally just touch what you want. You touch the thing you like. That’s all you have to do!

I’ve also had customers who come up to me and give me a coffee order. And I say, “Oh, it’s self-serve.” And they don’t understand. It’s a very stressful customer service environment. People are oblivious.

So, oblivious and needy, but you mentioned rude as well.
Yes. Obviously, I have to keep the store clean and straighten up after people, but people just blatantly throw garbage on the floor and then say that it’s my job to clean it up. Well, yes, yes it is, but … In the summer, one very sweaty man came in and asked for napkins and I said, yeah, I have napkins, and then he wiped all his sweat off of his body and went to hand them to me. He wanted me to take them! That is not my job. My job is not taking your sweaty napkins. People think we are their personal servants. It’s a bit much.

And I bet they complain constantly.
Customers give me a hard time about homeless people and panhandlers outside the store. That’s something we pretty much can’t do anything about. We can ask them to leave, [but] they won’t. We can call the police and the police can only ask them to leave, and they’ll come back right back in 20 minutes. It’s something customers can be really mean about that we’re pretty helpless about.

Also, us confronting them is a safety issue. I’ve had co-workers followed home, swung at, etc., over dealing with unstable loiterers. It literally makes a hostile work environment for us, so people giving us a hard time about it is really unfair.

How many people come in on a given shift?
Our old register system used to show us how many people we rang up in one day. Our new one doesn’t do that. But I will tell you that when the registers did that, on a slow day, I would ring up 700 people. So easily the high hundreds or more than 1,000, or thousands depending on the store and how busy it is. That’s one register.

What’s the money like?
The manager of a gas store can hit six figures. For an easy customer service position, you can get $14 an hour.

Is the stock that Wawa gives its employees of any significance?
Absolutely. I can’t confirm this, but there’s talk of a thing called the Million Dollar Club of people who have been there so long that when they cash out their stock, they can get $1 million or more. I’ve known people who have left Wawa and taken their stock out and they’re able to live comfortably for some time. And since I’ve been with Wawa, the stock has increased significantly in value, so I will do well.

Do you agree that the rolls used to be better?
Yes, of course. They switched from fresh Amoroso rolls to parbaked rolls. Cheaper but not as good. We finish baking them in the store so they say they are fresher, but really the old Amoroso rolls were better.

Do you like the coffee?
I don’t drink coffee at all, which is a huge waste because we are allowed to have three free cups each day. We also get discounts, but only while we are on the clock and only for Wawa-branded items. I think it’s 33 percent off for most things and then they have a bigger discount — I think it’s 50 percent — for what they call the employee wellness menu. Healthier stuff.

What’s the most popular non-Wawa product in the store?
Newport cigarettes. Definitely.

Best Wawa side item?
The mac and cheese, hands down. I’m not sure, but I think it’s Stouffer’s.

Best Wawa beverage?
Everybody is sleeping on the Wawa Blackberry Iced Tea. It’s awesome. It’s so sweet, like a child’s drink, but it’s so good.

Do you have a big problem with shoplifters?
Oh, it’s real bad. Red Bulls. They love to steal Red Bulls. And the big beef jerky things.

And how is the company itself to work for? Do they treat employees well?
They’ve done right by me, which is why I’ve been there for a long time. It’s a pretty solid company. I have benefits, stock, and there’s a lot of opportunity to move up. It’s a company that’s good to work for, but it’s not, like, my passion or anything. [Laughs]. It’s just a job.