Thousands are expected to celebrate on Saturday outside a neighborhood bar on Oregon Avenue. 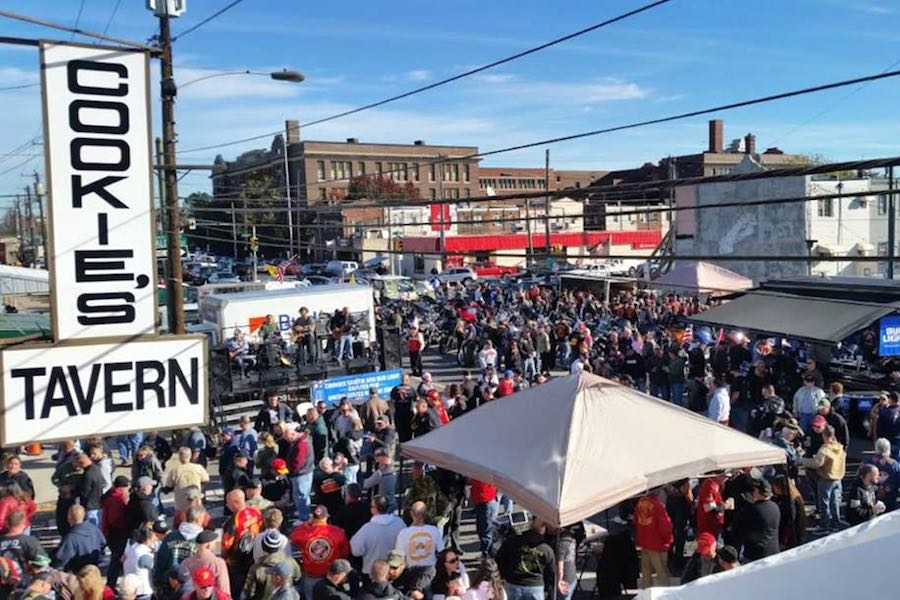 The crowd at a Marine Corps birthday party outside of Cookie’s Tavern in South Philadelphia. (Photo courtesy Jeff Belonger)

South Philadelphia evokes many images and ideas: Cheesesteaks. Rocky. Stoop sitting. Gaudily decorated front windows. The list goes on and on. But one thing that most people probably don’t associate with South Philly is the Marines Corps. And yet, one of the country’s largest Marine Corps birthday celebrations takes place right in South Philly outside a corner bar.

Saturday, November 10th, marks 243 years since the day that the Second Continental Congress — right here in Philadelphia — established the Continental Marines. Each year, Marines across the country celebrate the occasion on that day with a variety of events and ceremonies. Here in Philadelphia, that takes the form of thousands of people shutting down Oregon Avenue.

“We’re expecting a really huge crowd this year, especially because it’s a Saturday,” says Salvatore DiNubile, owner of the neighborhood taproom Cookie’s Tavern, which has been the center of the festivities for more than 40 years. “It’s hard to say how many exactly, but last year we had somewhere between 3,000 and 5,000.”

DiNubile, 44, bought Cookie’s Tavern about two years ago from the the family of Marine Corps sergeant “Daddy Wags” Wagner, who started the party after he came back from two tours in Vietnam. Wagner died in 2002.

“Every year on November 10th, Wags and his Marine Corps buddies would toast each other at the bar,” explains DiNubile, who grew up in the neighborhood and worked at Cookie’s Tavern for more than 20 years before purchasing it. “They would do the same thing every year. People heard about it, and they’d show up, and then it just kept getting bigger and bigger.”

The party draws people from across the country, including new recruits and their families, Marines Corps veterans as old as 95, as well as vets from other branches of the armed forces.

“It’s one place where vets know that they’re guaranteed to see people that they served with who they haven’t seen in years,” DiNubile says.

There’s lots of beer consumed (DiNubile says he has 150 kegs of Budweiser products on hand), a bugler and color guard, various military jeeps, and one guy usually brings a howitzer and sticks it on Oregon Avenue.

DiNubile was certain that he’d continue the tradition after buying the bar, but that was all called into question last year when he almost pulled out of it. Tragically, a couple of weeks before the event, his son and another boy were gunned down in South Philadelphia, less than a half mile from Cookie’s.

“I had to pull myself together,” says DiNubile. “This turned my family’s life upside down. But so many people look forward to the party each year.”

Saturday’s event officially kicks off at 11 a.m. — though some revelers start as early as 9 a.m. — and continues well into the night. It’s free to attend.