One year ago, the statue — a popular gathering place for a white supremacist hate group — was vandalized. Now, it's been dragged into the Schuylkill River. 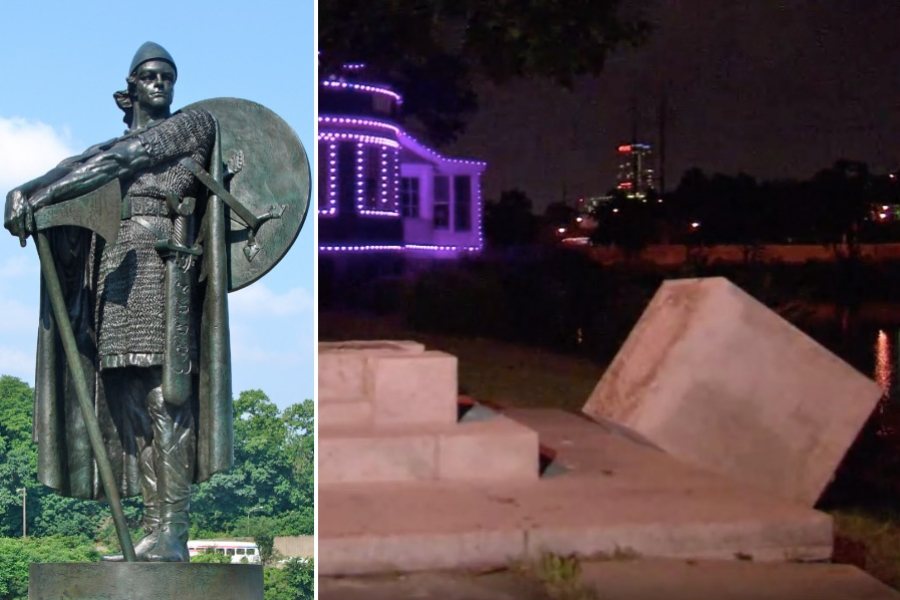 At sunset on Monday, Philadelphia’s nearly century-old Thorfinn Karlsefni statue stood tall and proud on the banks of the Schuylkill. But by dawn on Tuesday, it had succumbed to the murky depths of that river.

Police say that overnight — just after 2 a.m. on Tuesday — a group of six or seven people tied a rope to the statue of Karlsefni, an Iceland-born Scandinavian viking and early North American colonizer, and pulled it into the water. Only Karlsefni’s pedestal remained at daybreak.

Investigators, passersby and reporters wondered: Who would do such a thing?

Police don’t know who,how, or why yet. But the Viking statue/sculpture at Boathouse Row was pushed or pulled into Schuylkill River overnight. Toppled of its big base block also knocked over off the stone pedestal. @phillypolice say yellow strap was found nearby @FOX29philly pic.twitter.com/sKonVbgHlj

But it’s not the first time someone has damaged Karlsefni’s statue.

Almost exactly a year ago, the 7-foot-4-inch bronze sculpture was spray-painted with anti-Nazi language and an anarchist symbol, according to 6ABC.

That incident could have had something to do with the fact that — and we’re just speculating here — white nationalist group Keystone United holds its annual Leif Erikson Day Celebration at the site of the statue. Leif Erikson Day falls on October 9th. (For some viking background, Karlsefni followed Erikson’s route to Vinland around the year 1005 AD.)

Keystone United, founded in 2001 and known until 2009 as the Keystone State Skinheads, is “one of the largest and most active single-state skinheads crews in the country,” according to the Southern Poverty Law Center, which designates the organization as a hate group. (This is the same group that allegedly distributed white supremacist propaganda on Temple University’s campus.)

In the past, the group has clashed with Philadelphia’s Antifa protesters, who have repeatedly crashed the group’s annual October meeting at Boathouse Row. Last year marked Keystone United’s 11th annual gathering at the water.

A blog post from Keystone United (as well as the Schuylkill Valley Journal Online) notes that the Karlsefni statue was also vandalized in 2008 — then, it was reportedly covered in red paint.

Clearly, the Karlsefni statue is doomed to function as a flash point between Antifa and Keystone United — though, again, it’s not exactly clear who toppled the statue on Tuesday morning. Police just say they are searching for six or seven juveniles.

And in a truly Philly twist, some are also noting that the Eagles play the Minnesota Vikings on Sunday.

You think it has anything to do with the Eagles playing the Vikings this week?