Can We All Agree Now That College Rankings Are Bunk?

The fallout from the Temple business school scandal. 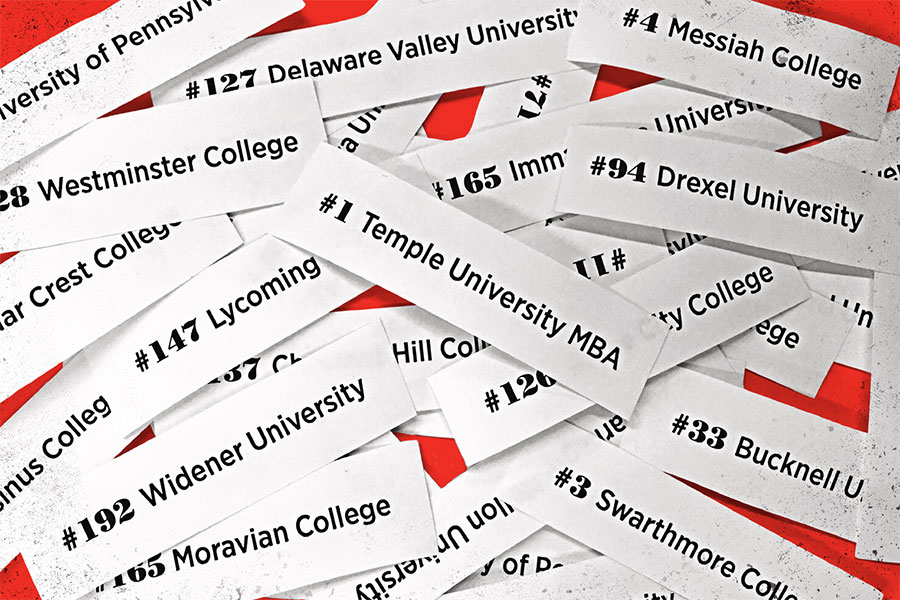 America loves a list. Twenty best places to live! Ten scariest movies! Eight ways to improve your love life! The downside, of course, is that lists are subjective: best places according to whom? Who’s to say what scares you will scare me?

This tension is encapsulated in the scandal now enveloping Temple’s Fox School of Business. Upon learning that Fox administrators deliberately falsified data, über-ranker U.S. News & World Report stripped the school of the number one “Best Online MBA Program” ranking it had held for four straight years. The school’s dean was dumped, U.S. News demanded verification of all Temple’s data, and a bunch of students filed a class-action lawsuit claiming that the stat-fudging constituted fraud.

We live in the Age of Analytics. The most important contribution of computers, it would seem, is their ability to slice, dice, and splice the infinite data points churned up by daily life. And yet higher ed is bucking the trend. No Ivy League school still requires the SAT writing test. Bowdoin, Wesleyan, and Bryn Mawr are among more than 1,000 American schools that have gone SAT- and ACT-optional. (The tests favor the well-to-do.) Serious grade inflation has devalued the GPA; nearly half of all high-school grads now have an A average. College admissions offices are relying on ever-snowflakier standards even as students and parents, staring at annual costs topping $60,000, grow more desperate for assurance their investment is wise.

The problem, as Malcolm Gladwell once put it in the New Yorker, is simple: “There’s no direct way to measure the quality of an institution — how well a college manages to inform, inspire, and challenge its students.” So the slicing and dicing in school rankings is arcane (proportion of professors with the highest degrees in their field?), potentially biased (schools are actually asked to rank competing institutions), and prone to, well, jiggering. Northeastern University’s president set out in 1996 to bust his school, then ranked at 162 by U.S. News, into the top 100. It took him 10 years, but by (among other things) making applying easier (so more students were rejected) and cozying up to those peer assessors, he got the job done. Today, 12 years later, Northeastern’s tied at 40.

In June, RateMyProfessors.com announced that it was finally — after years of complaints — dropping its chili-pepper “hotness” rating of academic instructors. Competitive school rankings are as irrelevant to meaningful education as that Scoville scale. It’s time for schools to stop expending resources on scamming the rankings — and for parents and kids to refuse to play that game.

Published as “Rank and Foul” in the September 2018 issue of Philadelphia magazine.