Whatever your recipe for the team’s success, somebody else’s is weirder. We know. We asked. 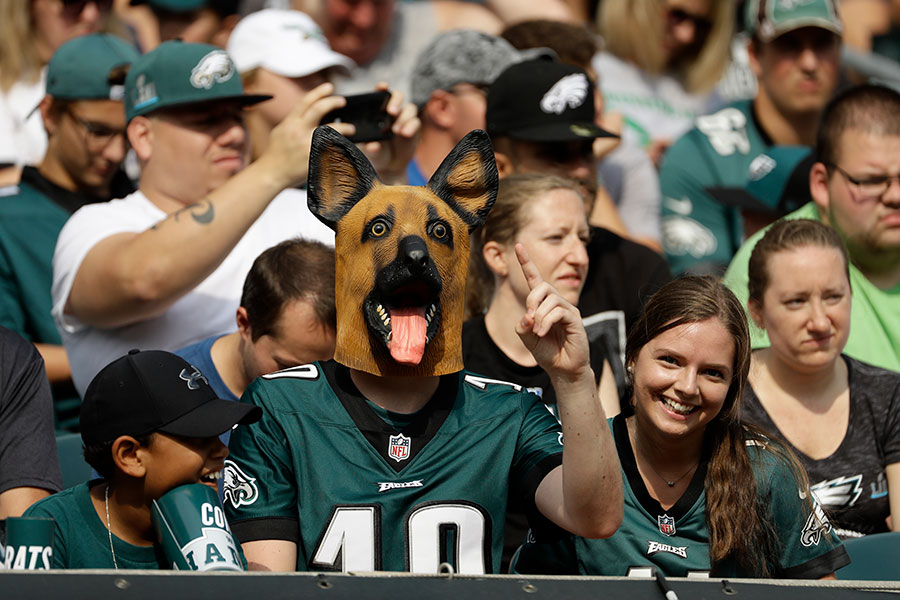 Is there a particular place where you have to be to watch the game?

Ajay: A Unabomber-like secluded cabin, but with more snacks — a.k.a. my basement theater.
Dom: Always in my BarcaLounger, facing the TV at a distance of 10 feet.
Tina: In my den, by the fireplace.
Bill: When I was younger, I believed that what was going on in my living room could absolutely influence the outcome of an Eagles game. The chief crime was if someone was in the room during the game but was not really into it. If this person walked in front of the TV, that pretty much guaranteed an interception.
Nana: At home, or with a friend or at a sports bar with other fans.
Neil: I never watch. I listen on the radio, sitting in the same chair at home.
Farah: At home.
Christine: I usually watch at the kitchen table, on the only TV in the house that’s not a flat-screen. I like the illusion of 3-D.

Are there particular people you have to be watching with?

Ajay: If I care about the game, solitude is a must.
Dom: I can’t have more than two people watching with me.
Tina: I like to watch the games by myself. They can be very stressful.
Nana: Other Eagles fans.
Neil: My dog, Tug. He sleeps on the sofa next to me.
Farah: My puppy, Mijo.
Christine: I need to watch alone, because I hate small talk. I make an exception when we play Dallas or the Giants, because it’s no fun to curse to myself.

Do you have to be wearing anything in particular?

Ajay: Nothing special, just a gray hoodie sweatshirt cinched tightly around my face and a pair of dark-tinted aviator sunglasses. Google an image of the Unabomber.
Dom: A Nick Foles jersey.
Tina: Normally, Lululemon.
Nana: Last year I ordered a teal blue down jacket. The color is spot-on Eagles green. I think it may have been a major factor in last season’s success.
Farah: No, but Mijo has to be wearing his Eagles jersey.
Christine: I wear black, but that’s because 90 percent of my wardrobe is black.

Do you have to be eating or drinking anything in particular?

Ajay: It’s a nonstop smorgasbord from kickoff until the end of the fourth quarter. I make the experience interactive by trying to ingest as many calories as the players collectively expend during the game. That really makes me feel like part of the team.
Dom: Bottled water is all that’s allowed.
Nana: Food and drink don’t factor into my rituals, although I do enjoy a cold beer.
Farah: No, but Mijo has to be enjoying a football-shaped doggie cookie.
Christine: Peanut Butter Tandy Takes — Kandy Kakes — and Butterscotch Krimpets.

Is there anything in particular you do to celebrate a score or win?

Ajay: No, no displays of emotion, no celebration. Just eating.
Tina: Normally, just lots of yelling at the TV no matter what’s going on.
Nana: Yelling, clapping, and annoying my cats and neighbors.
Neil: I talk to Tug as if he’s paying attention and cares about the game.
Farah: No. I don’t breathe during the game. I’m not a very animated spectator.
Christine: I scream. I sometimes run around the house. In 1978, at the first Miracle of the Meadowlands, I ran out onto the front porch, down the steps and into the street, having a general meltdown. I actually do this every time we win at the Meadowlands, but I’ve rerouted to the backyard so no one sees me.

Do you do anything in particular with your body at certain times in the game?

Ajay: My eyes are trained on the screen while my hand moves ceaselessly from the Tostitos Scoops bag to queso dip to mouth, as if compelled by some unseen force.
Dom: I stand and pace a lot.
Tina: You mean tense up like a human ball? No. No, I don’t do that at all.
Bill: Many times last year, I was watching Eagles games at home, about to shift on the sofa to a more comfortable position, and I would think, “Don’t move. They’re winning. You’ll ruin it.” And then I would catch myself and go ahead and move anyway. It felt good, like I was breaking a silly habit and becoming a more mature fan and person.
Nana: I text back and forth with my son at college in North Carolina. His superstition ritual for games puts mine to shame.
Neil: When I lived in Narberth, I would walk around town in the second quarter. When cars would drive by, every radio was tuned to the game. If house windows were open, the only thing you’d hear was the game. Like the famous scene from Quiz Show.
Christine: I usually sit in a lotus position, and I grind my teeth.

Do you ritualistically do anything specific at halftime?

Ajay: My buddies and I get on the phone and one-up each other with tales of our glorious youthful exploits on the football field.
Dom: Complain how bad the national announcers are.
Tina: Scroll social media and pick fights with non-Eagles fans.
Neil: I walk Tug.
Christine: Not at halftime, but before the games I chant this poem I wrote: Bring it home for Jerome/Use your might for Reggie White/Make a scoreski for Jaworski/Go much faster for LeMaster/Be a flyer like Keith Byars/Make that scramble for our Randall/And be regal, like an Eagle.

How long have you followed your rituals?

Ajay: Going on two decades now.
Dom: Most are over 10 years old.
Tina: As long as I can remember. My dad is a Cowboys fan — his friend played for them many years ago — and my parents would watch the games on different floors of our house growing up. My two brothers became Cowboys fans like Dad, and my three sisters and I are all Eagles fans like my mom. My biggest ritual is taunting my dad after a Cowboys loss to the Eagles.
Farah: This was my first season really watching any games at all. It was impossible not to join the Eagles championship madness — so much drama and heart.
Christine: Since 1973, which is when we got season tickets.

On a scale of one to 10, with 10 the highest, how dependent is the team’s success on your rituals?

Ajay: I’m smart enough to know that my rituals have no impact whatsoever on the team’s success, but not smart enough to stop doing them.
Dom: At least a 9.5.
Tina: Let’s say seven. If we’re doing incredibly well and I’ve missed a few games, I don’t watch. I just can’t bear to jinx it.
Bill: At 33, I started to work at Sports Illustrated. When you see how hard these players work and how much planning goes into each game, it becomes more difficult to believe that those games hinge on someone’s mother choosing the absolute worst moment to bring a bowl of potato chips into the living room.
Nana: A one. Except for wearing my coat.
Christine: As far as the team’s success, I would say a one. As far as my peace of mind, I would say a 10. There have been times when I’ve been abroad and couldn’t watch, and I still do the rituals around the time I know they’re playing.

Have you ever had the team experience something bad or tragic because you failed to adhere to your rituals?

Ajay: I’ve found the Eagles do better when I’m at home rather than at the game. But maybe I’ve just convinced myself of that to justify my silent snacking in the dark.
Dom: They won the Super Bowl, so I finally have the right formula.
Tina: No. Thankfully, they won the Super Bowl! And it was fun!
Bill: I watched the Super Bowl in a room where my wife [author Jennifer Weiner] was reading, because the game was “too stressful,” she said. I let it go. I never once bowed to my superstitions. That is why the Eagles won the Super Bowl. You’re welcome.
Nana: I hope not.
Neil: Tug passed in April. I am very worried about this season.