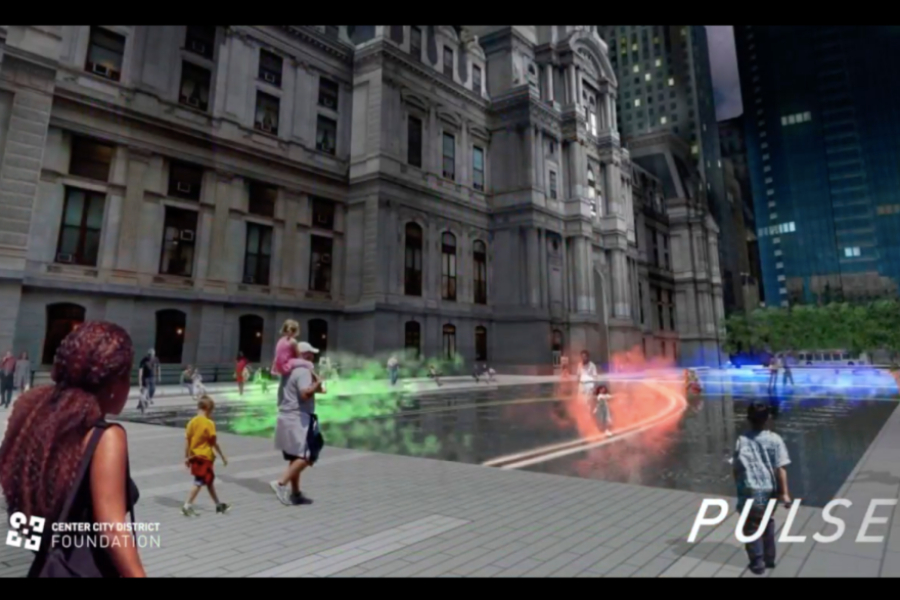 The fountains at Dilworth Park are about to get a makeover.

With Pulse, a new art installation coming to the park at City Hall, four-foot-tall sheets of blue, green, and orange mist will float above the fountains, mimicking the movements of the subways underneath the park. The coolest part? The mist is actually timed to appear when the subways do — and travel with them.

The first phase of Pulse, which is designed by sculptor Janet Echelman, is expected to open next month. On September 12th, the Center City District will reveal a portion of the project that covers SEPTA trolley lines (also known as the green line) with columns of green mist that move as the vehicles pass under Dilworth Park.

The art installation sounds magical — like something out of Harry Potter, even. So needless to stay, we’re excited to see it.

Pulse is part of the CCD’s $55 million Dilworth Park renovation in 2014. The art installation was commissioned in 2009, when Echelman, who often creates experiential and etherial sculptures in urban spaces, shared her vision for the 11,160-square-foot fountain.

Dilworth Park and City Hall stand on what William Penn once referred to as Centre Square, which Echelman said inspired her because of its historic associations with both water (it housed the short-lived Centre Square Pump House in the early 1800s) and transportation (a nod to the Pennsylvania Railroad).

Echelman has described Pulse as “a living X-ray of the city’s circulatory system.”

The CCD offers a description of the project on its website:

“During the construction of Dilworth Park, significant infrastructure was constructed to accommodate the installation of Pulse. The trench system and connections to underground water lines are in place. The complex fog-creation system has been fully designed and tested. Fully installed, Pulse will come to life, creating a captivating experience that is engaging, kinetic and unforgettable. Mist, ephemeral by nature, will help define the space with its rapid movement across the fountain surface, visible by day, glowing at night, to become a defining element of the Dilworth Park experience.”

Lack of funding for the project put Pulse on hold temporarily — but a $325,000 grant from the William Penn Foundation allowed the trolley line portion of the project to move forward. It’s not clear when the phases for the Broad Street and Market-Frankford lines (orange and blue mist, respectively) will open.

Echelmen and CCD president Paul Levy will be on-site when the first phase of Pulse opens in Dilworth Park on September 12th. They’ll hold a Q&A session around 7:30 p.m.