Pennsylvania’s attorney general called on Pope Francis to “direct church leaders” to drop their opposition to the release of a secret grand jury report. 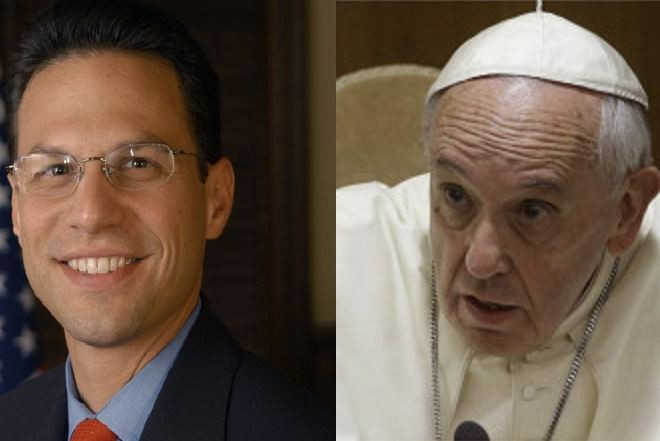 In an ongoing battle over a report alleging abuse at the hands of Catholic clergy in Pennsylvania, state attorney general Josh Shapiro is seeking divine intervention.

Media outlets have requested that the state unseal the extensive grand jury report, which Shapiro says details alleged sexual abuse of children and campaigns to cover up the abuse at six dioceses in the state. Unnamed petitioners have attempted to block the unsealing, saying that church officials named in the report should be able to challenge the findings before its release.

On Wednesday, the AG penned a letter to Pope Francis, pleading with him to direct those under his leadership to drop the anonymous campaign.

The letter opens with a recounting of a meeting between the pope and Shapiro, who at the time was chair of the Montgomery County Board of Commissioners, in September 2015 at St. Charles Borromeo Seminary, during the pope’s visit to the United States. On that same day, the pope met privately with abuse victims and expressed remorse over how they had been treated.

Shapiro then outlines the maneuvers underway to block the details of the report from the public eye, alleging that credible sources say at least two church leaders in the state are behind it.

“Anonymous petitioners implicated in the report went to court to stop me and silence the victims notwithstanding the fact that the bishops in Pennsylvania pledged publicly to not stand in the way of the truth,” said Shapiro, who is not Catholic himself. “Your Holiness, I respectfully request that you direct church leaders to follow the path you charted at the Seminary in 2015 and abandon their destructive effort to silence the survivors.”

The Philadelphia Inquirer and Pittsburgh Post-Gazette reported on Thursday that representatives from the archdioceses of Philadelphia, Harrisburg and Erie denied any involvement in the attempt to keep the report under seal. Officials from other dioceses failed to respond.

The Inquirer also reported that a spokesperson for Francis said it was too early for the pope to comment.

The grand jury report is based on more than two years of investigation; it reportedly names dozens of people from every Pennsylvania diocese besides Philadelphia and Altoona-Johnstown, which were themselves the subjects of earlier investigations.

“Please call on [those involved] to ‘follow the path of truth’ you laid out,” Shapiro ends his letter, “and permit the healing process to begin.”