The bittersweet performance included a guest appearance by District Attorney Larry Krasner and a live call to Sen. Pat Toomey's office. (No, he didn't answer.) 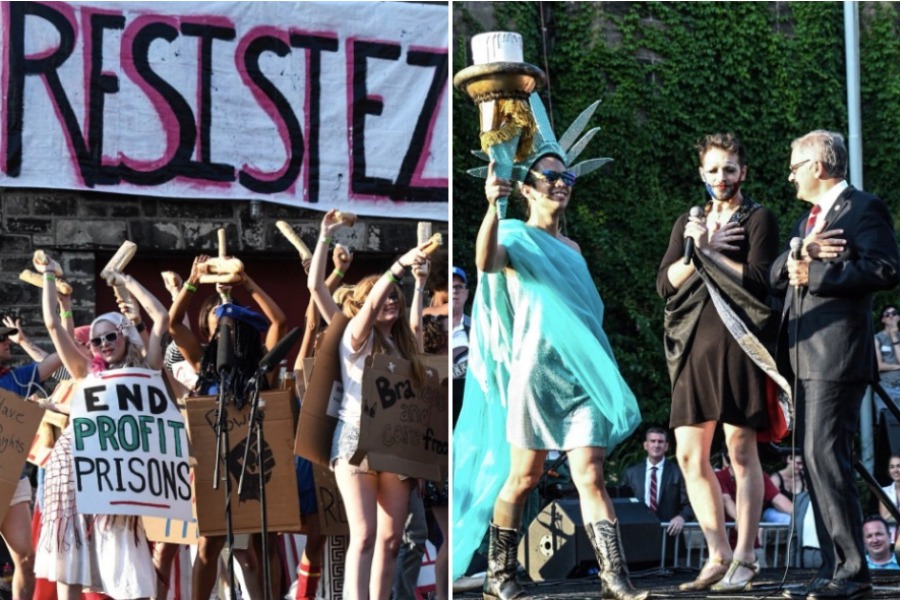 Photos via the Office of the City Representative/Twitter

Alas, all good things must come to an end — and Eastern State Penitentiary’s beloved Bastille Day event, which took over Fairmount Avenue one last time on Saturday evening, is no exception.

Hundreds of Philadelphians gathered outside the historic penitentiary at 2027 Fairmount Avenue around 5 p.m. on Saturday, many sporting blue berets and red silk scarves, for one final Bastille Day performance. Eastern State Penitentiary, which has held the event annually since 1995, announced last month that this will be its final year hosting the festival.

The very-Philly twist on the French holiday included, of course, a show by Philly drag performance group the Bearded Ladies — followed by the festival’s obligatory Tastykake-throwing finale.

But that wasn’t all. This year’s presentation also featured Philadelphia District Attorney Larry Krasner and a live phone call to the office of evasive Sen. Pat Toomey. (Sadly, no one answered — but the crowd left a message.)

It was a bittersweet occasion — and there were a few boos when organizers took up the mic to explain why it would be the penitentiary’s last.

In June, Eastern State Penitentiary said Bastille Day has grown “beyond its expectations,” and that it must reallocate its resources to see through its new mission statement, which includes more of an emphasis on fostering criminal justice reform.

“As sad as we are to see it go, Bastille Day is extremely resource-intensive, and we have a bold new vision for our organization that requires we make some tough sacrifices,” the organization said in a statement last month.

We’re hoping someone else takes over. In the meantime, let us bask in the glory of these final Bastille Day photos and videos, starting with a conclusory crowd-surfing performance by John Jarboe of the Bearded Ladies.

It's the final #BastilleDay at @easternstate. But @KnowYourBeards Edith Piaf is going out with a bang and a gold lamé suit! pic.twitter.com/b2roErrVis

Give love one more chance… #bastilledayphilly

@KnowYourBeards @easternstate Yesterday was my first #BastilleDay and I'm so sorry itll be my last!! It was a great day!! pic.twitter.com/e2wyspipoO

Really enjoyed seeing the final #bastilleday performance by The Bearded Ladies with @ramunyt today! Got to tour Eastern State Penitentiary, which is super interesting and really shines a light on the giant problems in our criminal justice system, which c… https://t.co/zJBIrP569R pic.twitter.com/hdq7DGHHT9