Mike Tyson at Borgata: He Loves to Talk About His Past — Except Rape
Subscribe
Follow
I'm a scraper
This search result is here to prevent scraping

The boxing superstar — and registered sex offender — waxed nostalgic at the Borgata on Saturday night for an adoring crowd of supporters and fans. 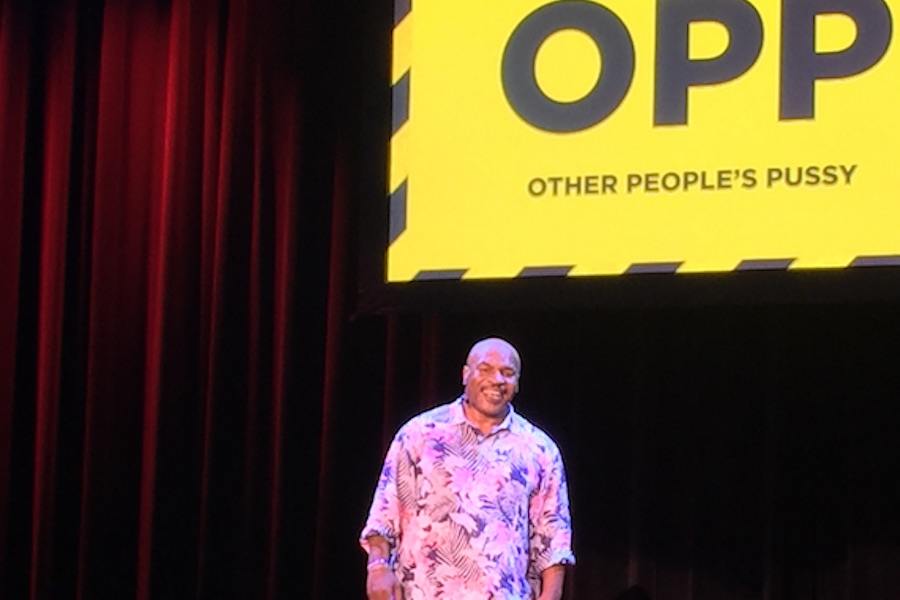 On Saturday night, close to 1,000 people turned out to the Borgata’s Music Box venue in Atlantic City for “Mike Tyson Undisputed Truth: Round Two,” the second installment of his one-man show he debuted in 2013 as a publicity tour for his written memoir, Mike Tyson: Undisputed Truth. You can currently find that book used on Amazon for 91 cents.

I never read it.

I also never saw the first iteration of the live show, which toured through dozens of cities a few years back.

And I also never saw the Spike Lee-directed 2013 HBO Mike Tyson: Undisputed Truth “documentary,” which, as the LA Times put it, appeared “to be more marketing ploy than personal or social excavation.”

I went to Saturday’s Borgata show — ticket prices were $59 and $79, and I was given a free ticket — sort of on a lark. I don’t really have any personal interest in Mike Tyson. I do enjoy boxing. And I remember the time my father reluctantly dropped a bunch of money to order the Mike Tyson vs. Michael Spinks fight on pay-per-view, only to see Tyson knock out and wipe the floor with Spinks in just 91 seconds. We never pay-per-viewed again.

As I was sitting there waiting for Tyson to start his one-man show, I remembered — OK, I admit it: Wikipedia reminded me as I sat in my seat — that Tyson had been convicted in 1992 of raping an 18-year-old beauty pageant contestant named Desiree Washington, back when Tyson was 25. And around the same time super-lawyer Alan Dershowitz was working to get OJ Simpson off for the murders of Nicole Brown Simpson and Ron Goldman, he appealed the jury’s verdict, that appeal was denied, and Tyson was sentenced to six years in prison. 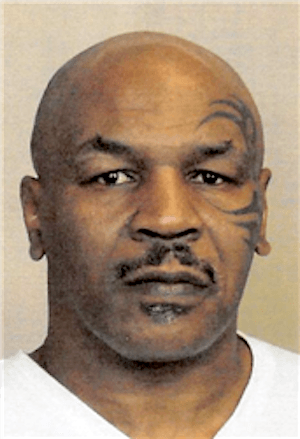 In fact, Tyson is, as a result of that conviction, a registered sex offender. This is Tyson’s January 2018 photo in the sex offender registry in Nevada. (Read this exhaustive Sports Illustrated account of the rape, which Tyson has always denied and the magazine described as “an evening of pain and terror.”)

So, as I sat there waiting for Tyson to walk out on stage, I thought that this could be a really interesting moment. After all, it’s 2018. I don’t need to list all the male celebrities who’ve been disgraced in the last year or so by allegations of rape, sexual assault, sexual harassment, and other forms of sexual misconduct. And here we were in a theater, awaiting one of the biggest living names in sports history, whose whole point in being there was to talk about his past.

How is he going to handle the rape? I wondered. Well, he handled it by simply ignoring it.

Throughout the shoddy production, which was mercifully short, Tyson talked about his life, fights, bankruptcy, and some of the colorful figures he’s encountered throughout his misspent time on this planet. His stories were “enhanced” by sound effects and video clips that had sound-synching issues.

The man who was once one of the most boastful and extravagant guys out there was, instead, entirely self deprecating, and the audience ate it up. He talked about his sciatica and his financial collapse. He joked about and showed clips of his unfortunate beret-wearing moments, the times when he was embarrassingly defeated in the ring, the whole ear-devouring incident, and a recent tennis match with his nine-year-old daughter, who outright owned him.

He was also downright offensive, as he began to unacceptably mock a variety of stereotypes. He recalled a time when the “Bushy Beavers Association,” as he put it, demanded that he apologize after he said that an opponent “cried like a woman.”

“So I said I was sorry,” Tyson told the crowd. “And then I said he cried like a bitch, instead.”

His fans — plenty of women among them — erupted in laughter.

There was also plenty of laughter when Tyson felt the need to mock the “big-lipped African” opponent. Then there was also the “Canadian piece of shit n****r.” Tyson further opined on the “n****rs of the 80s” who were “so greasy” with their “Jheri curls” and “all that Vaseline in their hair.”

The mostly white crowd seemed to enjoy the remarks.

Eventually, Tyson treated us to his mugshot from a 2006 DUI arrest. And it was then that I began thinking, OK, OK, now we’re getting into the legal stuff. But nope. He moved right on to another topic.

“How can he ignore it?” one female friend texted me after I sent her a message about three-quarters of the way through the show. “I just assumed that would be the meat of his story.”

I thought I was going to have to update her and explain that Tyson had finally “gone there” as he wrapped up the show with a segment all about his biggest regrets in his life. You know, things like raping an 18-year-old, going to prison for it, and having to check in with Nevada’s sex offender division each year.

But raping the 18-year-old apparently didn’t rank too high on the regrets list of the former knockout artist. (Tyson had a litany of other legal troubles as well, including 38 arrests before the age of 13, domestic abuse allegations from his former wife Robin Givens, and an accusation of sexual assault by, ironically, Bill Cosby’s daughter.)

One regret was something about not paying Frank Sinatra the proper respect when he met him way back when.

And the other was about Tyson’s visit to Michael Jackson at the fabled Neverland Ranch. “You go in those gates, and you’re never the same,” Tyson joked. “There were just kids everywhere. He even had a kid chef.” Tyson said his big Michael Jackson regret was that he declined to smoke a joint with Jackson at the ranch.

And then the show was over. The audience gave Tyson, convicted rapist and registered sex offender, a standing ovation and then went on their merry way.