Brady: I’ll Propose a Bill to Help Immigrant Family in Sanctuary in Philly

The congressman said he doubts the measure would actually pass — but hopes it will send a message to ICE nonetheless. 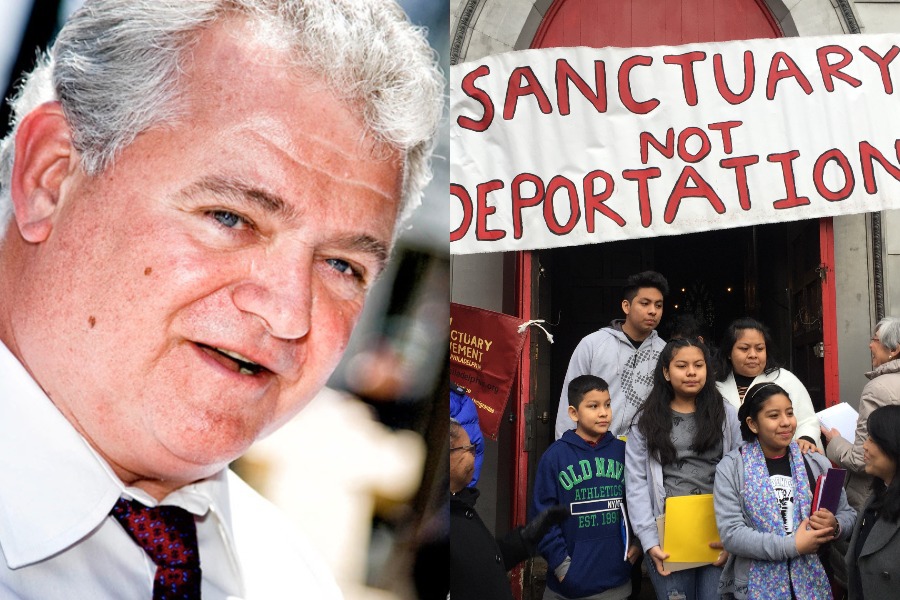 L: Congressman Bob Brady | R: Carmela Hernandez and her four children on the steps of the Church of the Advocate

On Monday, U.S. Rep. Bob Brady was among the officials who joined the fight to support Carmela Hernandez, an undocumented immigrant mother currently in sanctuary with her four children in a North Philly church.

Speaking during a gathering at the Church of the Advocate (where 36-year-old Hernandez and her children have lived since December), Brady said he plans to introduce a private bill that would pave the way to citizenship for Hernandez and her kids. The bill would function as stand-alone legislation that would apply only to the family.

Carmella Hernandez is a Mexican immigrant who is fleeing awful violence. She is living in sanctuary at the Church of the Advocate with her four children. Today, I announced that I will introduce a Private Bill asking for Permanent Resident status for the family. #CarmelaLibre

The longtime Philly congressman did admit that the bill would be “tough to pass,” according to the Inquirer. Still, he reportedly hopes it will garner at least 200 signatures and “get the attention” of Federal Immigrations and Custom Enforcement.

Hernandez is certainly already on ICE’s radar. In late January, she made a public decision to send her children — 15-year-old Fidel, 13-year-old Keyri, 11-year-old Yoselin, and 9-year-old Edwin — to Philly schools. In doing so, she sent a clear message to ICE: Her children deserve access to an education, regardless of their immigration status. The nonprofit New Sanctuary Movement, the Philadelphia Federation of Teachers Union, City Councilwoman Helen Gym and state Rep. Chris Rabb helped escort the kids to school.

ICE has said in a statement that “in an exercise of discretion, [the agency] has allowed Ms. Hernandez to remain free from custody while finalizing her departure plans” in accordance with a federal immigration judge’s decision.

On Monday, Brady joined City Council President Darrell Clarke to call for support for Hernandez and let ICE know that “this lady is not fighting by herself,” per Brady.

At @NSMPhilly presser for #CarmelaHernandez who took sanctuary in church to escape deportation, more on @KYWNewsradio re what action US Cong Bob Brady is taking to get ICE attention and what teachers are doing to protect undocumented students pic.twitter.com/YkySKxk2xw

Hernandez told the Inquirer in December that she and her children came to the country in August 2015, after organized drug criminals murdered her brother and two nephews, then threatened and assaulted her and her oldest daughter. Her request for asylum in the U.S. was denied, and she was ordered to leave the country by December 15, 2017. Around that time, she chose to seek sanctuary in the Church of the Advocate.

ICE guidelines maintain that arrests cannot be made in “sensitive locations” like schools, places of worship, healthcare facilities or public demonstrations. However, ICE can target immigrants directly outside these places, and exceptions can be made if officers obtain prior approval from supervisors or if other law enforcement actions have led officers to the location.

ICE has said that it “does not speculate on pending or proposed enforcement actions” regarding Hernandez but that the organization’s “sensitive location policy remains in effect.”