Bucks County Brewery Honors Jason Kelce With His Own Beer

“No One Likes Us, We Don’t Care” IPA should be a big hit at the tailgate lots. 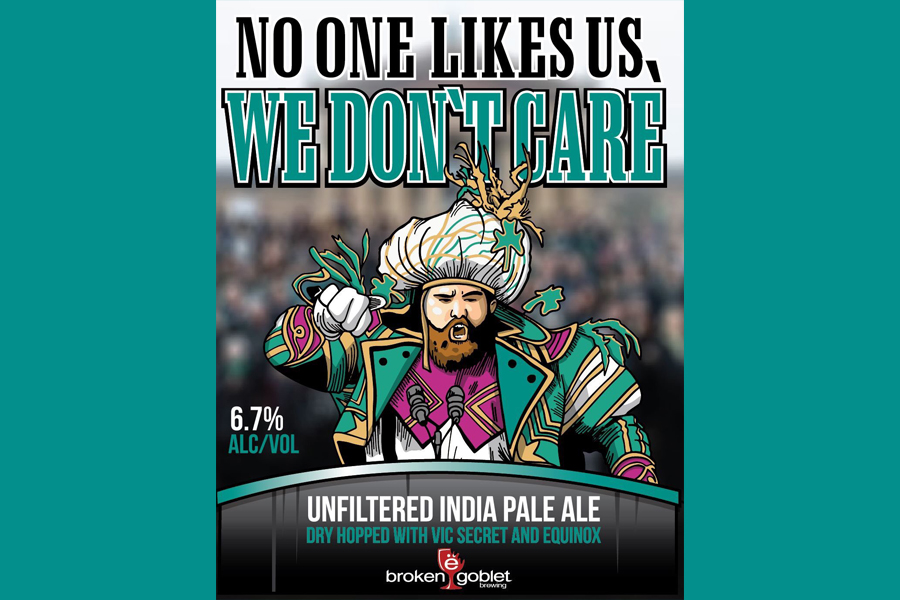 Well it didn’t take long, but we finally have a beer commemorating Jason Kelce’s epic Super Bowl parade pump-up speech thanks to one local brewery out in the ‘burbs.

Inspired by the Mummed-out Eagles center’s profane rant atop the Rocky Steps, the folks over at Broken Goblet Brewing in Bristol bring you “No One Likes Us, We Don’t Care” IPA. The beer makes its glorious debut on March 10th, but it’s only available at the Bucks County brewery on draft and in 32-ounce mega cans for $15 each.

The owners of Broken Goblet were wary of using Kelce’s likeness without his permission, which the All-Pro lineman happily gave on one condition: A portion of the proceeds should go to charity. With Kelce’s blessing, 10 percent of the brewery’s profit from “No One Likes Us, We Don’t Care” IPA will be donated to former Eagle Connor Barwin’s Make the World Better Foundation.

Continued sale of the dry-hopped brew (6.7 percent ABV) depends upon whether Broken Goblet can acquire the blend of ingredients needed to make another batch. If not, brewery owner Mike LaCouture hopes to at least bring back his latest creation for football season so Birds fans can chug like their hero in the tailgate lots.

Jason Kelce is the leader in the clubhouse for parade MVP pic.twitter.com/Ga6Wb6YjKg