Chase’s timely f-bomb was great in ’08, but Kelce’s victory speech transcends it in every way. 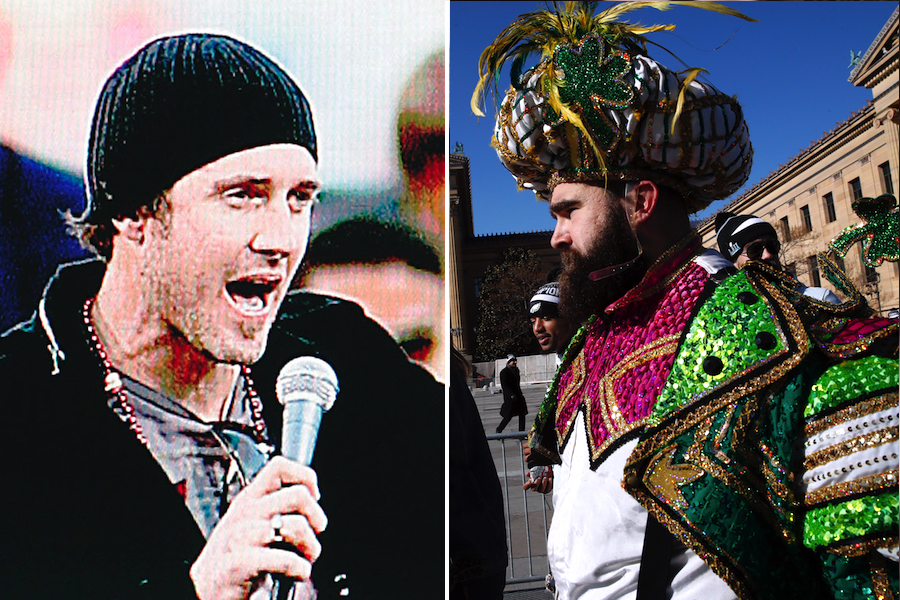 I’ve met Jason Kelce before. I’m sure many of you have, whether it was out at a restaurant in Center City one night or on a summer day down the Shore. The Eagles center is truly a man of the people. He has been ever since he first arrived in Philadelphia as a thoroughly unheralded sixth-round pick in 2011.

Most athletes – no matter how long their tenure – view the cities that they play in as just a temporary home, which is understandable given the uncertainty of the business. However, we here in Philly hold a special place in our hearts for the sports stars that become truly immersed in our culture, and there might not be an athlete that has ever gotten this town quite like Kelce does. He may have Ohio on his birth certificate, but Jason Kelce is as authentic a Philadelphian as ever there was.

That’s what makes his victory speech atop the Rocky steps on Thursday so memorable – he spoke from the heart and sounded just like one of us. Because he is us.

Donning full-on Mummers regalia didn’t hurt either, but it was the passion with which Kelce spoke that set Philadelphia (and the sporting world) ablaze.

I couldn’t help but be reminded of Chase Utley’s then-epic f-bomb in 2008. And I never thought that anybody would top that moment in Philly sports lore until I heard Kelce talk about hungry dogs yesterday.

Utley only said the word. Kelce used it as a vehicle to perfectly sum up the gruff underdog spirit of the city he proudly calls home. Is there anything more Philly than dropping a well-placed fuck you?

And can we talk about this chant for a second:

Jason Kelce is enjoying himself at the Eagles' Super Bowl parade. pic.twitter.com/CaREx3qSve

I’ve seen a few people question its origin after the Eagles parade, but I’ve been hearing bars of “We’re from Philly…” at games for years. The fact that this little-known jingle — a deep cut, for sure — went so far as to get back to Kelce just shows you how invested he is in Philadelphia.

I can remember plenty of people joking that Utley should run for mayor after he uttered his famous line, but where is Chase now? Somewhere on a beach in southern California, probably. His moment in time was ten years ago.

Where do you think we’ll find Kelce in ten years? I’d put money on McGillin’s, the OD, or any of a number of Philly haunts.

Just don’t be surprised if he does end up in a corner office at City Hall. Of course, maybe we shouldn’t wish that on him.