Mayor Kenney Might Be Philly’s Most Superstitious Eagles Fan

Salt, horseshoes, and sage-cleansing — our mayor isn't jinxing anything. 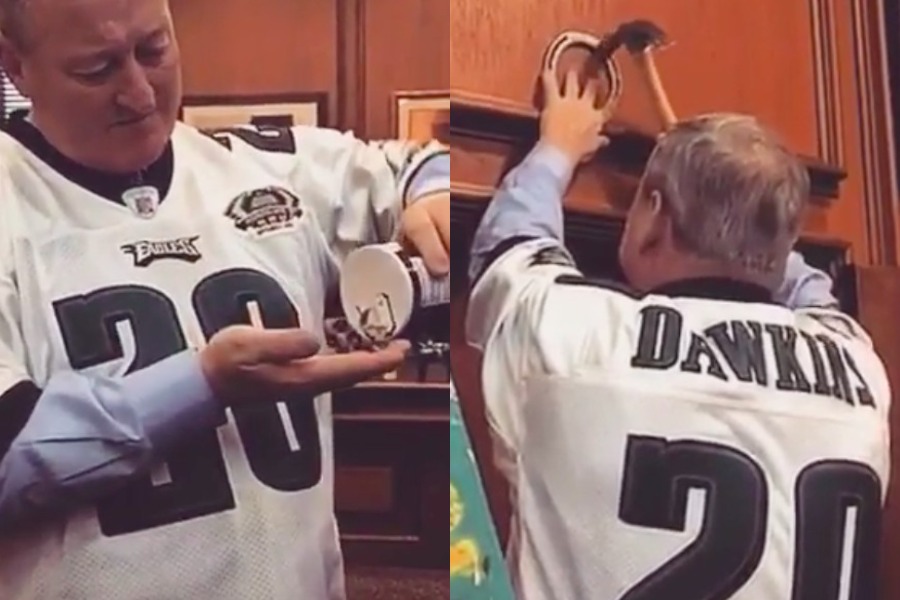 Eagles fans are superstitious. We refuse to take off lucky underwear for weeks. We cover weird scarecrows in Eagles garb and leave them outside our houses. And we eat way too much green stuff.

But our mayor is quite possibly the most superstitious of all. At a time when he could be pumping up Philadelphians by bragging about our teams successes and predicting a Super Bowl win in an effort to rally the troops, he’s chosen to remain fairly modest. Why? Because he doesn’t want to jinx anything!

In case you missed it, Mayor Jim Kenney said there is “absolutely no way an Eagles jersey is going on Billy Penn.” (So please stop asking him.) This shouldn’t come as a surprise: Before the NFC title game earlier this month, he refused to make a bet with the mayor of Minneapolis.

If you need a little more insight into how apprehensive our mayor is ahead of the Super Bowl, here’s a video he released today – featuring salt, ladders, horseshoes, and sage cleansing:

The mayor explains his decision re: Billy Penn in the short clip.

Now I know what you might be thinking: Kenney just made a bet with Brockton, Massachusetts, mayor Bill Carpenter! The losing team’s Rocky statue (Brockton keeps a statue of boxer Rocky Marciano) will have to wear the winning team’s jersey!

This is true. And scary. We’ll just have to hope for the best and pray Kenney’s other superstitions carry us through.

The “Rocky v. Rocky” Super Bowl wager is on w/ @PhillyMayor Jim Kenney. The losing Rocky will wear the team garb of the #SuperBowlLII Champs! Mayor Kenney will also put up a keg of “Yards” beer against our Rocky Marciano wine. @stevedamish_ENT @Patriots @JoshBrogadirTV pic.twitter.com/XbbGsHCOPQ

In the meantime, no parade planning. And no win-predicting.

No plans right now for a parade – we don't want to jinx it! Our planning right now is focused on public safety surrounding Sunday’s game. #FlyEaglesFly #AskKenney https://t.co/oZZyeJGtTl

How badly are we going to beat the Patriots on Sunday? #FlyEaglesFly