From beer to bagels to kombucha, Philly is living, breathing, and eating Eagles green this week. 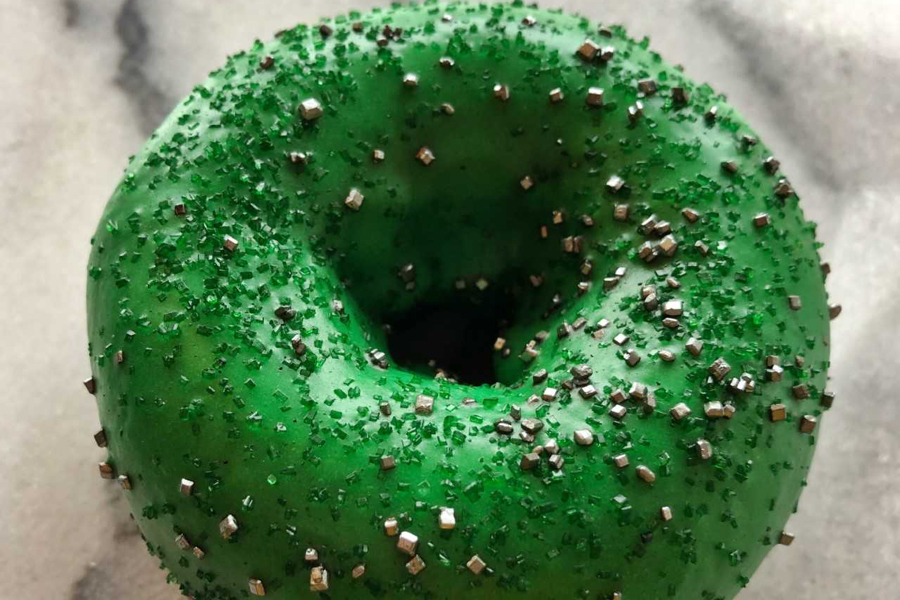 Philly is humming with Super Bowl anticipation — and that includes the city’s chefs and bartenders, who are paying tribute to the Birds with green-tinted dishes and drinks this week. To make sure that the Eagles win (and that you max out your RDA of Yellow 5 and Blue Lake food dye), be sure to eat green through Sunday. Here are some of our favorite Eagles-colored specials on offer in Philly leading up to the big game. 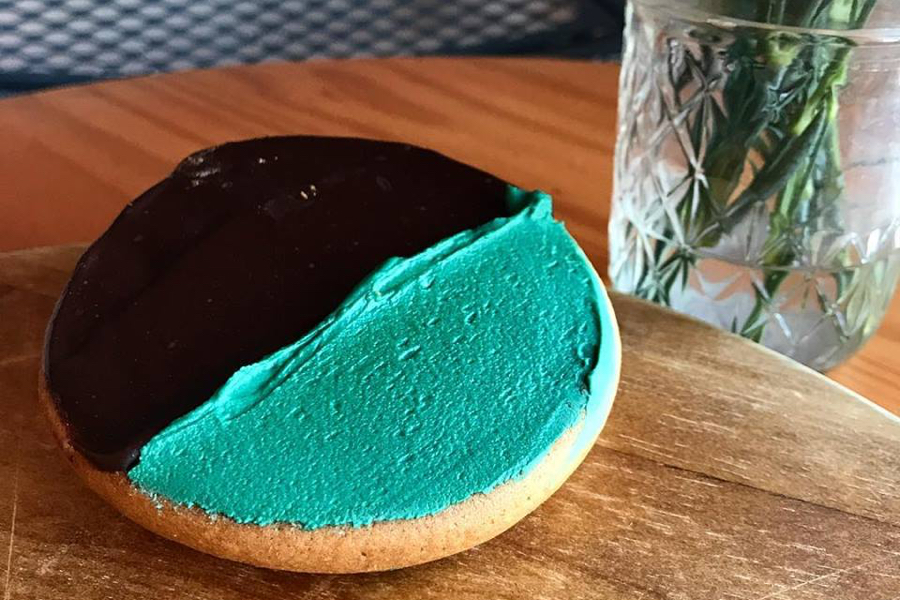 Black and Green Cookies at Essen Bakery
Baker-owner Tova du Plessis is serving up an Eagles-colored version of the traditional frosted cookie this week.

The Underdog at Fox & Son
Reading Terminal Market’s corndog and cheese curd destination is serving up an Eagles-inspired ‘dog — a turkey sausage spiked with broccoli rabe and dipped in an herbed green batter with scrapple mustard on the side — through Sunday.

The Iggletini and Green Beer at McGillin’s Old Ale House
The country’s oldest continually operating tavern has broken tradition and served green beer outside of St. Patrick’s Day for the first time during the championship game that sent the Eagles to the Super Bowl. That and their neon-green Iggletini — a blend of vanilla vodka, creme de menthe, and half and half — will be available this Sunday, too. 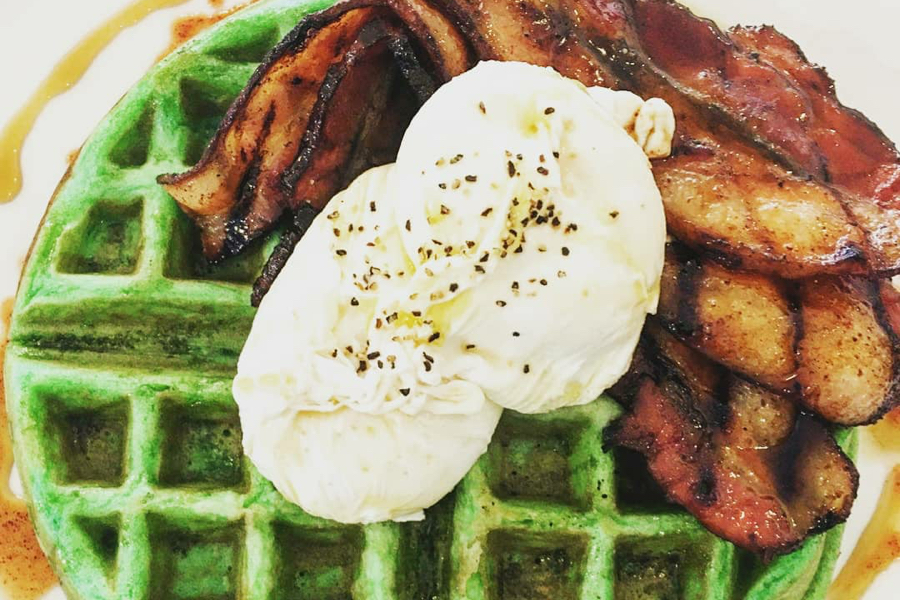 Green Waffles at On Point Bistro
Wake up green with this special — a green-tinged buttermilk waffle served with honey rum bacon, poached eggs, and maple syrup — at the Point Breeze spot.

Highway Manor Brewing’s The Underdog Sour Saison at Tria Taproom
This brew is perfect for the craft beer snob-slash-Eagles fan: green in color and double dry-hopped with Lemon Drop hops, it’s one of Tria Taproom’s “underdog” beers. They’re discounting it in their new 32-ounce Crowler cans starting this Thursday and going through Sunday afternoon. 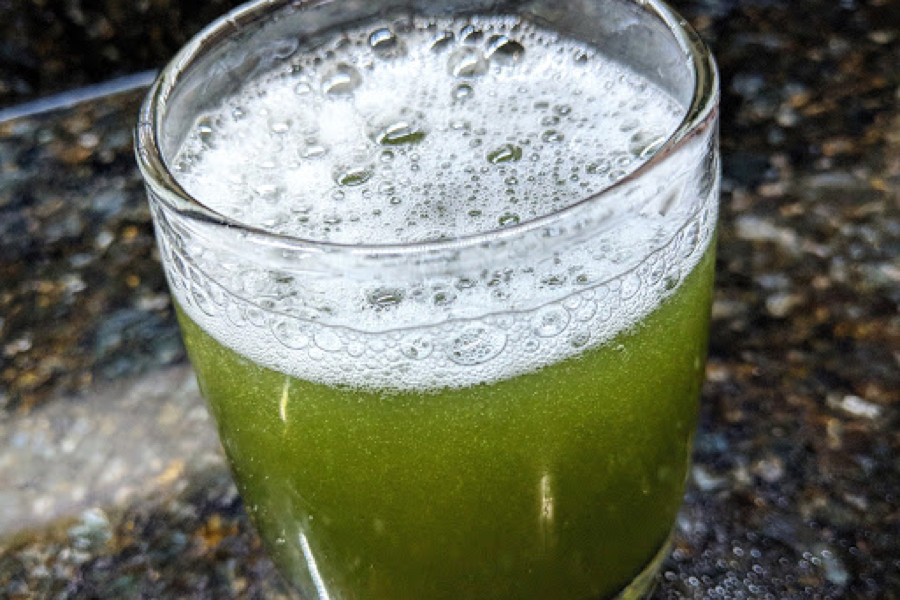 Green Kombucha by Baba’s Brew at various locations
Kombucha mistress Olga Sorzano is making Fly Eagles Fly, her green booch infused with juniper berries, lemongrass, lemon verbena, ginger, and chlorophyll, this week. You can get it on draft at Front Street Cafe in Kensington, P.S. & Co. in Rittenhouse, Saxby’s at 18th and Chestnut, and Weaver’s Way Co-op in Mount Airy and Ambler. 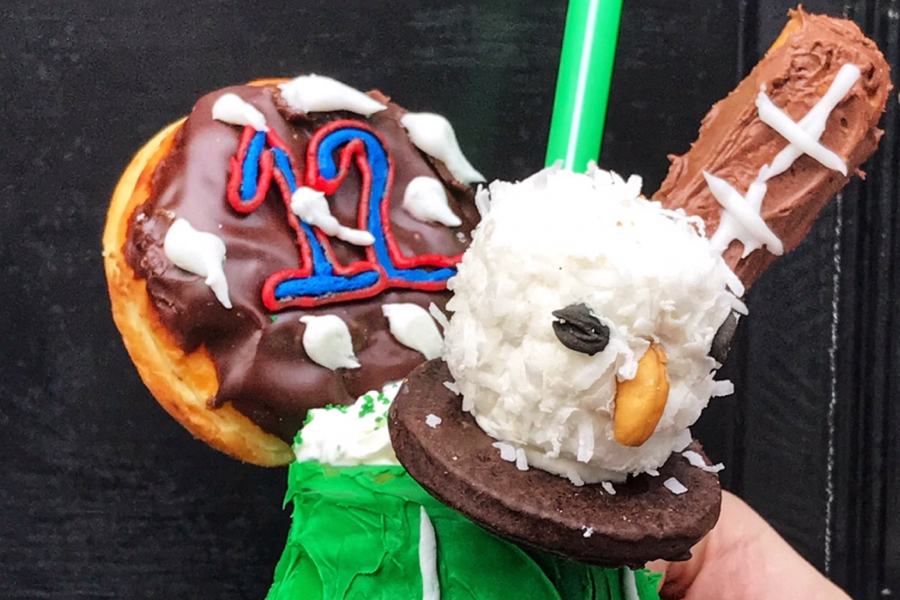 Eagles Super Bowl Milkshake at Craftsman Row Saloon
They’re saluting the Birds through Sunday with a green vanilla milkshake that’s garnished with some serious sweets in the shape of Philly’s favorite bird: a chocolate-covered Amish pretzel stick, a white chocolate and coconut flake-covered marshmallow, a cashew “beak,” a peppermint patty, and a Boston cream donut (controversial!). Quantities are limited, so order early. 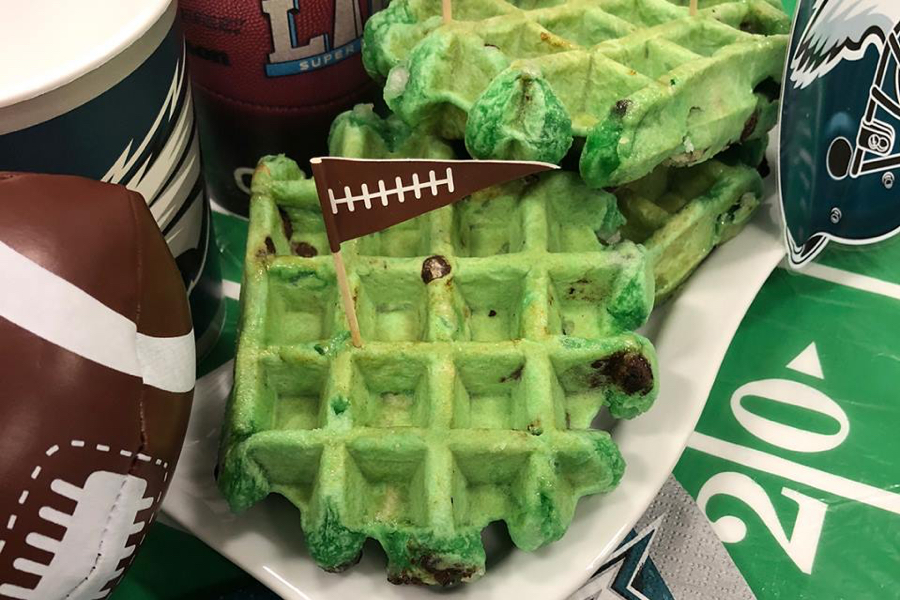 Super Bowl Waffles from Waffatopia
Order up a stash of mint-chip liège waffles from the Conshohocken-based online bakery for your Super Bowl party.

Green Lemonade Fun Bags at Garage Fishtown
These adult juice pouches of vodka and lemon-limeade will be available during Sunday’s game for those who wish that Capri Suns could get you drunk. 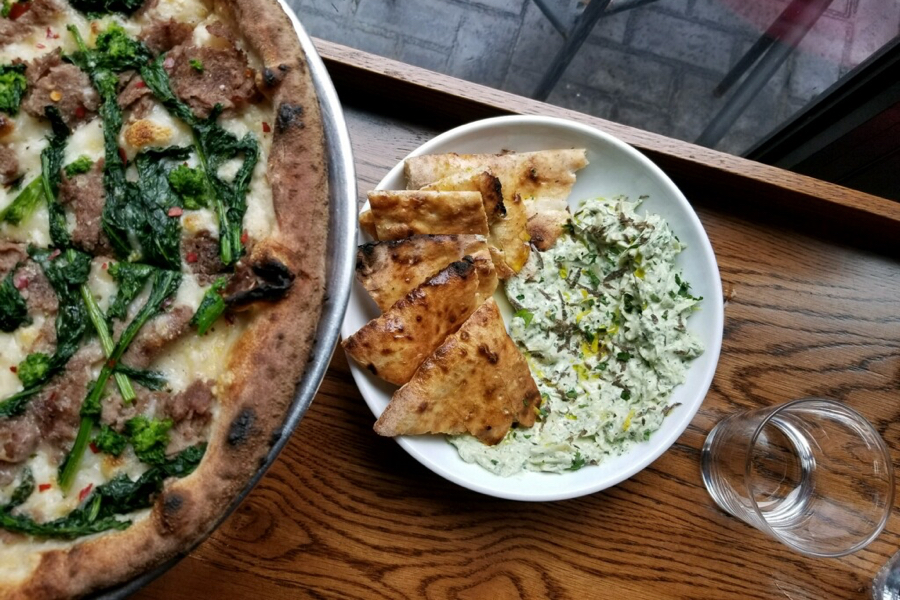 The Iggle Donut at Federal Donuts
This fancy, available at all four Philly FedNuts shops through at least Sunday, is topped with Kelly green glaze and a sprinkle of green and silver sugar. Proceeds from each one sold will be donated to The Fund For the School District of Philadelphia. 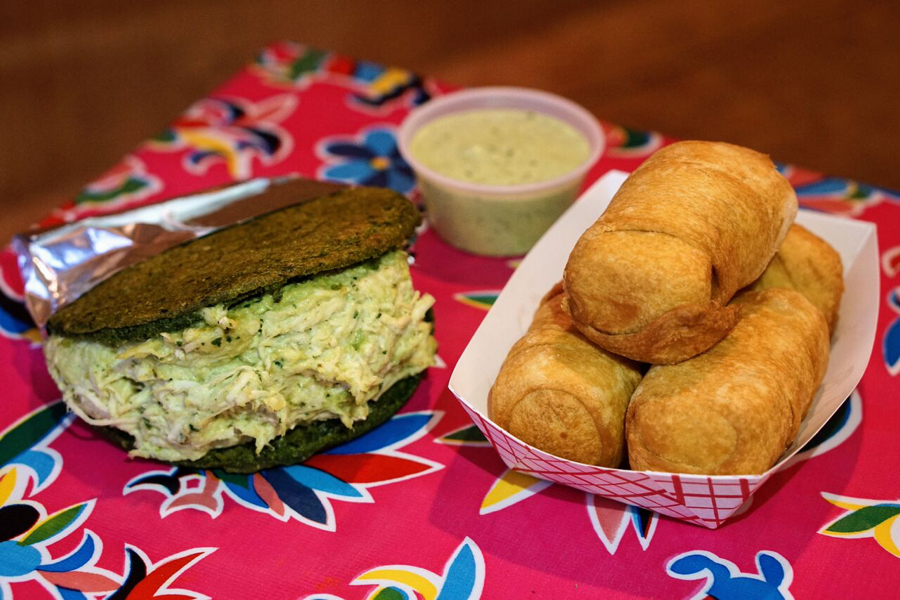 The Green Queen at Puyero
The Venezuelan street food spot has developed the Green Queen — a spinach-cilantro arepa stuffed with shredded chicken mixed with avocado and Gouda — in honor of the Eagles’ impending Super Bowl victory.

Avocado Lime Sorbet at Weckerly’s Ice Cream
Get this rich, creamy, and green sorbet by the scoop or pint at their Fishtown storefront this week, or try it in their Super Bowl Sundae, made with waffle cone “chips” to resemble nachos. Pre-order your sundae by midnight on Friday for pickup this weekend. 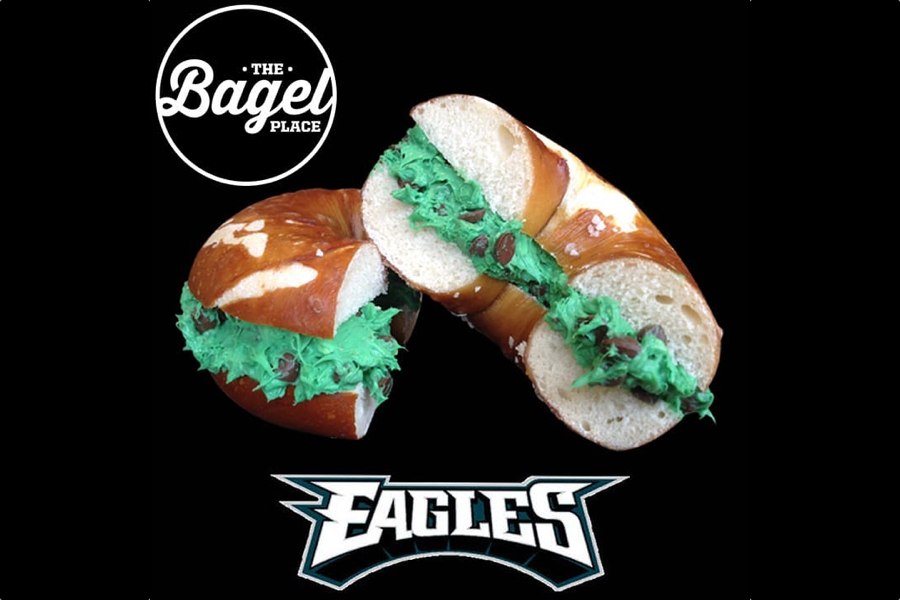 Chocolate Chip Mint Cream Cheese at The Bagel Place
Get this vivid green schmear spiked with chocolate and mint on one of their pretzel bagels for maximum Philly-ness.

Green Cheesesteak Empanadas at Jezabel’s Cafe
Jezabel Careaga and her crew are working on a special empanada for Super Bowl Sunday, made with green dough and stuffed with cheesesteak filling. 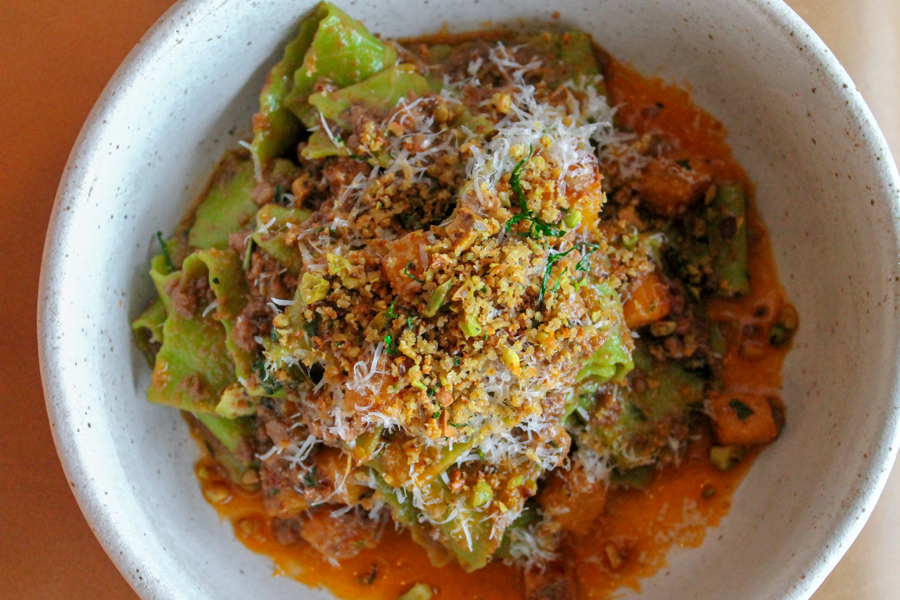