The Eagles Underdog Mask Is Now an Amazon Best Seller

You might want to try to cop one before the game against the Vikings on Sunday. 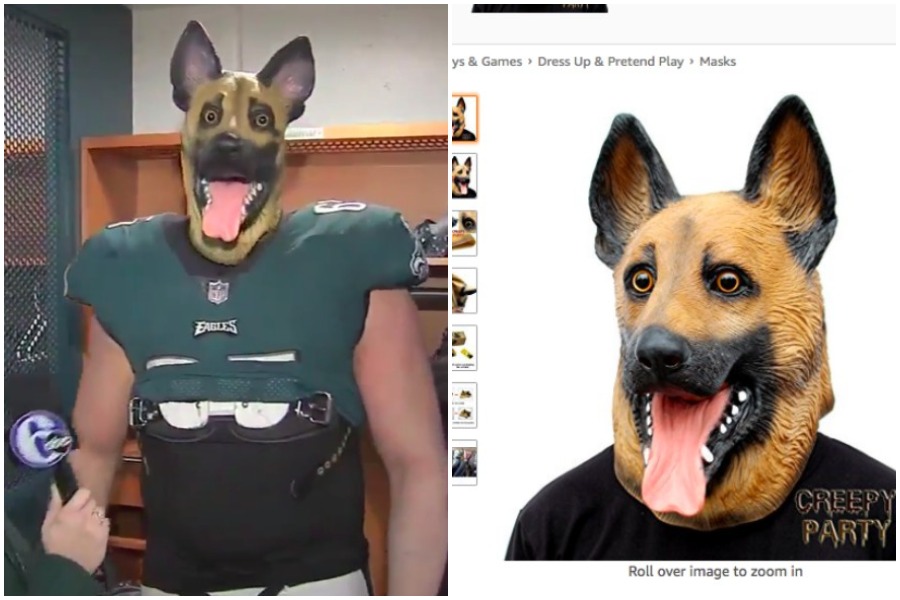 Eagles fans are giving Amazon a whooole lotta business after the 15-10 win over the Atlanta Falcons on Saturday.

ICYMI, players Chris Long and Lane Johnson wore German Shepherd masks after the game in defiance of the team’s “underdog” playoff status, despite being the NFC’s No. 1 seed … which probably explains why the “Novelty Halloween Party Latex Animal Dog Head Mask German Shepherd” is now an Amazon best seller.

The mask is available through Amazon vendor CreepyParty (how appropriate) for a steep price of $39.99. That’s roughly quadruple what Long and Johnson paid for it when they ordering through a different vendor, which is now sold out.

Unfortunately, it’ll be tough to cop a mask before the Eagles face the Minnesota Vikings on Sunday: the CreepyParty product apparently won’t arrive ’til the 22nd at earliest, per Amazon. We suggest trying a different dog mask.

Either way, you’ll be relieved to know the Linc will (eagerly) allow masks this weekend. Expect plenty of German Shepherds at the game.

Doggone it, you better believe dog masks will be allowed at @LFFStadium this weekend. Just make sure to take them off when you go through security.#FlyEaglesFly pic.twitter.com/0REb840ME7

When you sell creepy dog masks and your sales just increased 10000% in 24 hours. pic.twitter.com/lLittsoeHy

Bought this German shepherd mask for my son last Halloween – what should I tell Pamela??? pic.twitter.com/GPphETdn5u

Can I bring Nala? pic.twitter.com/d1ycaYR0SS

Where can I get myself a dog mask?