Cow Escapes Old City Nativity Scene Twice, Makes a Run for It on I-95

We've rounded up some of the best photos and videos of Stormy the cow's escapades. 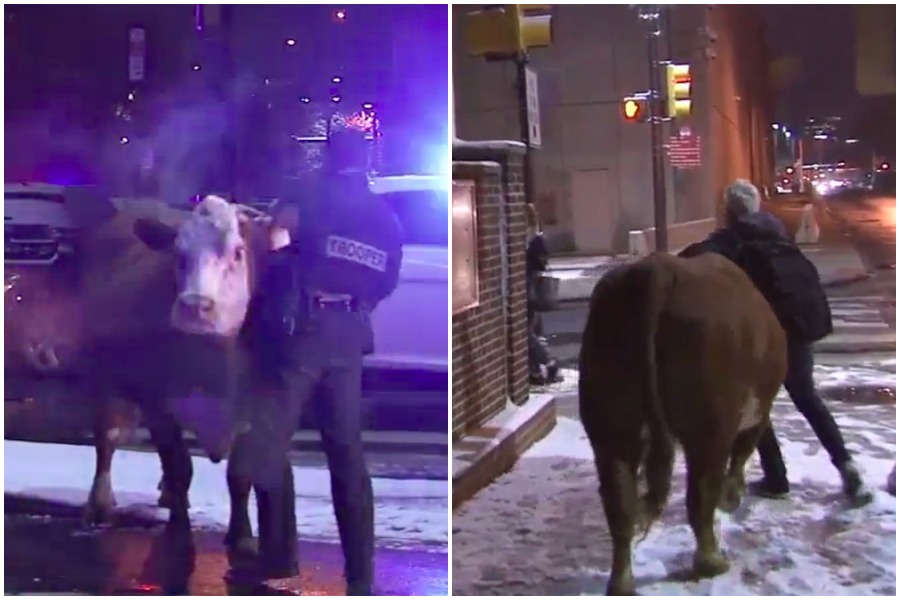 Forget Rudolph – Stormy the cow is going down in history.

This morning, Stormy, a brown and white bovine belonging to Old First Reformed United Church of Christ in Old City, broke free from a nativity scene and made a run for it on I-95.

She first escaped around 2 a.m., and shortly after, police found her wandering on I-95 southbound, near Callowhill Street, in Northern Liberties.

'STORMY' THE COW CORRALLED: @PhillyPolice corralled a cow that got loose on I-95 in Northern Liberties after leaving a nativity scene at a local church https://t.co/02LSP484N2 pic.twitter.com/46EKSieZ67

Officials were able to corral the cow and return her to the nativity scene pen, a display that dates back to 1973, per 6ABC.

But because one adventure wasn’t enough for Stormy, she escaped again around 6:15 a.m. this morning. Church pastor Michael Caine tried his best to stop her on her way out but was unsuccessful, per footage via 6ABC.

This time, police eventually found Stormy and Caine on the upper floor of a parking garage near the church. They were able to bring her home once again.

Storming the cow is now on an upper floor of a parking garage at 4th and Arch after her second escape from a live nativity scene within hours. pic.twitter.com/4gvwXTL3Y7

Can't make this stuff up. Cow breaks out of Live Nativity for 2nd Time. Hey Joe…did you lock gate?
I thought you locked the gate?? Stormy the Cow back at the Manger! pic.twitter.com/sAlRdqjzYV

6ABC recorded Stormy safe at the nativity scene between her escapades, appearing either extremely unhappy or deep in thought, as if assessing where she went wrong and planning her next breakout.

We hope you find peace, Stormy.

Stormy is a 7.5 yr old Hereford from Manatawna Farm in Roxborough. She's around 1500 lbs and has been in 4H shows. pic.twitter.com/DNuz8kMyPw

If you're in the area of 4th and Market, beware of traffic delays. A cow is loose. Again. No, we can't believe we're tweeting this either. pic.twitter.com/3FW6iHzQws

You know, you start your day saying "well, being a cop is a tough job, but at least I won't have to catch a cow today." But, it wouldn't you know it? You're wrangling a bovine. Then you say, "Well, at least I'll never have to do that again…." pic.twitter.com/EY5K5FkgVd

Cows have momentum and it's unlikely they can be contained.