A spokesman for the Attorney General said Khalif showed "unacceptable and threatening behavior." 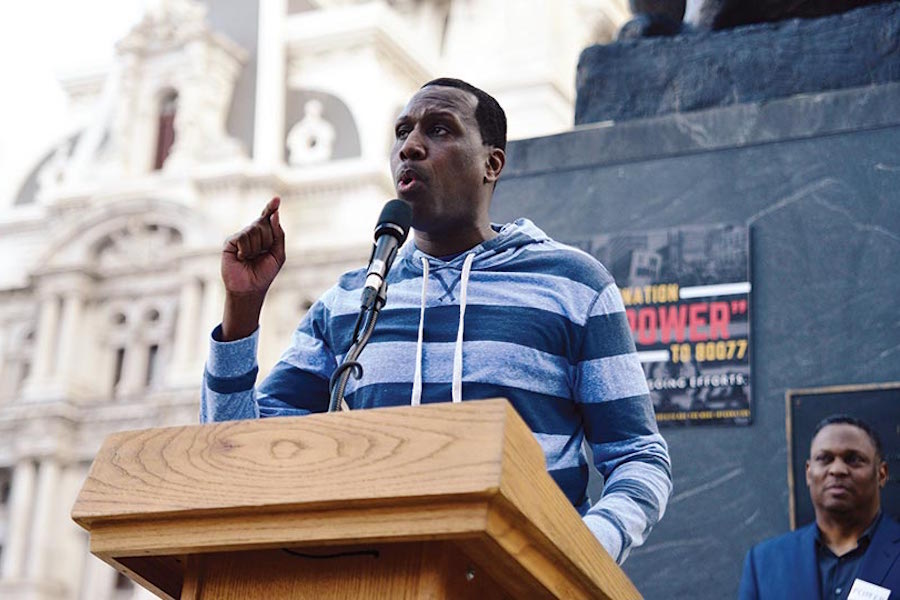 Asa Khalif is seen here speaking at the Rally for Racial Justice at Thomas Paine Plaza on April 4, 2017. | Photo by Associated Press

The most prominent Black Lives Matter activist in Philadelphia was arrested on Monday.

Officials said Asa Khalif, leader of Black Lives Matter Movement Pennsylvania, was taken into custody at Attorney General Josh Shapiro’s office in Center City and arrested. According to various news reports, Khalif went there to participate in a protest and demand information on the status of Shapiro’s investigation into the killing of David Jones, an African-American man who was fatally shot by a police officer in June.

Joe Grace, a spokesperson for Shapiro, said in a statement that Khalif showed “unacceptable and threatening behavior,” “cursed repeatedly” and “pushed out a window panel of a security card access door.” Grace also said he “and several others were demanding an immediate meeting regarding an open criminal investigation.”

“The Attorney General strongly supports and protects the right to protest,” said Grace. “Those protests cross a line, however, when property is destroyed and individuals engage in threatening behavior.”

Officials did not immediately say what Khalif would be charged with.

Defense attorney Michael Coard is representing Khalif. “I’ve organized a Dream Team of at least eight A-List lawyers who will join me in representing him pro bono,” he said. “We’re doing it because the law ain’t shit without justice.” (Full disclosure: Coard is an occasional Philadelphia magazine contributor.)

Shapiro recently spoke at Philadelphia magazine’s ThinkFest. According to attendants, Khalif jumped onstage after the event and talked with Shapiro for a short period of time.

Khalif was on the magazine’s 100 Most Influential People in Philadelphia list. He has led several high-profile protests of police shootings in the city, including one outside of home of Ryan Pownall, the officer who shot Jones. Pownall has since been fired. Khalif has also called for the removal of the Frank Rizzo statue outside of the Municipal Services Building and endorsed District Attorney-elect Larry Krasner earlier this year.

This is a developing story. Check back later for more information.