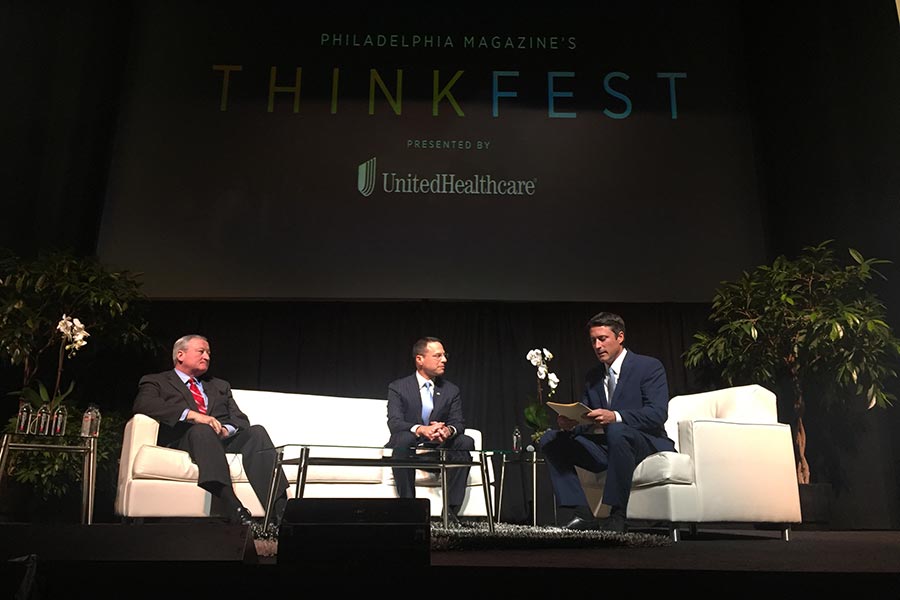 Mayor Jim Kenney and Pennsylvania Attorney General Josh Shapiro discussed Philly and America in the age of Trump – among other things – at Philly Mag’s annual ThinkFest on Thursday.

Here’s what Kenney and Shapiro had to say.

On the opioid crisis:

“You also have to understand that 80 percent of heroin users start with a legal prescription drug. So if you really want to look at the supply chain, look at the pharmaceutical companies. Look at the way they dump these drugs into our cities and into rural Pennsylvania.”

“We are studying them. We have a group going to Vancouver next week to look what they have. It certainly is controversial. If you want to [open a safe injection site], where you have it is the big fight. It’s a very radical idea, and people have really strong opinions about it.”

On guns and mental health in America:

“We have got to get serious about mental illness and the stigma that exists around treating it. And the president, in his last budget, cut funding for mental health treatment.”

“The president is flat out wrong when he dismisses the idea that guns aren’t the problem. I believe we have to have more background checks and more resources around guns in our community. We’ve got to understand why people pick up a gun in the first place. We have to have common sense legislation that will deal with gun violence.”

“The Second Amendment was written a long time ago.”

“If you look at guns and you look at opioids, it all comes down to greed. Pharmaceutical companies are greedy. People that make guns are greedy, and they don’t want to stop selling guns.”

“I like the Clintons. I think sometimes you stay around too long. And people get tired of what you’re saying. I think [U.S. Sen. Bernie Sanders] had a right to run and a good message. And I think what happened in the end is Bernie people were angry and didn’t come out. I said to [Clinton] once [when she came to Philly], ‘What are you doing here, why are you here? We all love you here. Go to Ohio. Go to Pittsburgh. You don’t have to do another rally at Independence Hall.'”

On Joe Biden running for president:

On the fight for the second Amazon headquarters:

“I think it’s kind of strange that we are a state that sells, promotes and taxes alcohol in a state store system, and we won’t consider recreational marijuana. It’s hard because you don’t want to act like you’re trying to get people to use it, but if you’re going to sell it in a closed system – if you could have it grown and harvested in Pennsylvania and sell it and tax it – I don’t see why we shouldn’t look at it.”

“The ‘T’ word is a profane word in Pennsylvania. [State legislators will] expand gaming to daycares, but they won’t raise taxes. You need to raise revenue. Between education and infrastructure, the state is falling apart. That’s why marijuana is discussed.”

On the Eagles winning the Super Bowl:

“I’m not jinxing anything.”