The Special Victims Unit is investigating this latest incident on the popular running trail. 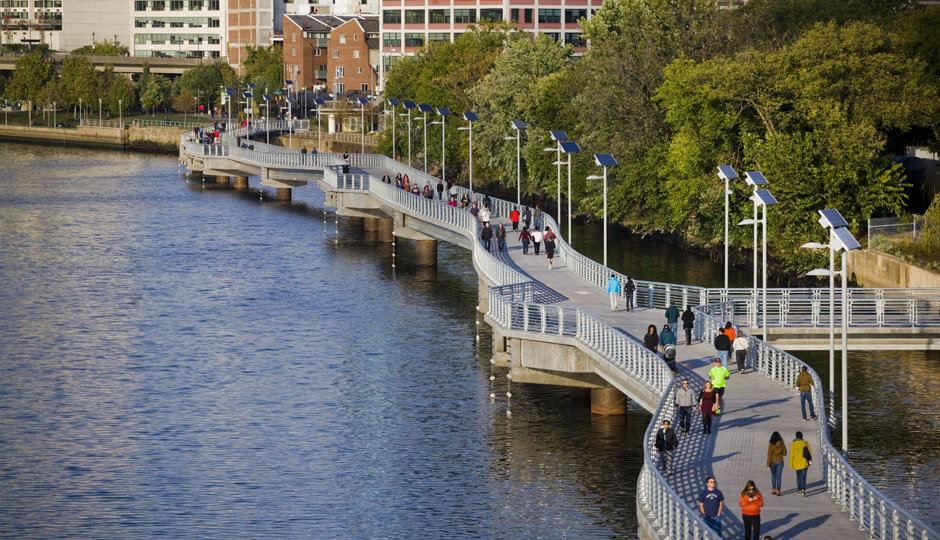 A South Philadelphia woman says she was attacked by a group of teens on the Schuylkill River Trail on Tuesday night — and that none of the many people who passed by stopped to help.

The 43-year-old woman, who asked us to protect her identity, says the incident happened around 5:45 p.m. as she was jogging on the Boardwalk portion of the popular running route between the Schuylkill River Park trailhead and the South Street Bridge.

According to the woman, a group of five or six teens on mountain bikes surrounded her and one of them groped her.

“He grabbed my ass and looked me dead in the eye and started laughing,” she told Philly Mag on Wednesday morning. “The others started yelling at me and laughing. Then one came from behind and swerved around me and said, ‘I guess you didn’t see me, bitch.’”

She says that the group rode off but later came back to continue their harassment, and that none of the people passing by interceded. It wasn’t until she started screaming that a couple of people stopped to ask if she was OK, but by this point, the teens had already fled, she recounts. And she says that she’s definitely seen the same group on the trail before Tuesday, several times.

“I was born and raised in Germantown and I am not afraid of the Philadelphia streets,” she explains. “But here you have boys who have more power and space in our society and in our community than women. They think they can act with impunity and women just have to be like, Oh, boys will be boys? This is really violating and upsetting, being diminished by children when you’re just minding your own business.”

She originally reported the incident to the 17th Police District, where she lives, and was transported to Special Victims Unit, where she provided a statement to a detective, describing the group as black males around 13 or 14 years old. The Philadelphia Police Department confirms that it’s investigating.

This isn’t the first time that a runner has reported being attacked on the trail. Far from it. But Philly running advocate and RUN215 founder Jon Lyons, who had spearheaded a community-based town watch-style group to patrol the route, says he believes that the trail is, overall, quite safe.

“When you look at many other parts of Philadelphia, this is actually a low-crime area,” offers Lyons. “But for some reason, the trail gets all the attention. That said, this is obviously a major issue when an assault like this occurs. And I have no idea how to solve the problem, because it’s systemic. Just look at the Harvey Weinstein headlines: men acting like assholes and thinking that they can do this to women. From a young age, men need to be told that this kind of behavior is simply not acceptable. But that’s not happening.”

Lyons says that his town watch fizzled out due to a lack of commitment from the community. But another one does exist.

Anthony Murphy, of the Philadelphia anti-crime group Town Watch Integrated Services, says that his group has trained more than 80 trail users on how to spot and report problems and that, based on his experiences, incidents like the one from Tuesday seem to be few and far between — or they’re simply not being reported.

Philadelphia City Council member Kenyatta Johnson, who has been involved in Schuylkill River Trail safety since reports of problems emerged in 2015, says that it looks like cameras will soon be installed along the trail.

“It’s my understanding that electrical wiring for security cameras has been completed and security camera installation is expected by the end of the month,” Johnson says. “Crime and violence on the Schuylkill River Trail is unacceptable and decreases the ability for everyone else to enjoy themselves when using a public resource safely.

“I commend trail users who stand up to report any incidents, and I urge everyone else to speak out. If you see something, say something. Be sure to call the police so these incidents are never ignored. File a police report, go to your police district community meetings, and make your voices heard.”

As for the South Philly woman who reported the attack to police on Tuesday, we asked her if she’d be changing her running behavior, such as running with a partner.

“I shouldn’t have to,” she insists. “People always say you should run with someone. But why should I need to have protection? I should be able to do what I want and go where I want whenever I want. Just like men do.”