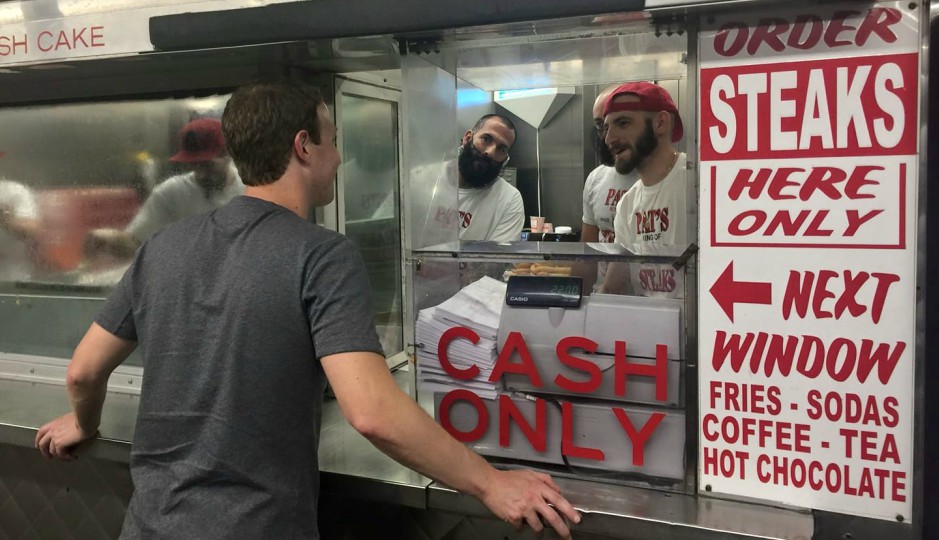 So much, in fact, that he apparently posted to Facebook eight times about his visit to 9th and Passyunk last night for the “best cheesesteak in the land.”

The 33-year-old Facebook founder and CEO ordered six steaks (Whiz wit, of course), according to Pat’s owner Frank Olivieri. Both were over the moon about it.

“The king of social media visits the king of steaks and declares from one king to another the ‘best steaks in the land’,” Olivieri said. “He bestowed the highest honor possible.”

Pat’s night manager Mikey Boninfante said Zuckerberg and friends showed up around 11:30 p.m., ordered the steaks, “sat down and enjoyed themselves for a good 20 minutes” and then left.

“My buddy’s like, ‘That’s Mark Zuckerberg,’ and I’m like, ‘What’s he doing around here?” Boninfante said. “It was definitely interesting to meet a billionaire. And they didn’t mess up the order, so that was good.”

Zuckerberg was apparently in town on business related to a scuffle with SEPTA (yes, SEPTA) and several other Facebook shareholders.