Villanova Alum Sells Off The Pavilion, One Board at a Time

A Main Line attorney is turning wood from the Wildcats court and bleachers into priceless mementoes of the venerable arena as it undergoes renovations. 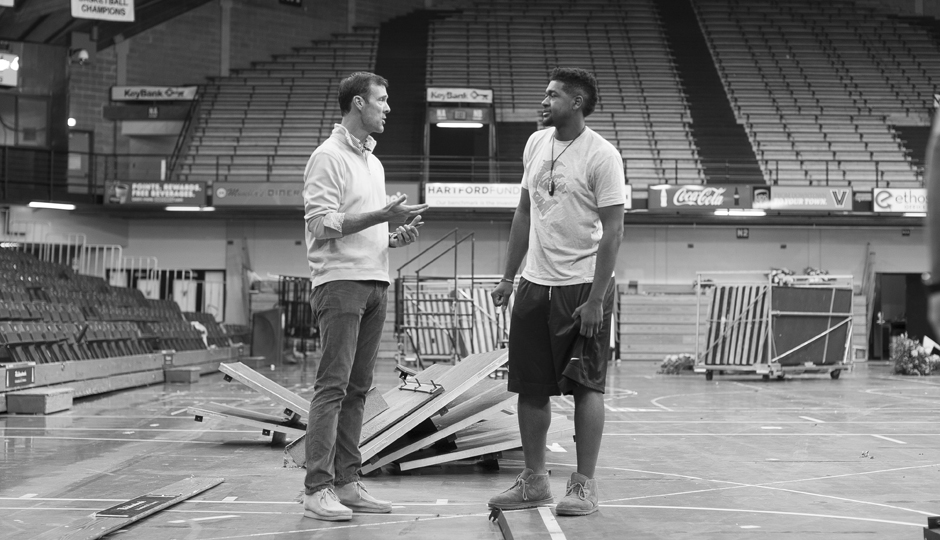 Twenty-five years ago, Main Line real estate attorney Scott Reidenbach was a senior at Villanova University and a rabid Wildcats basketball fan during a time when there were few moments worth cheering at “The Pavilion.” The bitter rift that resulted in legendary coach Rollie Massimino’s swift resignation was still fresh and Kerry Kittles was then but a lowly freshman, still feeling out the talent that would guide him to Big East Player of the Year honors and a conference tournament championship several seasons later. Meanwhile that year’s squad would limp to an 8-19 record and miss out on March Madness for the second straight year.

An athlete himself, Reidenbach played baseball for the ‘Cats and through his connections in the athletics department was able to score a sweet deal that allowed him entry to basketball games in exchange for his help tidying up the arena once fans cleared out. Fast-forward to spring 2017, and Reidenbach is again on his hands and knees inside the 6,500-seat structure that’s been home to ‘Nova hoops since 1986, picking up the very trash that eluded him decades ago. 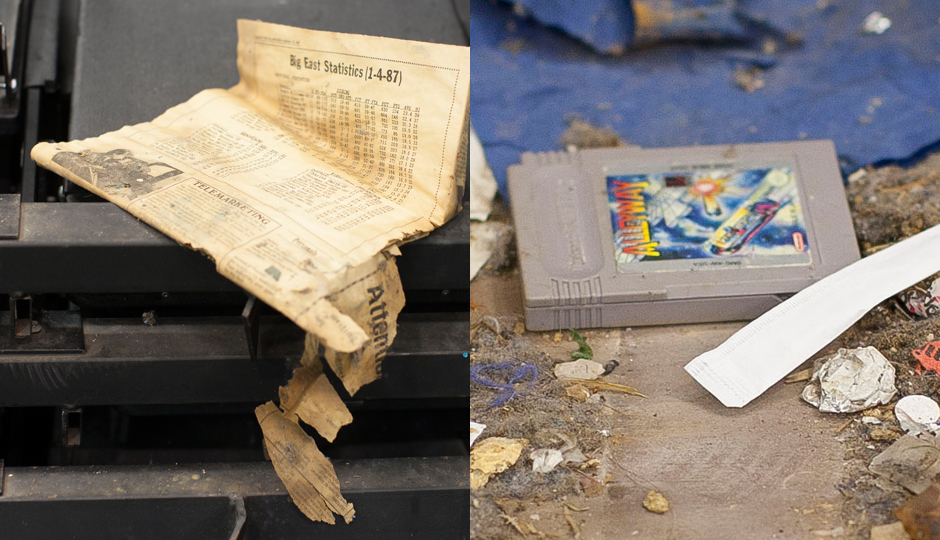 The Pavilion was at one time named for the famous murderer who helped fund it back in the ‘80s – John Eluthère du Pont, the local heir who you’ll remember as the subject of the Academy Award-nominated film Foxcatcher. Villanova dropped the “du Pont” on the building in 1997, just after the peculiar philanthropist was convicted in the fatal shooting of Olympic wrestling champ Dave Schultz. That was the last major change for the venerable arena until the school announced plans for a major $60 million overhaul this past February.

“It was weird because when ‘Nova got knocked out of the tournament by Wisconsin, it was pretty abrupt,” Reidenbach recalls. “I remember hearing back then that The Pavilion was being renovated, although I didn’t know much about the plans for it. But I had this thought: What were they going to do with all of that stuff?”

Luckily, Reidenbach knew just the right people at the university to talk to. (The Wayne resident is Villanova blue-and-white through and through – he met his wife, Sheryl, in school and they even were married at the on-campus chapel). Soon he was chatting up Josh Heird, an associate athletic director who encouraged Scott to write a proposal outlining his thoughts for the demolition. 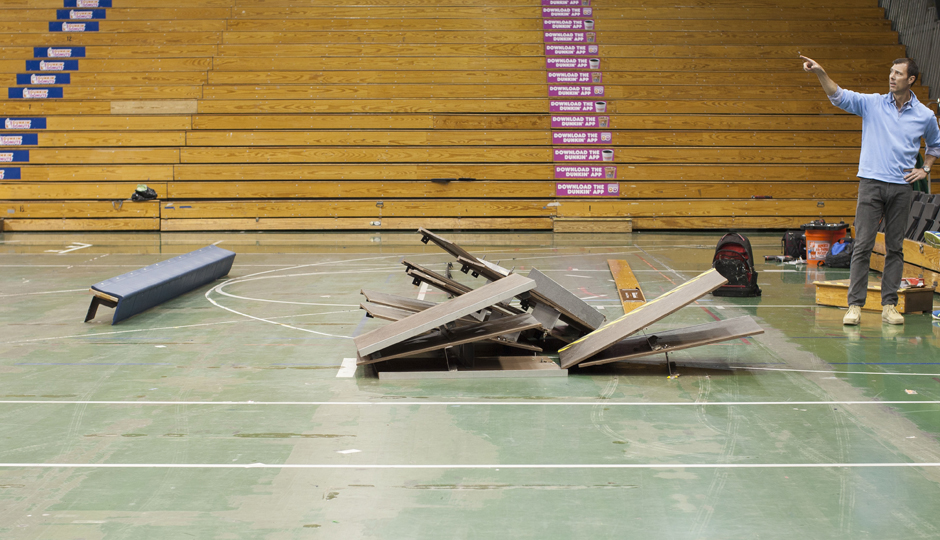 “I had never done something like this before – taking over an old arena – but as a business and real estate attorney I’d worked on similar deals and thought I could figure it out,” Reidenbach tells Philly Mag. After submitting a letter of intent, Reidenbach didn’t hear back from Villanova for some time. He started getting worried upon hearing news that construction on The Pavilion was set to kick off in May, but Scott’s alma mater came back with word that his proposal had been accepted just in the nick of time. “It was Tax Day,” Reidenbach recalls. “I’ll never forget that.”

Now that he acquired the contents of the pre-facelift Pavilion (financial terms were not disclosed), Reidenbach needed to get work on his passion project – and quick in order to meet that deadline. He and his wife (along with an around-the-clock work crew) itemized and broke down everything from the court and bleachers to the scoreboard and hanging banners. They had the place cleaned out and completely stripped in five days. “Actually it could’ve been four, but the trucks left on day five,” Scott says. “It went amazingly smooth.”

You can check out more cool shots of the disassembly work here. 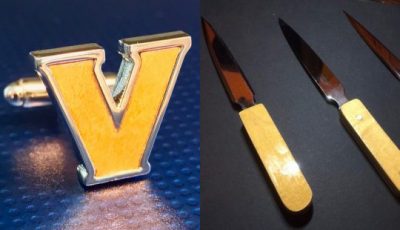 With this treasure trove of Villanova basketball memories left over from the picked apart arena, Reidenbach is selling many items as-is on his website, vupavilion.com. You can purchase a section of the court for $10,000 or even a ‘Nova-branded press podium for a cool $3,000. If small items are more your thing, Scott’s got you covered, too. Cufflinks and letter openers fashioned out of the wood court are on their way. Reidenbach says he researched past stadium demolitions and came up with new ideas like stepstools made from the bleachers: 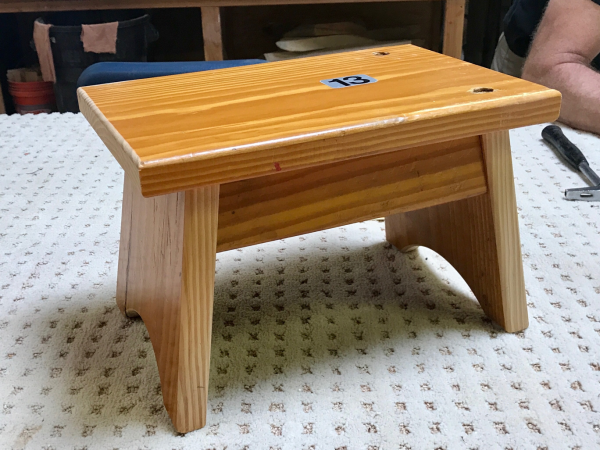 A portion of the proceeds goes directly back to Villanova University. “I literally spent four years cleaning The Pavilion up,” Reidenbach says. “And now I’m still here picking up trash 25 years later. Our passion is to preserve the items, preserve the memories and get them into the hands of the fans. Villanova has been a great partner for us from the get-go. Being a Villanova basketball fan and an alum, it’s been a great experience bringing together my passion for the university, it’s athletic program and basketball team.”