The Constitution Center: The Museum No One Cares About

Everybody loves the new Museum of the American Revolution. That’s bad news for the Constitution Center. 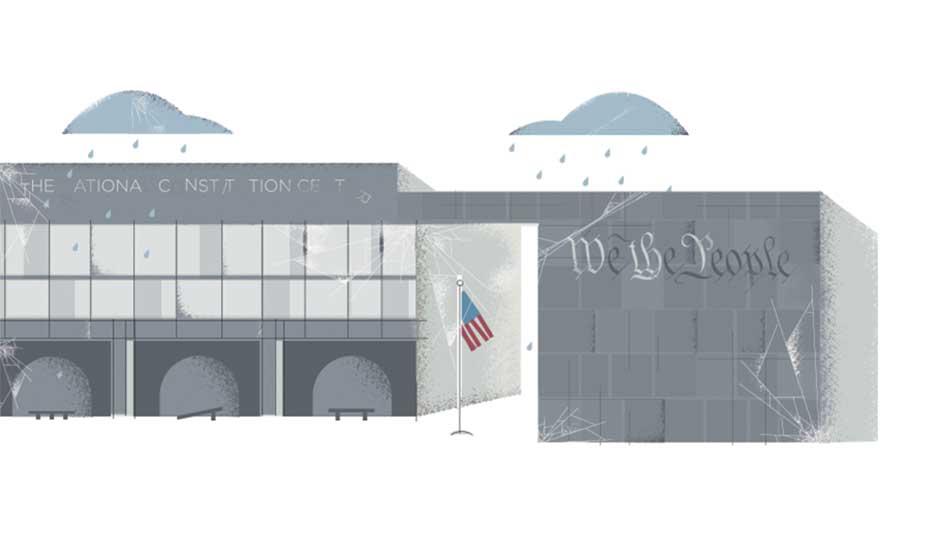 When was the last time you were excited about the Constitution Center — the 160,000-square-foot behemoth of a tourist attraction on Independence Mall? We asked ourselves, our friends and some random folks that question. No one had an answer.

Sure, there was plenty of hopeful hoopla back at the center’s July 4, 2003, opening. There were dignitaries. And news cameras. And national raves at a time before the world had caught on that Philadelphia was cool. The New York Times gushed over the center’s “perfect union of function and form.”

There have been a few blips, bleeps and truly important moments there since then, most notably Barack Obama’s election-winning speech on race. But mostly, the center’s profile has been fading like Colonial ink.

Who can forget the Princess Diana exhibit, celebrating the life of a dead English princess in a place that’s supposed to honor America’s founding document? More recently, the center spent a ton of money to develop an interactive online Constitution that some cynics scoff looks and feels like your company intranet. And in March, with the Trump administration’s behavior raising all sorts of fascinating constitutional questions, the center opened an exhibit on Prohibition. Yep, the same subject it already tackled back in 2012.

Insiders say a lack of vision is causing the Constitution Center to wither from within. A number of key employees have recently jumped ship, including at least four vice presidents in the past year. Attendance is also a long way from the million visitors expected annually when the center opened. “On some days, you can throw a golf ball inside and not even come close to hitting a tourist,” laments one former employee. In 2011, about 810,000 people visited the Constitution Center. Last year, that number had dropped to 650,000 — though less than half actually paid. Constitution Center CEO Jeffrey Rosen says this year’s attendance will likely increase.

“Morale is high,” insists Rosen, who’s run the museum since 2013. He adds that America’s “excitement about the National Constitution Center has never been higher.”

Still, it can’t help that this spring the Museum of the American Revolution opened down the street to thunderous applause, leaving some to wonder what its success means for the Constitution Center in the long run. “Think about it,” one former employee tells us. “You’re here maybe a day and a half. You go to the Betsy Ross House. You see the Liberty Bell. And then you have a choice: Do you go to the new place that’s actually smart and engaging? Or do you go to the place nobody cares about?”

Published as “The Museum No One Cares About” in the September 2017 issue of Philadelphia magazine.