The Eagles defensive end told his teammate “I’m here for you” before planning the joint gesture. 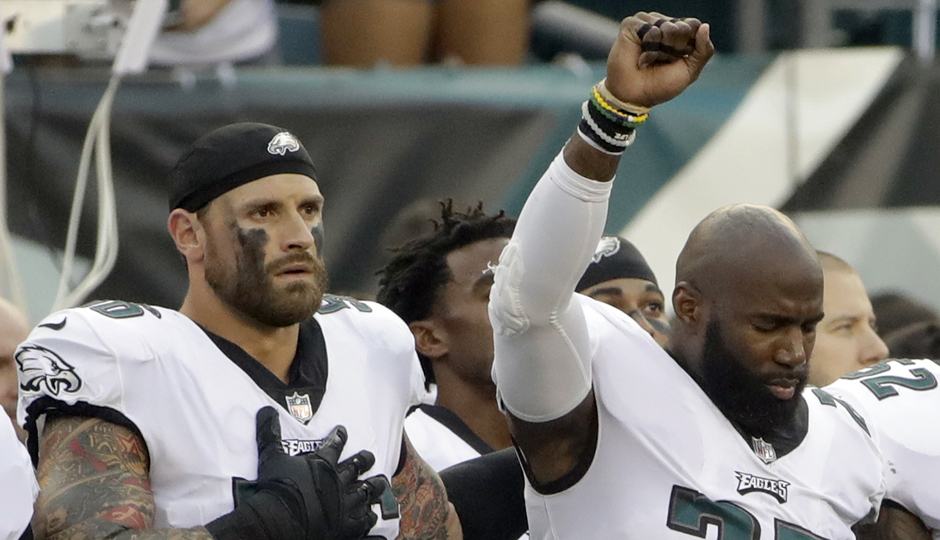 In all but one game last season, Eagles safety Malcolm Jenkins stood for the National Anthem with his right fist raised firmly in the air – a gesture symbolizing his displeasure with the continued mistreatment of minorities in this country. (The only game that Jenkins’ protest didn’t occur was the season opener on September 11th, which he said was out of respect for that date’s significance).

Newly signed defensive end Chris Long has been an ardent supporter of NFL anthem protests and in recent weeks established himself as a welcome voice speaking to the issues plaguing his hometown of Charlottesville, Virginia. He echoed Seattle Seahawks pass-rusher Michael Bennett’s sentiment that the peaceful demonstrations would hold more weight if white players stepped up and joined in.

Long did just that during the Eagles’ second preseason game at the Linc on Thursday night, wrapping his arm around Jenkins’ shoulder during the anthem as a sign of solidarity and brotherhood.

“It’s been a hard week for everybody,” Long said. “I think it’s not just a hard week for someone being from Charlottesville. It’s a tough week for America. I’ve heard a lot of people say, ‘You need white athletes to get involved in the anthem protest.’ I’ve said before that I’ll never kneel for an anthem because the flag means something different to everybody in this country, but I support my peers. And if you don’t see why you need allies for people that are fighting for equality right now, I don’t think you’ll ever see it. My thing is Malcolm’s a leader and I’m here to show support as a white athlete.”

“This is a moment in time where he feels the need to kind of take that step and lead, and I appreciate that,” Jenkins said.

This, however, is just a small step on the road to universal recognition of the issues our country is presently facing. And social media gives us a clearer idea of why these discussions need to be had in the first place. Check out some of the despicable responses to Inquirer reporter Jeff McLane’s tweet:

Chris has no problem with this now that his career is all but washed out. Make a difference without insulting a nation. Some Patriot he is.

In a league that's mostly black…….boo hoo! Get over it.

This is why I stopped watching football!