Long, a UVA alum, and Jenkins jumped all over Trump’s response to the Nazi rally on social media. 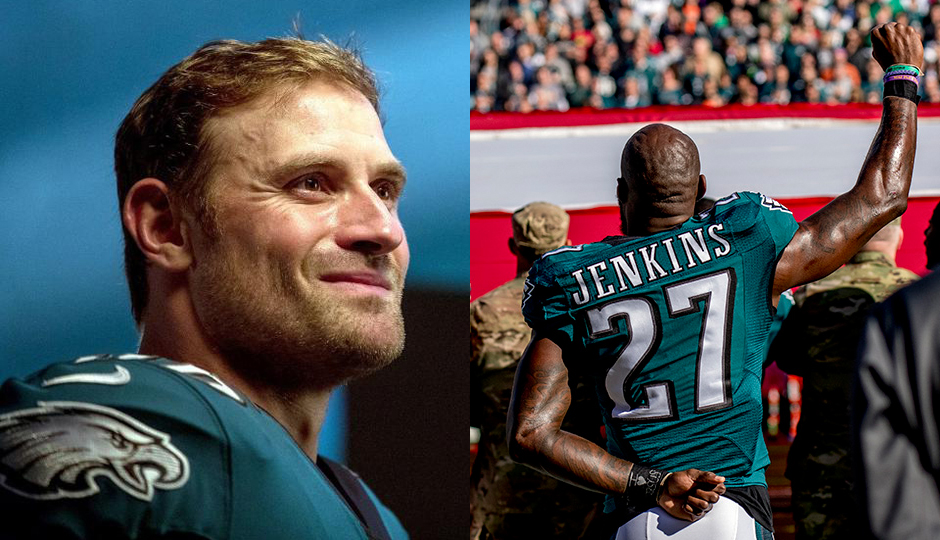 By now I assume we’re all aware of the pure evil that came out of the shadows and reared its ugly head in Charlottesville, Virginia over the weekend. If not, here’s a good retrospective of the reprehensible – and utterly pathetic – Nazi/KKK rally that very predictably escalated into a violent affair on Saturday, leaving a 32-year-old woman dead and at least 34 injured in its wake.

(I’m DONE calling these losers “white nationalists” or some other sanitized term for racists, by the way – they’re fucking Nazis – unless they’re the clowns in KKK robes. It’s kind of hard to settle on a label for these lowlifes since neo-Nazis and the Klan have seemingly joined forces in recent years like some bigoted version of the Mega Powers).

The Eagles have several players who are active politically and socially, including new defensive end (and Charlottesville native) Chris Long and safety Malcolm Jenkins. A lot has been said during this tense time about how sports are meant to serve as a distraction from all of the negativity dominating headlines. Absolute nonsense. And Long, no stranger to this type of activism, agrees:

Chris Long, who's from Charlottesville and went to UVa., feels a responsibility to speak up about what's happening there. Here's why: pic.twitter.com/9vHFk6zjEp

If they so choose, there are (rather unfortunately) few more impactful voices than a famous athlete’s when serving as a role model. Sorry, Sir Charles, but it’s true. We need more guys like Chris and Jenk stepping up to affirm that we have a higher moral obligation as Americans to denounce these fearmongers and put them in their rightful place – the gutter.

This would be a moral layup yet you go with "on many sides." Unreal. https://t.co/Cb5XjFmrdH

Wow… to think that failure to condemn white supremacy is a form of political self preservation in America right now…. tough day.

Today would've been a good time to use your "fire and fury like the world has never seen" Don't tell me you're getting soft on terrorism now https://t.co/OaFHyJbTfl

I pray that those in positions of power and leadership use their stations to push love and justice to victory so that the people may rest.

It’s a sad day when two football players and the Mooch offer more poignant responses to a national tragedy than the president. And to those who say Trump has nothing to do with this rally, get real. Torch-bearing “protesters” were literally dressed like him while marching on the campus of the University of Virginia, Long’s alma mater.