In a letter that surfaced this week, Sessions asked congressional leaders to undo federal safeguards for medical marijuana programs. 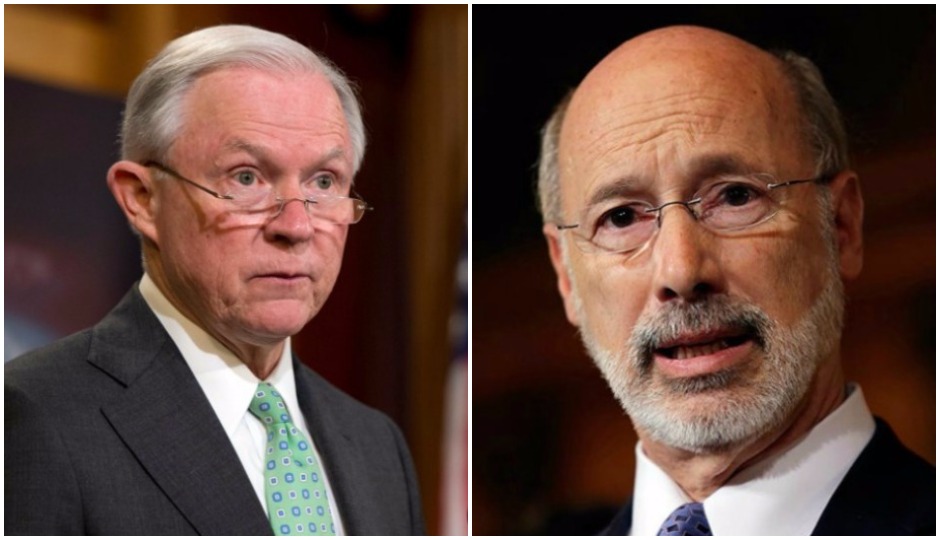 The letter, which Sessions sent to congressional leaders in May, seeks to undo federal medical-marijuana protections. Sessions asked Senate Majority Leader Mitch McConnell, House Speaker Paul Ryan, Senate Minority Leader Charles Schumer and House Minority Leader Nancy Pelosi to alter a 2014 amendment to allow the Department of Justice to use funds to prevent states from allowing the use, distribution, possession or cultivation of medical marijuana.

Wolf has responded to Sessions’s request with his own letter to the attorney general. In his memo, Wolf references the “bipartisan and medical consensus for medical marijuana in Pennsylvania,” where “we have taken very careful and deliberate steps to implement the law so that those who are suffering can get relief while ensuring that the state is a responsible steward of the program.”

The governor warns that he would “seek legal action to protect our residents and state sovereignty” if Sessions continues to “pursue this federal shift and Congress were to agree.”

Here’s the full letter from Wolf to Sessions:

Last year, the Pennsylvania General Assembly passed bipartisan legislation to legalize medical marijuana that I was proud to sign into law. The legislation was the result of conversations with Republicans and Democrats and fierce advocacy from families of children who were stricken with terrible illnesses that could be helped by medical marijuana.

We talked to kids who suffer dozens of seizures each day. We met veterans who have seen absolute terror and seek relief from the effects of their post-traumatic stress. We approached the responsibility of providing relief to the people of Pennsylvania very thoughtfully.

Since I signed the legislation, we have taken very careful and deliberate steps to implement the law so that those who are suffering can get relief while ensuring that the state is a responsible steward of the program.

We do not need the federal government getting in the way of Pennsylvania’s right to deliver them relief through our new medical marijuana program.

Your action to undo the protections of the Rohrabacher-Farr amendment, which prevents the use of federal funds to disrupt states’ efforts to implement “their own State laws that authorize the use, distribution, possession or cultivation of medical marijuana” is misguided.

If you seek to further disrupt our ability to establish a legal way to deliver relief of medical marijuana to our citizens, I will ask the Attorney General of Pennsylvania to take legal action to protect our residents and state sovereignty.”