The Birds have home games against Oakland on Christmas and Dallas on New Year's Eve. 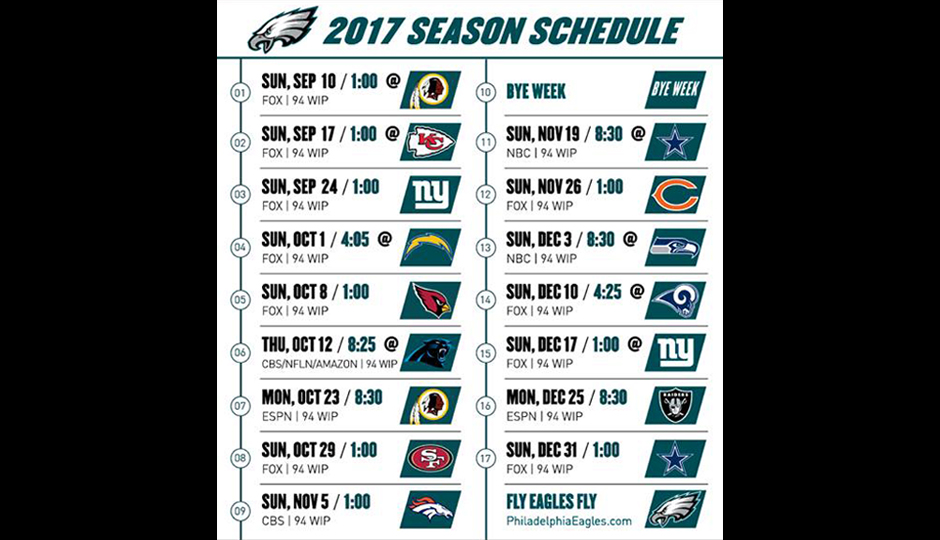 Following the Thursday-night release of the 2017 Eagles schedule, today is the day when every Birds fan is a master prognosticator, predicting either unattainable highs or pessimistically foreseeing unbearable lows.

With rookie sensation Carson Wentz heading into year two, there admittedly is reason for fans to be optimistic, but many variables remain unknown.

We know that the Birds are the recipient of a late bye week this year, which wasn’t the case in 2016. Last season the early bye messed up the team’s 3-0 mojo as they came out flat against the Lions in Detroit in Week 5. This year’s Week 10 bye gives the team some extra preparation time before playing on the road in Dallas.

There are some intriguing games among this year’s slate, highlighted by a Monday-night clash with the Oakland Raiders at the Linc on Christmas and a 1 p.m. showdown with the Cowboys at home on New Year’s Eve.

Who’s up for partying straight through Mummers?

Other games of note are Week 12 against the Bears (when Wentz’s shiny new toy, Alshon Jeffery, faces off against his former team) and the Birds’ West Coast swing through Seattle and Los Angeles in weeks 13 and 14.

The Eagles will also be playing in L.A. in Week 4. The team petitioned the league to schedule them back-to-back road games in La La Land but were ultimately rebuffed.