What the Museum of the American Revolution Gets Wrong — and Right

Our newest attraction is middle-school history told through a lens of identity politics, but the artifact exhibits can’t help but move the spirit. 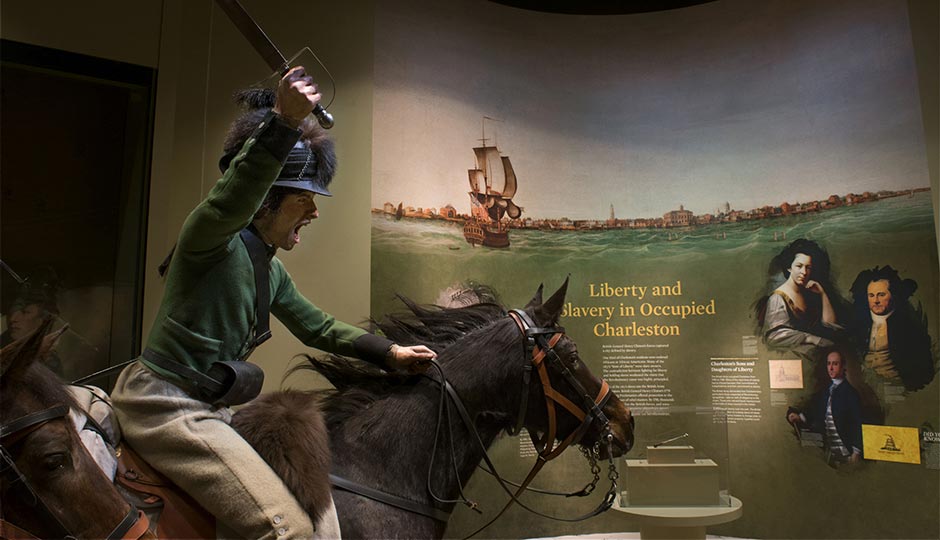 Some of the criticisms leveled at the city’s new Museum of the American Revolution have been architectural. The red-brick Georgian building at 3rd and Chestnut streets is architect Robert A.M. Stern’s modern spin on historic architecture, which some see as a retrograde design that betrays the museum’s progressive message. While it’s true that Stern’s work may be currently out of fashion, imagine the design disaster had a modernist like Frank Gehry signed off on the museum’s blueprints — Philadelphia might now be host to a building that resembled Marcel Duchamp’s (non-flush) Fountain.

Once you enter the museum, you sense the rich presence of tradition, especially on seeing the oversized painting “The March to Valley Forge” and Xavier della Gatta’s paintings of the battles of Paoli and Germantown. This is the Revolution as depicted in American Heritage history books: the battle among Colonialists, the occupying British, and the Loyalists. Indeed, many of the 500 objects behind glass speak to this: the muskets, military uniforms, Continental Army buttons, and especially the old knapsack “suitcase” that Washington used at Valley Forge. There’s even pair of Colonial baby shoes made from the redcoat of a British soldier. And who cannot but love the 150 photographs of men and women born before the end of the Revolution? This is probably the most powerful part of the exhibit.

But a subtle change happens when the exhibits become less about conventional understandings of the Revolution and more about our notions of equality as understood in 2017. The Wall Street Journal, which called the museum “a politically correct Revolution,” played devil’s advocate when it put itself in the mind of the museum’s creators and posited, “How can the Revolution claim symbolic power when the early republic systematically overlooked half the human race by gender, and counted the enslaved as worth—in the Constitution—but three-fifths of a free man?”

This leftward political tilt in many ways reminds me of the debacle surrounding the President’s House at 5th and Market streets. The President’s House, with its nine open-air slave reenactment videos and grade-school-like “teaching” storyboards fastened on the brick and granite walls, is filled with Readers Digest-style sound bites about the lives of presidential slaves. The only “president” we get is the down-under, glass-enclosed archeological dig showcasing the foundations of the real house built sometime between 1790 and 1800. The design message of the President’s House seems to be nothing but a judgment of 19th-century pro-slavery views by “enlightened” 21st-century standards.

The Museum of the American Revolution is the President’s House all over again, or history seen through a lens called identity politics. The word equality is mentioned so many times in connection with African-Americans, American Indians, and women that we begin to feel as if we are being lectured to like middle-school students. In a film about George Washington, for instance, the narrator stops, as if catching his breath, then announces in a slow drawl that Washington had slaves. He did? Perhaps one person in a million is hearing this for the first time.

Historical figure cutouts with a cartoon-like look arranged in “teaching” tableaux exemplify the middle-school approach. These include debates among African-American slaves and the Oneida tribes about the pros and cons of siding with the British or the patriots.

The middle-school atmosphere pervades even the exhibit titles and their descriptions. Titles like “Shock and Awe” and “A Brawl in Harvard Yard,” which depicts a fight among Washington’s soldiers, cannot help but remind us of New York Post headlines. One major child-friendly exhibit titled “War at Sea” displays a garish crayon-colored replica of a Continental battleship that recalls a display at the Please Touch Museum. The emphasis on children’s participation may be the current cultural fashion, but it rarely works in museum settings. Children need to work up to adult reading and perception levels, not the other way around.

Despite its flaws, Philadelphians can still be proud of its new museum. If nothing else, those temporary cutout figures suggest that in time they could be moved or changed, depending on the revolutionary whim of the moment.

This certainly coincides with what Philip C. Mead, chief historian at the museum, told a reporter last year: The goal of the museum is to give the Revolution back to the people. Since people always change, there’s no telling where this Revolution might go.