Should We Get Behind Jeff Lurie’s Push for the Return of Kelly Green?

We like the classic uniform colors as much as the next Birds fan — but as ugly as modern designs have become, it might be safer to stick with midnight green. 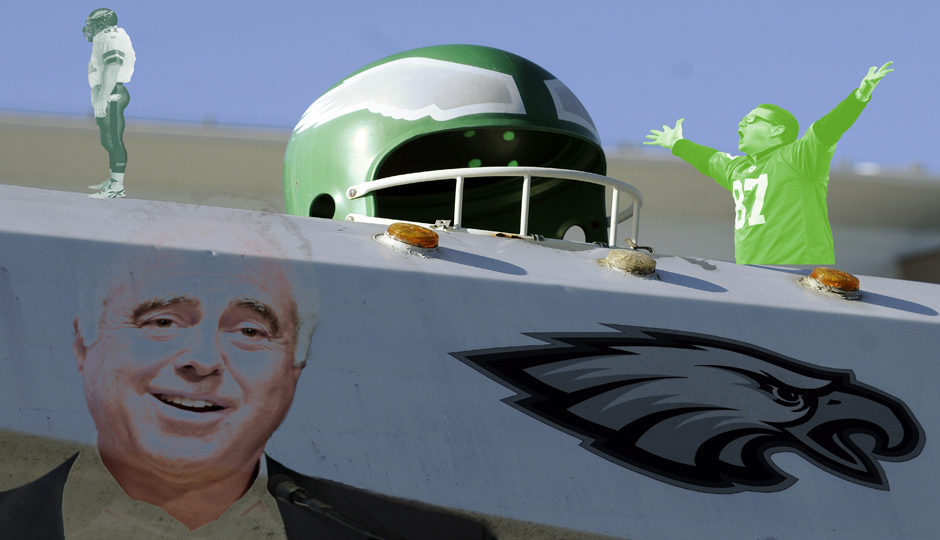 Eagles owner Jeffrey Lurie made some noise recently when he confirmed, at his annual state-of-the-franchise address, that a leaked rule change proposed (and later rescinded) by the team was put forward with an eye toward reintroducing the classic kelly-green uniforms, last worn full time in 1995.

“I want to see us use kelly green as our alternate and Thursday-night type of uniform. The only thing blocking us is we can’t get the kelly-green helmet yet,” Lurie said on March 28th at the NFL’s owners meeting in Phoenix, making reference to the league’s one-shell rule. “That’s what we’re waiting for.”

Many Birds fans have cheered the idea of the return of the team’s iconic colors of yesteryear — but I’m a bit more skeptical. While I wholeheartedly welcome the idea of bringing back the true Eagles — the colors of Randall Cunningham, Reggie White, and rookie-year Bobby Taylor — what makes the faithful so sure that Lurie would not succumb to a number of tempting mistakes along the road to seeing that back onto the field?

Have you noticed the recent updates from Nike since the 32-billion-dollar retailer started producing the NFL’s uniforms in 2012? Don’t even get me started on that gradient Jaguars helmet or whatever it is Tampa Bay got stuck with.

In a time when uniform design has sharply veered from the traditional, how could we not expect a future Eagles update to follow the same blueprint? I don’t want to see sublimated University of Oregon-style feathers on a kelly-green Eagles jersey. I don’t want to see the modern, more detailed helmet wings slapped onto a kelly-green shell like some piss-poor Photoshop job passed around on the internet.

Give me Jordan Hicks looking like a clone of Seth Joyner busting heads at the Vet in black cleats. Give me the spread-winged bird clutching a football in its talons like Eric Allen rumbling 94 yards for the touchdown at the Meadowlands. It’s proud and majestic.

Although maybe the Nest would be best served sticking with the devil we know. The current midnight-green set has been the longest-tenured uniform in franchise history. This upcoming season will mark the 20th year since the team corrected the error of those goofy stripes on the 1996 road jersey’s sleeves and went with virtually what we still see come running out of the tunnel today.

do you want the Kelly green jerseys back?

Mr. Lurie, please take advice from this humble Eagles fan: For your kelly-green revival, go with either a flawless Gang Green-era throwback design or nothing at all. But I’m only 27, and the majority of my fandom has been washed in midnight green. It suits me just fine really, but sometimes you just gotta know when to turn your “swagg” up.